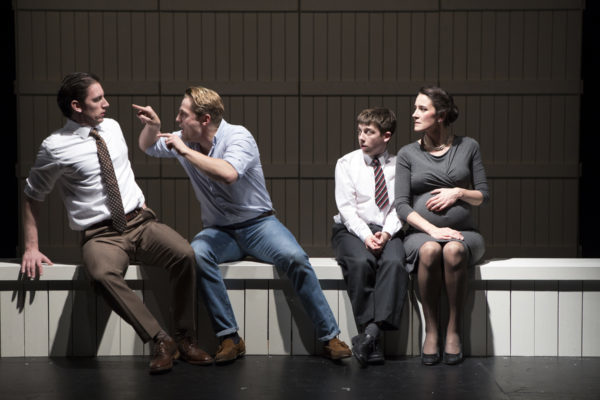 Calming music and flickering candlelight fill the auditorium as Paulina presents the long-absent Hermione back into the world.  Gone for sixteen years, her return signifies closure from past wrongs and new promises of life and family.  However, these final moments of Cheek by Jowl’s The Winter’s Tale do much more than unify the two acts of the play.  They bring a centuries-old play face-to-face with the present, forcing the audience to see themselves through past eyes.  After all, doubt, anger, love and hope have never and will never go out of style.  This effect is even more significant given last year’s 400th anniversary of Shakespeare’s death.  Though dead, his works have lived on and this production at Glasgow’s Citizens Theatre does much to remind us why.

At their core, Shakespeare’s plays are about people.  They are about the struggles, the joys, the longings and the wishes that people face as they try to go forwards with their lives.  Cheek by Jowl’s ethos, according to artistic directors Declan Donnellan and Nick Ormerod, places the actor at the centre of their works, making their process fit for tackling these issues.  This is especially apparent in their presentation of Hermione.  Traditionally the woe-begotten Shakespearean woman, Hermione is victimized by her husband and placed under extreme scrutiny for claims of adultery.  However, though the initial play focuses on her effect on Leontes, Cheek by Jowl steers clear of a ‘plot-device’ Hermione.  She is not an object to bring about change in other characters.  She is her own person, whose arc is affected but not devoured by others.  This is very much thanks to Natalie Radmall-Quirke’s portrayal of a proud and determined Hermione.  A Hermione who stumbles as the ensemble of actors storm around the stage, but continues to rise, addressing the audience head-on.  The trial scene’s use of camera projections shows this most clearly as both Leontes and Hermione are allowed time to address their peers and the audience.

Both stand behind the podium with the projector at their backs, their faces magnified so the audience may see every facial movement with extreme precision.  The exposure makes it impossible to ignore that Hermione, though accused and vulnerable, is not to be trifled with.  She makes eye contact with and challengers her naysayers, all the while choosing her words slowly and carefully.  Her emotion and power give the scene an almost political atmosphere, which, given the recent political climate of the UK, seems too coincidental to be unplanned.  It’s almost as if she’s aware that every one of her words will be dissected, edited and replayed again and again.  In newspapers, on television, even on late-night comedy specials.  She is a product waiting to be devoured by an ever-hungry media machine.  In goes a person, and out comes a caricature.  And, in the end, all this provides is a distraction from the real issue at hand: a grave miscarriage of justice.  Nonetheless, Hermione’s determination in the face of danger adds to her presentation of an autonomous and forceful woman.  A woman, though scorned and condemned by her surroundings, is anything but a foil.  Her long disappearance and later resurgence then becomes a conscience choice rather than random happenstance.  For, while Paulina hides and later reveals Hermione’s whereabouts, she seems to do so only at Hermione’s bidding.  Hermione only allows herself to be seen with the arrival of her daughter, Perdita.   While she acknowledges Leontes, she does not react with any profound feeling until she encounters her daughter.   This is her choice, and she is no longer a victim.  The audience is ultimately left with the impression of a woman touched, but never beaten, by time.

It is Hermione’s transformation from stone statue to a living being that symbolizes the play’s own theme of rebirth.  Through her, the audience not only sees a full journey of a person, but a full journey of a community.  Leontes becomes remorseful, Paulina forgiving and Perdita stable.  And, with that, the cyclical nature of humankind is splashed across the Citizens Theatre stage.  Their collective doubt, heartache, love and hope continue to collide and progress.  It is a hope that also inspires optimism for a similarly cyclical social climate.  For, despite the apparent bleakness of current affairs, it might be possible for life to imitate art.  For a revival of the old to also revive a brighter period of social, political and ecological respect.  Cheek by Jowl’s The Winter’s Tale reminds audiences that though hundreds of years old, Shakespeare’s works and their themes can likewise circle back around.  Through their characters, they may turn from stone to life and back again.

Moly Ziegler is a PhD candidate at the University of Glasgow with a research interest in Shakespeare, theatre and psychology.