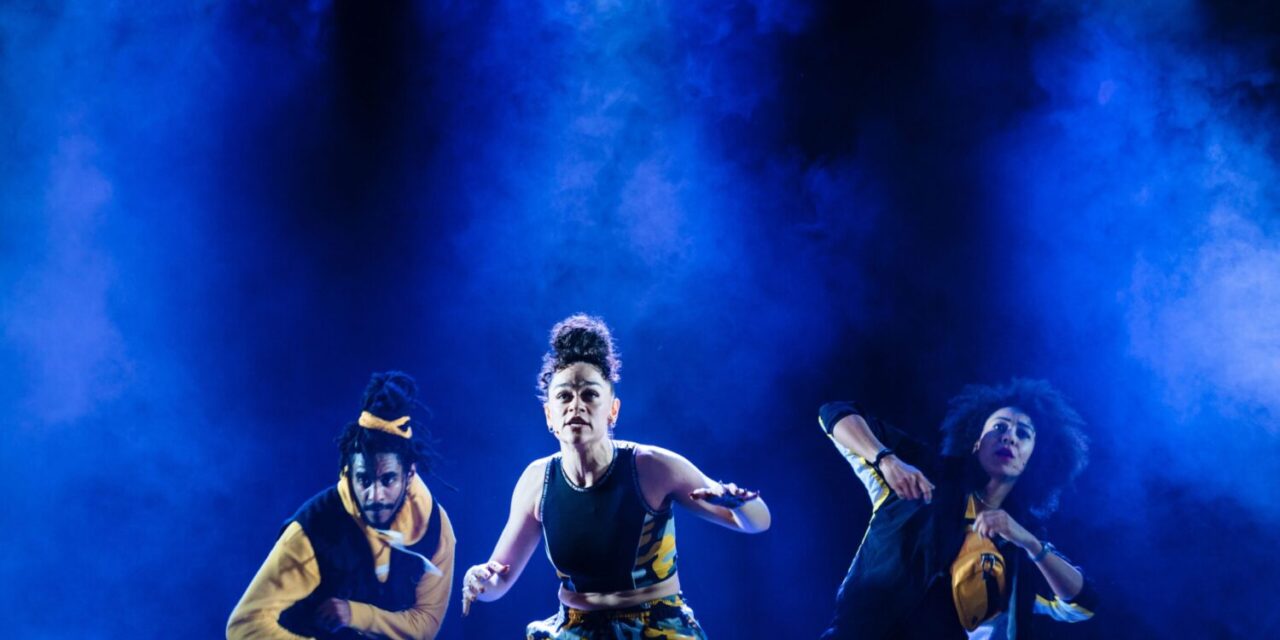 Seven years and two babies later, we are back to the Royal Court to see the revival and the opening of a national tour of Poet in Da Corner, a piece credited in the published version of the playtext, in the style of some hip hop and grime practices, as being by ‘Debris Stevenson ft. Jammz’. When the show, named after Dizzee Rascal’s 2003 album, first opened at the Royal Court in the autumn of 2018, the Guardian branded Stevenson as ‘the Kate Tempest of grime’.

This is not necessarily why we are here, being on a theatre rather than a music gig outing. It’s also worth saying, perhaps, that, unlike the author of the piece, we belong to the generation that grew up on new-wave, post-punk and rock and although one of hubby’s playlists features Bonkers by Dizzee Rascal, Nirvana is more likely to be found among our LP collection. On the way in, on a top deck of a London bus, winding around the elegant mansions and expensive fashion shops of Knightsbridge, I find myself plotting the history of the venue we are heading towards, as husband is also German and unlikely to have read in his daily newspapers about the scandals that any of the Royal Court plays had caused. I’m thinking of Sarah Kane’s Blasted (1995) which had famously produced more column inches of rage than the actual rape crimes happening in the country at the time. Several years later, the same play took the German theatre by storm under the banner of the ‘Blood and Sperm’ school of theatre, as a set of British imports came to be collectively known over there. But there is a longer line of the Royal Court curation of social anger that this play belongs to – in one direction going back to Edward Bond’s Saved (1965), in another to Tim Crouch’s  The Author (2009). All three could be seen not only in terms of their seemingly confrontational approach but in terms of the inherent value this approach placed on engaging the audience in seeing the world around them and seeing the function of theatre differently.

Since her appointment as Artistic Director of the Royal Court in 2012, Vicky Featherstone has taken this legacy and combined it with a mission for inclusion and diversity. In this respect, Poet in da Corner is a triple hit as a main-house work authored by women (the piece is also directed with aplomb by Ola Ince), performed by a predominantly black cast and drawing in brand new audiences who might be here on a music gig outing too!

On one level, Poet in da Corner is a gig, and even if you are not familiar with grime, you will soon find yourself pulsing to the compelling beat. On another level, it is an autobiographical rite of passage story about a girl finding a voice through music. Deborah of the story is dyslexic, bullied at school, growing up in an oppressive household, on the border between London and Essex, with her conservative Mormon parents and her beloved brother, the original family rascal. Debris, now telling the story in front of us, is a triumph – a poet, dancer, academic, a holder of two first-class degrees and proud winner of sexual, artistic and personal freedom. Most strikingly, however, this is an ensemble piece rather than a solo show.

Together with sparring partner Jammz, who plays childhood friend SS Vyper, and with Stacy Abalogun and Kirubel Belay in multiple roles, Stevenson delivers a tour de force of live performance which, unsurprisingly, has the audience up on its feet by the end.

The show is not always a smooth ride. Stevenson’s eloquent lyrics mix in with the slang at a speed, register, and intensity that might well suit grime but not necessarily every type of ear. That might well be the point too. Luckily, however, there is much else to marvel at visually on stage. Jacob Hughes’ modular, revolving set and Anna Watson’s lighting design are frequently clever and captivating. To top it all, Stevenson and her crew are consummate dancers as well. This show is unlikely to leave you cold. If at times you might feel like you are not the target audience due to its niche aesthetic/ sub-cultural origins, or if you happen to feel like you belong to a generation with different tastes and concerns, you’d do well to remember the Royal Court’s legacy about re-inventing the theatre’s relationship with its audience. In that respect, this show is another blast.