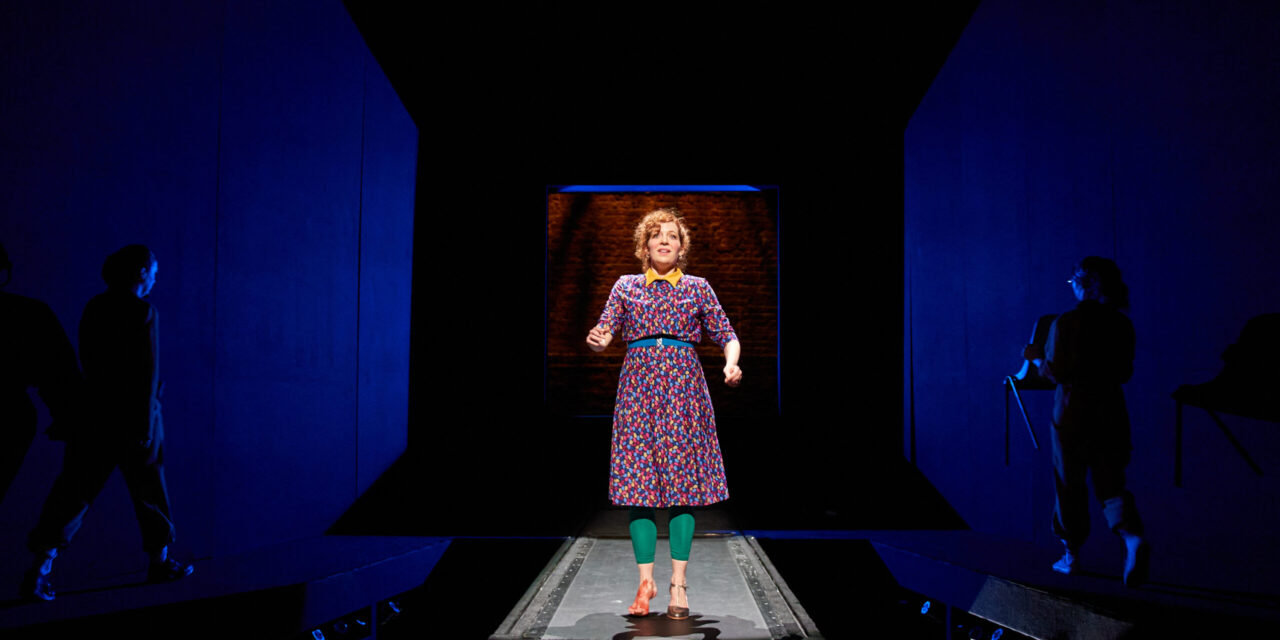 “Would you rather have one shoe or no shoes?” Viv is here to show us that missing only one shoe is not necessarily the better option. Having lost one of her shoes on the way to work, she knows how lopsided a situation this is. Her naked foot aches and bleeds; her anxious mind spins and unravels.

She is the titular character of E.V. Crowe’s Shoe Lady—a short, abstract play that grapples with the numbingly corrosive effects of work, both domestic and professional. Crowe’s prefatory note to the script makes it explicit that the play’s beef is with middle-class precariousness, with what it really takes to stay afloat, to be “part of things.” With its fragmented, largely solipsistic language, Shoe Lady offers an allegorical account of the thin line between normality and abnormality, between self-control and vulnerability.

It all begins when Viv wakes up one morning and notices that a curtain in her house is about to fall down. Before long, the curtain is on the floor. Viv knows that her husband is not handy enough to deal with it. After all, it takes a barrage of pleadings even to get him prepare breakfast for their son. It’s clear that she’s fed up, on edge, ready to burst open.

In Vicky Featherstone’s quirky production at the Royal Court, Katherine Parkinson does a tremendous job of relaying the many undercurrents of Viv’s self-effacing despair. Her façade is almost consistently bright and assured. But her lips quiver, her eyes twitch. There’s a tempest wreaking havoc inside her—one that makes its way to the surface as she walks in London with only one shoe on.

Lit starkly by Natasha Chivers, Chloe Lamford’s minimalist, black-heavy set has at its centre a runway-like treadmill, which is somewhat underutilized in Featherstone’s relatively scattershot staging. As she delivers her elusive monologues, Parkinson’s panting Viv keeps walking—indeed, limping—on this area. It’s as though she has to walk: she can’t afford to stop, just as she literally cannot afford to buy another pair of shoes. The social machine is always working, always rolling, always trying to get (her) somewhere. And Viv is stuck on it, even if it means her foot is covered in blood, even if it pushes her into petty theft. It’s an endless struggle, and this new, local pain may as well make her forget the more diffuse one.

Crowe overloads the incident of the lost shoe with various shades of sociological and existential commentary. Granted, not everything hinges on it, but it’s unclear how the play’s other components are meant to gel with this central motif. So, now is as good as any time to mention that this is, in fact, not a one-woman play. There are three actors who share the stage with Parkinson, but whose characters are bafflingly underwritten: Tom Kanji is Viv’s nearly speechless husband Kenny, Beatrice White is their son (and, later, a speaking tree), and Kayla Meikle is a homeless woman named Elaine who teases Viv in her shoeless panic. They come and go, allowing us to get to know Viv in non-solitary situations. Yet there’s likely a better version of this play that doesn’t need any of these onstage characters.

One might go ahead and say that there is something Beckettian about Crowe’s formal and verbal elisions. True, though the cumulative effect of Shoe Lady is considerably far from that of many Beckett plays. For all its engaging preoccupation with the poetry of a mind on the brink of crisis, Crowe’s play remains dramaturgically thin and—like the feet of its eponymous character—uneven. It’s good when form reflects content, but Viv’s beguiling words and gentle outcry would benefit from a sturdier shell.