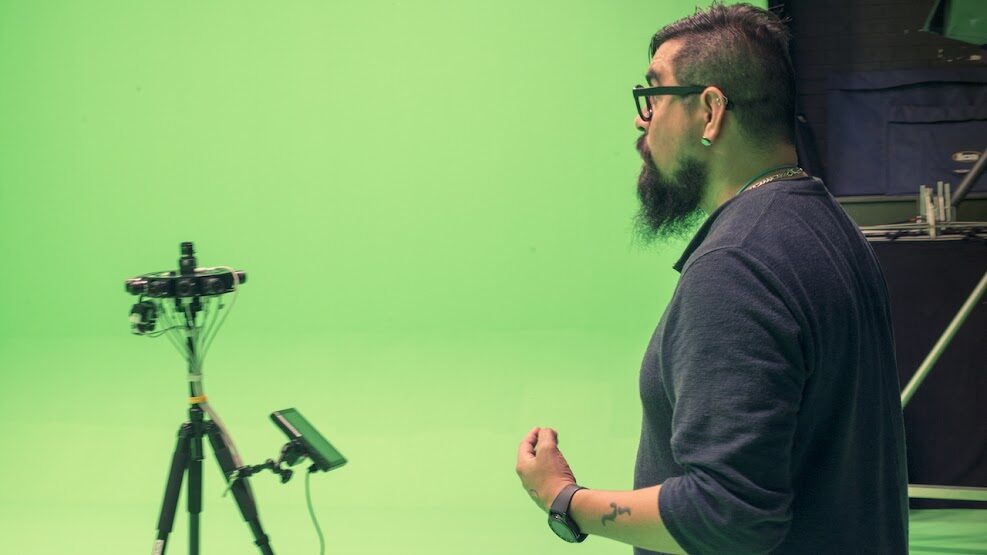 I’m a thirty-four-year-old straight woman who grew up in the suburbs with an older brother. That means I’ve spent a lot of time watching dudes play video games. I thought those days were behind me, and I never thought I’d be bamboozled into reliving this experience in the guise of live theater. But I recently saw Cosmos Within Us, or rather, watched someone see it, and all those mind-numbing hours in basements came flooding back.

Cosmos Within Us, conceived of and directed by conceptual artist Tupac Martir, is in many ways, unlike anything I’ve ever seen. To tell a story about a man battling Alzheimer’s disease, it combines live orchestration with voice-over work, dance, film sequences and, what is on its face the most innovative aspect, virtual reality. That is, one participant dons a virtual reality helmet, and what he sees is projected on screens for the audience’s viewing. All these elements are layered in such a baroque manner, they compete for our attention. Steven Weston’s fantastic original score, easily the best part of the show and expertly realized by sound engineer Sam Brodsky (Tewksbury forever) was relegated to the background of John Pirkis’ narration which is delivered directly to your ear canal via obligatory headphones. And because our eyes are accustomed to privilege screens, we are liable to overlook Eureka Nakano and Jordyn Santiago; in their role as “Shadow Dancers,” they are easily the hardest-working people on stage. It’s a pity to seem them upstaged by special effects and disembodied characters, like a CGI grandmother from the uncanny valley. (If that’s what it looks like over the river and through the woods, I’ll stay in the city.) But perhaps Martir himself doesn’t realize the quality of Nakano and Santiago’s skill; in a compulsory Q&A after the show, he referred to them not as dancers or performers but, condescendingly, as “two beautiful girls.”

Partway through the show, they seemed to forget that it was supposed to be about Alzheimer’s (the irony!). Instead, it developed into a meditation on loss. It could more fully have been one or the other. Early on, the protagonist, Aiken (achin?!) makes a self-deprecating comment about the value of his own memories, something to the effect of, “It’s not as if I discovered string theory.” Over the course of the entire performance, the closest I came to an emotional experience was when that line evoked in me a memory of Nick Payne’s play Constellations, in which a quantum physicist’s aphasia is pitted against her memories and knowledge of, yes, string theory.

In the December 2, 2019 issue of the New Yorker, Patricia Marx reviews the virtual reality equipment currently available on the commercial market. She writes, “If you’d been there, you’d have heard me say ‘Wow’! an obnoxious number of times. With no visual evidence of the outside world, it was easy to forget that I was in my kitchen.” It’s a funny scenario to encounter in a magazine, but less compelling to watch from house seats. While I grew increasingly disenchanted and even bored with the premise of the show, the dude wearing the VR helmet was positively transported by the experience he was having. I would, therefore, suggest that to make this piece as revolutionary as Martir already believes it to be, he dispense with the mass audience. An orchestra, a voice-over actor, dancers and virtual reality technology all for the benefit of an audience of one? That would be an extraordinary piece. I can imagine people waiting hours in line at a festival, or eagerly entering a raffle to take part. Let the rest of us remain curious, even jealous. But please, don’t make us watch you play video games.