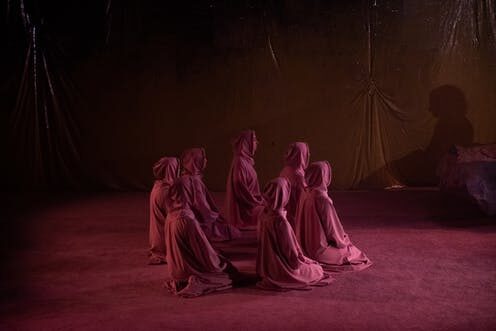 "My Dearworthy Darling": the new production from writer Alison Croggon and theatre company The Rabble. Photo by David Paterson.

In her criticism, Croggon champions good writing for the stage, rejecting the idea that the literary and the theatrical are opposing concepts. In their dramaturgy, The Rabble rejects the male-dominated tradition of play scripts, instead pursuing experimental, design-led re-imaginings of iconic stories from the Western canon.

Their philosophies met and sometimes clashed in My Dearworthy Darling, which was inspired by the autobiography of an illiterate woman, the medieval mystic Margery Kempe. It attempted to help us hear women’s voices by making them strange, asking us to listen across time and idiom.

The story happens across two times and places, contemporary Australia and medieval England. In Australia, there are three nameless characters, a woman (Jennifer Vuletic), her insurance agent husband (Ben Grant), and her sister (Natalie Gamsu). The woman is possibly having a breakdown but definitely being gaslit by her husband and sister, who tell her at every opportunity that there is something wrong with her mind, memory, or behaviour.

The woman has visions that connect her to a medieval mystic, also played by Vuletic, whose physicality and resonant voice are compelling. A chorus in monastic robes (played by Monash University performance students) supports and listens to her. 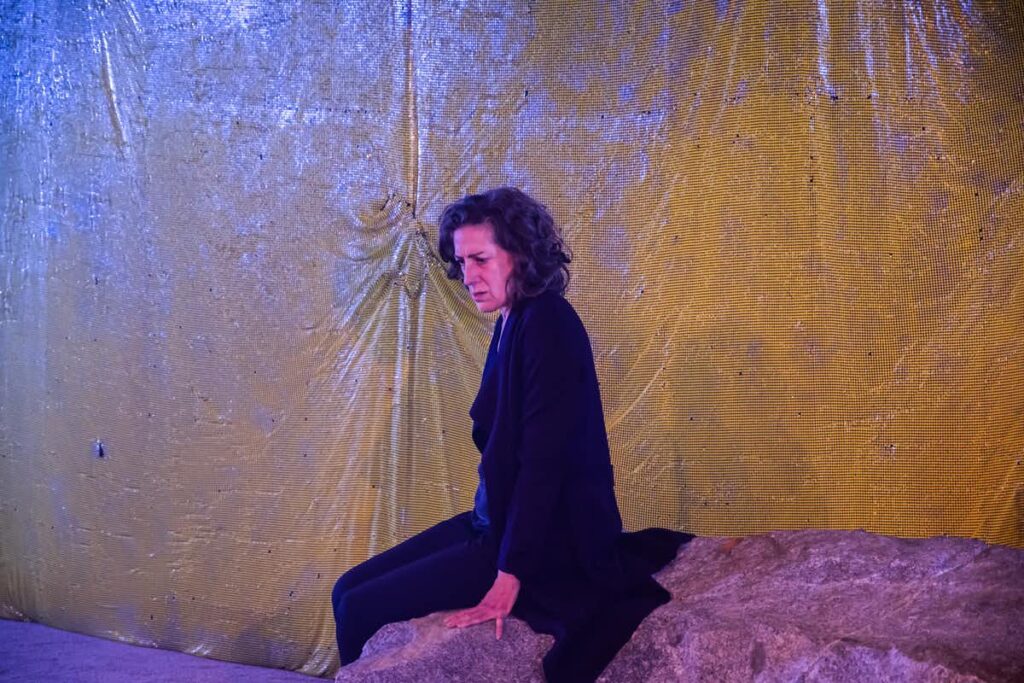 Croggan’s script and Valente’s sound design encourage us to listen, too. The three main actors were miked in a way that drew attention to the amplification of their voices, rendering them slightly alien in their audibility.

The sounds of contemporary Australia were the drone of a vacuum cleaner, the hum of an electric toothbrush, the crunch of ice cubes in a plastic cup, and the ringing of mobile phones. The sounds of medieval England were more human and less prosaic —speaking, chanting, and singing.

But one time also seemed to bleed through to the other: a vacuum switches itself on with mundane supernaturalism; a mobile phone rings in medieval England. At one point the woman places a drinking glass on the ground and then her ear to the glass, as though trying to hear the other time.

Croggan’s program note suggests the three Australian characters are “pressured and broken by the dehumanisations of modern capitalism” and “don’t know how to communicate and so hurt each other.”

These themes were perceptible in the play, but I found the husband and sister so unpleasant there seemed no reason for the woman to attempt communication with these characters, or to remain in their prosaic world. They repeatedly tried to convince the woman that she was crazy by lying to and about her, including a scene in which the husband unconvincingly tells an emergency operator that his unconscious wife has a knife and is trying to kill him. I preferred the appliances to these characters, though Grant and Gamsu are skilled actors.

In Australia, the woman repeatedly says that she doesn’t have the words to express what she is experiencing. Nor are the husband and sister inclined to listen. In medieval England, on the other hand, the woman joins the chorus in speaking words from The Book of Margery Kempe. In this way she finds a voice and the chorus becomes her onstage auditors and supporting singers.

The Book of Margery Kempe is often called the earliest autobiography in English. Kempe could not write and so dictated her visions and feelings to male scribes who wrote them down in the third person. Although Kempe was more than once accused of being a heretic during her lifetime, she is now celebrated as a woman who claimed a public voice to express her emotional, sexual, and religious experience.

Text from Kempe’s book appears throughout My Dearworthy Darling as electronic surtitles and spoken or sung dialogue. The actors’ facility with Middle English was impressive and beautiful.

Because the Middle English overlaps with but is different from our own idiom, the audience must listen carefully or relinquish conventional ideas about meaning and communication in favour of the sounds and aesthetics of Kempe’s words.

That these words are a third-person, dictated, 14th-century memoir should caution us against simplistic morals about restoring and listening to women’s voices — a problem The Rabble also grappled within their 2017 show about another illiterate medieval heroine, Joan.

My Dearworthy Darling’s use of electronic surtitles, time travel, and Middle English show how the mediations that stand between us and Kempe’s voice are also what allow us to hear it. Going back in time, shifting place and idiom, the woman finds she has both words and listeners.

Are the words her own? Croggan’s citations of Kempe and the play’s shift to chanting and choral song suggest this is the wrong question. If we want to give women words and hear their voices, the play implies, we must also disrupt and complicate the conventions of authorship and public speech that write them out of history.

We must see how mediation, estrangement, and ventriloquism facilitate as well as thwart expression.

My Dearworthy Darling is at The Malthouse until August 18.

This article was originally published on August 12, 2019 on The Conversation. Reposted with permission. Read the original article here