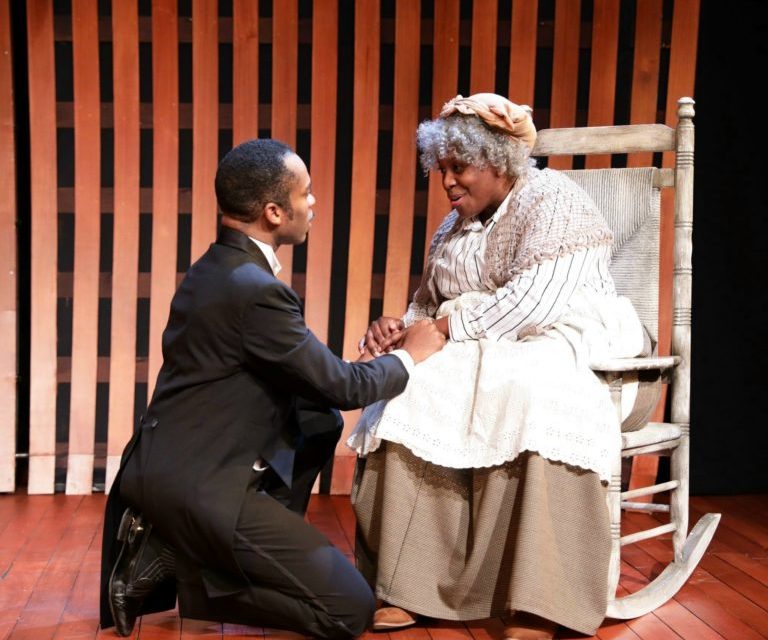 Breath And Imagination is a musical, composed and written by Daniel Beaty, largely based on the life of Roland Hayes, the first African American to achieve international fame on the concert stage. Born in Georgia in 1887 on a plantation where his mother had been a slave, he grew up in poverty. After his father’s untimely death, Hayes left school to help support his mother, Angel Mo’ (short for Angel Mother). What set Roland Hayes apart was his beautiful tenor voice.

Angel Mo’, a very religious woman longed for her son to be able to return to school and become a pastor. The two move to Chattanooga where Angel Mo’ has found a factory job for Roland where he could work afternoons while going to school in the morning. Roland had a bad accident that put an end to this plan. Soon after, however, he became renowned throughout Chattanooga for his singing.

At the beginning of the 20th Century Arthur Calhoun, a white choir director, took an interest in Roland and began coaching him despite Angel Mo’s wishes. Roland is enthralled by the classical music he is learning, although spirituals remain part of his repertory. Mother and son grew apart. Roland Hayes was accepted at Fisk University in Tennessee, a school founded after the Civil War that welcomed bright talented students regardless of race. Soon after Roland became a member of the Fisk Jubilee Singers and toured states in the South, Midwest, and Northeast ultimately settling in Boston and vicinity where his mother joined him and his career blossomed.

Due to his singing ability, ambition, and cleverness, he managed to sponsor a sold-out concert at Symphony Hall and thus became the first black performer to sing in the world famous auditorium. He traveled to Europe, stopping in England where he sang for the condescending King George V.

The play, written as a series of flashbacks, begins when Roland Hayes now 55 has returned to Georgia and bought the plantation where his mother was a slave in order to turn it into a music school attended by both black and white students. Because of a racist incident involving his wife, daughter, and himself, Hayes informs the student body that he has decided to abandon the school and go back north where his family will be safer. Throughout this scene, he winces in pain because of the beating he received from a police officer. The thrashing and the cop are recurrent.

Between the beginning and the end, we follow Roland Hayes through his experiences as a gifted black singer, which run the gamut from admiration to humiliation. In the last scene, he changes his mind and realizes the importance of his school both for the art of music and racial equality.

Davron S. Monroe who plays Roland Hayes has a remarkably beautiful voice and is an excellent actor as well. Yewande Odetoyinbo, the Angel Mo’ of the production who eventually supports her son’s secular repertory is believable as the tough, but loving mother despite the actress’s youth. She too has a lovely voice.

Baron E. Pugh has made admirable use of a stage that can be constraining by covering the floor with rich hardwood. A concert grand piano placed upstage right dominates. Although the set often represents a house, the overall impression is that of a concert stage. The furniture consists of a few chairs and a trunk. Upstage is a screen made of slats of the same hardwood with a center door used for entrances and exits.

Maurice Emmanuel Parent, a well-known Boston actor, made a successful directing début with this moving production.

Breath And Imagination is co-produced by The Lyric Stage Company of Boston and The Front Porch Arts Collective. While the Lyric Stage has been in existence for over forty years, with Spiro Veloudos as the artistic director for the last twenty, Breath and Imagination is the Front Porch Arts Collective’s first complete production. Veloudos has long been an advocate for performers of color.

The goal of The Front Porch Arts Collective is to create a Boston company comprised of black and brown artists both onstage and backstage. Unlike many other cities in the U.S., Boston lacks a professional black theatre. While opportunities for minorities have grown over the years in the area, the Front Porch Arts Collective wants to be able to make the decisions that will define the company’s work.

Breath And Imagination runs through December 23, 2018, at the Lyric Stage.

This article appeared in Capital Critics’ Circle on December 6, 2018, and has been reposted with permission.