In January 2019, as part of the 3rd Chicago International Puppet Theater Festival, Chicago will play host to three established French companies: La Pendue, Plexus Polaire and, with co-presenter Chicago Shakespeare, Non Nova. In fall of 2019, The Festivals Exchange will continue with a curated series of reciprocal performances by U.S. artists at the World Puppetry Festival in France.

Presented in partnership with Dance Center of Columbia College Chicago

2017 Chicago Puppet Festival opener Plexus Polaire returns to Chicago with Chambre Noire, a wild hallucination around the deathbed of Valerie Solanas: radical feminist, creator of the SCUM Manifesto, the woman who shot Andy Warhol, a character that is complex, multi-sided, outrageous, and absolutely human. Inspired by Sara Stridsberg’s novel The Dream-Faculty, this performance is a duo with puppeteer Yngvild Aspeli and percussionist Ane Marthe Sørlien Holen, with life-sized puppets, broken songs, video-projections, a good dose of humor and a desert of solitude.

Yngvild Aspeli, artistic director of Plexus Polaire, develops a visual universe that gives life to the most hidden feelings. Most of her works are inspired by literature.

She is a puppeteer. He is a musician. Life and death are playing in their cabaret. The big imaginary machinery they are activating together strangely looks like the one which presides over our destinies: the Ancients believed this weaving loom belongs to the three Parcae–Tria Fata–where the threads of our lives are weaving, uncoiling and breaking.

La Pendue, Theatre Company, puppets, and sensitive metamorphosis was created in 2003 in Grenoble by Estelle Charlier and Romuald Collinet, two former pupils of the National School for Puppetry of Charleville-Mézières.

Prepare to be blown away! France’s Compagnie Non Nova takes an ordinary object—a flimsy plastic shopping bag—and transforms it into something magical. Anthropomorphized plastic figures take flight buffeted on invisible waves as a performer manipulates them with precise, complex choreography, creating an intoxicating visual ballet out of the everyday.

Companie Non Nova was founded in 1998 by Phia Ménard with the desire to approach juggling from a different angle, through the scenic and dramaturgical structure of each piece.

Supported by the Cultural Services at the Consulate General of France in Chicago and the FACE Contemporary Theater, a program developed by FACE Foundation and the Cultural Services of the French Embassy in the United States with the support from the Florence Gould Foundation, Institute français-Paris, the French Ministry of Culture and private donors. Additional support for women artists has been provided by Foundation CHANEL.

This article appeared in French Culture and has been reposted with permission. 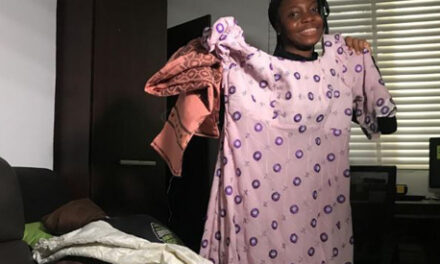