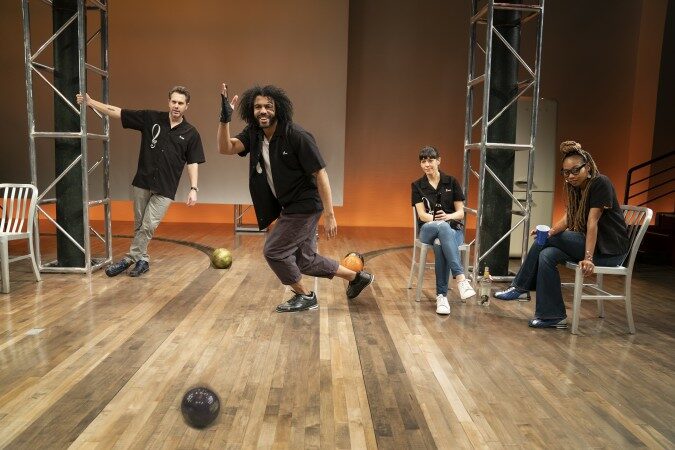 Suzan-Lori Parks has written a dark and disturbing allegory about the seemingly impossible dream of a post-racial United States. As you’ve probably heard, White Noise (now nearing the end of its run at The Public Theater in Oskar Eustis’s production) is about a young black man—a college-educated, present-day painter—who is roughed up by the police one night and decides that the only way he can work out (“transcend”) his feelings of powerlessness is to sell himself as a slave to his best friend.

Perhaps you found this premise as familiar as I did when you heard it. Pretty much the same outrageous idea propelled one of the most celebrated novels of recent years, Paul Beatty’s Man Booker-winning The Sellout, which I read when it appeared in 2016 and deeply loved. Curiously enough, only one critic I know of (Robert Hofler) has even mentioned this comparison in passing and none have examined it. It’s worth considering, though, if only briefly, because it illuminates Parks’s drama.

In both works, a black man in career doldrums who is desperately upset by racist humiliations insists that a close friend relieve his feelings of pointlessness and ineffectuality by formally adopting him as a slave. It’s an ironically regressive gesture, meant to be read politically in both works, that shines a spotlight on various forms of blindness, bad faith, and denial, black and white. There are obvious differences between the works. Beatty’s is antic, fluid, and tactically hysterical—a hilarious and blistering satire. Parks’s is earnest, carefully carpentered, and faintly didactic—a quasi-realistic allegory. Also—no minor matter—Beatty’s slave-owner is black where Parks’s is white.

Yet the contrast here is telling. The difference between using an antic and a serious tone with such a fantasy is the difference between opening our imaginations expansively to its larger implications and blocking imagination with questions of plausibility. Beatty conjures an amazing, carnivalesque world out of all the hatred, opportunism, and moral laziness he evokes and exaggerates. Parks soberly selects a few typical instances of such hatreds and lazinesses that she knows the theatergoing class will recognize and depicts them in vivid detail. This is powerful in its insular way, but it does rather narrow the conjured world to a horrific parable of irreparable mistrust and antagonism.

White Noise introduces us to four friends, two white, two black, who have been close since they met at a small liberal arts college about fifteen years earlier. They once formed a band and hooked up in different ways. The guys were bowling stars. Now they’re configured as a pair of hetero, interracial couples who groove to their old songs and bowl together once a week for fun. (The set by Clint Ramos features a clever facsimile of a bowling lane that’s actually used.)

Dawn (Zoe Winters), a “do-gooder” lawyer who joined a second-rate firm to gain experience defending “hopeless cases,” is with Leo (Daveed Diggs), the painter and chronic insomniac who will enslave himself. Ralph (Thomas Sadoski), a blocked and possibly talentless writer, is an untenured college professor who grew up poor but is now rich after inheriting a chain of bowling alleys from his absentee father. He is with Misha (Sheria Irving), the smartest among them, who self-produces and stars in a weekly live-stream call-in show called “Ask a Black.”

Each one of these characters has a long monologue that supplies detailed background information. We do know a lot about them. Nevertheless none of them ever quite comes across as a fully rounded human being. That’s the drawback of deliberate allegory (think of plays like Frisch’s The Firebugs and Dürrenmatt’s The Visit): its characters are always a bit predictable because, no matter how surprising or well-constructed the plot, their actions are contrived to hit pre-planned structural milestones rather than flow with the quicksilver randomness of real life.

It’s a credit to Eustis and his extraordinary cast that Parks’s people actually do feel real about half the time. Diggs, in particular, is so charismatic as Leo he can charm us into losing our compass for contrivance and implausibility for twenty minutes at a time. Also—and this is important—the play’s contrived milestones are weird and diabolical enough to be genuinely upsetting. Don DeLillo once used the title White Noise to refer to death and fear of death. Here it refers to both a white noise machine that Ralph bought for insomniac Leo years ago to help him sleep and also to the potentially fatal racist reality that keeps him awake.

Leo’s violent run-in with the cops occurs just as Ralph is at maximum resentment over losing an academic promotion to a person of color. These feelings make him susceptible to the allure of playacted “mastery” that Leo’s mad proposal holds out to him: Leo will be his slave for forty days in exchange for $89,000, the amount of Leo’s debt. We know as soon as Ralph talks himself into signing this contract (and Misha talks herself into witnessing it, and Dawn talks herself into notarizing it) that the friendly and innocent playacting will soon turn toxic and real. The only truly open question from then on is how the love- and friendship-trains will leave the rails.

As you might expect, all the characters but Leo betray their partners sexually. Parks also gives each of them an ethical contradiction at work that the slavery experiment forces them to confront, and they all eventually admit their weaknesses. Dawn cops to taking “impossible” law cases for virtue-signaling and reputation-building, even admitting to defending a boy she knew was guilty just to feel her “superpowers.” Misha admits to “dial[ing] up the ebonics” and performing stereotypical blackness on her call-in show to make money, even interviewing enslaved Leo to boost viewership. And Ralph, closest of all to villainy, eventually drops all pretense to friendship and ethics and espouses the most abysmal white suprematism.

It’s all just as schematic and contrived as it sounds. But here’s the thing. The play doesn’t irritate in performance the way most such works do. There’s something bold, candid and honest about its clunky straightforwardness. The characters’ hypocrisies really are very familiar to us, and because we know they’re way too seldom dramatized we get a rush out of seeing them laid bare. The play is three hours long but it feels like two, or less, moving swiftly and intensely to a morbid, ugly, and frightening conclusion (don’t take your eye off those bowling balls) that leaves everyone in the theater feeling soiled.

No one gets to look good, Parks seems to be telling us. We are all complicit in this world that refuses to confront its structural racism. We ought to stop trying to put dramatic lipstick on that pig.

By Suzan-Lori Parks
Directed by Oskar Eustis
The Public Theater

This article appeared in Jonathan Kalb on April 23, 2019, and has been reposted with permission.