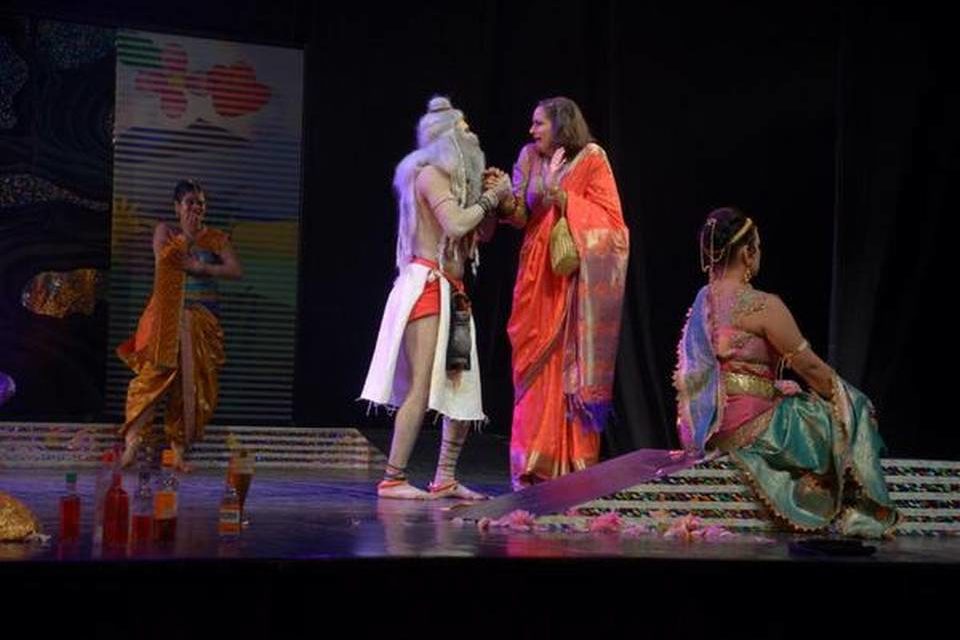 Beyond the vibrant costumes and farcical elements, Suresh Anagalli’s Bhagawad Ajjukam is a dazzling metaphor reflecting the dichotomy between reality and illusion.

Bhagawad Ajjukam, written by Bodhayan, is being seen frequently on the Delhi stage in Hindi translation. A prahasana, originally in Sanskrit, most of the directors treat it as a mere farce to entertain the audience. Its latest adapted version by Bhagwathi M., which was presented by second-year students of the National School of Drama at Abhimanch recently is a highly innovative piece of theatre.

Without distorting the narrative structure, through visual imagery, lighting effects, design, actors body movements and music, it tries to dissect the dichotomy between reality and illusion. Arguably, this kind of Bhagawad Ajjukam with such complex artistry is not seen on the Delhi stage in recent memory. It evokes laughter, dazzles with its visuals, probes in a subtle way the contrast between the world of deprivation of Buddhist monks and the glamorous life of courtesans.

The play is directed by Suresh Anagalli, who graduated from National School of Drama in 1985. Based in Karnataka, he has had a long experience of working with different leading organizations like Samudaya, Ninasam Theatre Institute, Hegodu, Rang Mandal Repertory, Bhopal, and as head of the NSD regional center, Bengaluru. The stamp of his experience and creativity is reflected in his design, stage compositions and treatment of music for a play which is essentially a Prachasana.

Deviating from the Sanskrit format, the director devised an elaborate chorus with its members in athletic costumes, dancing while singing, caricaturing the characters being delineated by performers on the downstage. These scenes are brightly illuminated by lighting effects designed by Avtar Sahni, a seasoned lighting designer. Full of energy, the movements are accompanied by a rich orchestra.

We watch Parivrajak, a Buddhist monk, and his disciple, Shandilya searching for one another in an unidentified locale. Shandilya, a Brahmin-turned-Buddhist, has changed his faith, not because of his convictions but as a Brahmin, he was not able to get enough food. Despite his adoption of Buddhism, he is not able to get enough food and mostly remains hungry. His Guru is not happy with him because he is slow in learning and mostly talks about food. While the Guru and the disciple are indulging in the game of chasing one another, they come across Basantsena, a courtesan, and her female attendant who are in a picturesque forest. Though the courtesan is enjoying herself, watching the beauty of nature, inhales the fragrance of colorful flowers. A love-lorn, she is deeply in love with a rich alcoholic young man and she is mad to have his accompany in such a romantic atmosphere and sends her attendant to bring him. 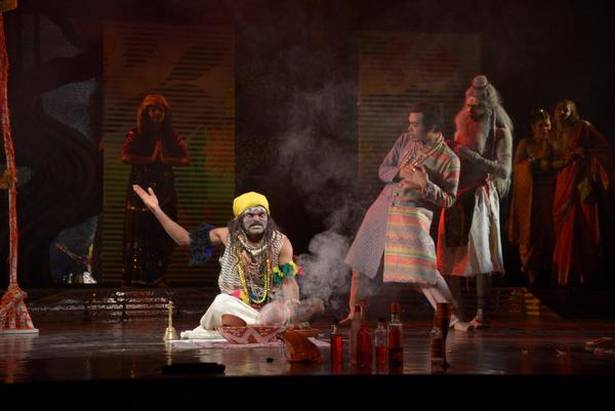 The narrative takes an interesting turn with the entry of Yamdoot, the messenger of Yama, who is assigned the duty of taking the soul of Basantsena and finds her in an amorous mood, deeply yearning for her lover. He promptly takes her soul, running fast to Yamlok to handover it to Yama.

In his haste, he has committed a blunder. In fact, he is commanded to take the soul of a different Basantsena. Shandilya laments over the death of Basantsena, making an earnest appeal to his Guru to bring her back to life. The Guru consoles his disciple, that the soul leaves the body when its mission is over. Body is ephemeral, soul immortal. But the disciple is not convinced, insists to give life to the courtesan. With his spiritual prowess, Guru’s soul enters the body of the courtesan and Guru’s body drops dead. Lo and behold, life returns to Basantsena. Yamdoot is puzzled. He is ordered to undone what blunder he has committed.

After reaching the scene, he discovers that Basantsena has already regained her life but the body of Buddhist monk remains lifeless. He transfers Basantsena’s soul into the dead body of the monk. Basantsena acts and talks like a Buddhist monk and the monk behaves in an erotic manner the way Basantsena behaved as a courtesan. The situations are hilariously funny. There is another character of a Tantrik, a fake doctor, brought to bring Basantsena to life. Displaying his quackery replete with absurdity and crudity, he throws tantrums ostensibly to control the evil power that has possessed the soul of Basantsena. Exposed, he makes a hasty retreat from the scene, making himself a butt of ridicule.

But the artistic objective of director Suresh Anagalli is not merely to entertain the audience. His dazzling visual is a metaphor to reflect the dichotomy between reality and illusion to probe the concept of the transfiguration of the soul. The set and the use of properties make the production unique in itself. Upstage a two-tier structure is erected. On the top musicians occupy space to be visible to the audience. The space between the upper level and lower space is covered by a transparent element which reflects the action on the downstage. The colorful and vibrant costumes designed by Sweety Ruhel have a contemporary ring. The scene where Yamdoot transforms himself as a deadly cobra to bite Basantsena is presented as a larger than life image.

Puneet Kumar Mishra as Parivrajaka in his weird costumes and Bhuneshwar Mahilane as an eternally hungry disciple, who is infatuated by the courtesan, are eminently comic. Smriti’s Basantsena imparts to her character of Basantsena an aura of eroticism. Meshram Saurabh Gurudas as Tantrik, who boasts of huge mystic power makes himself a butt of a joke when he confronts a powerful force and Masood Qadir as Yamdoot, give riveting performances.

This article was originally published in The Hindu on November 23, 2018, and has reposted with permission.