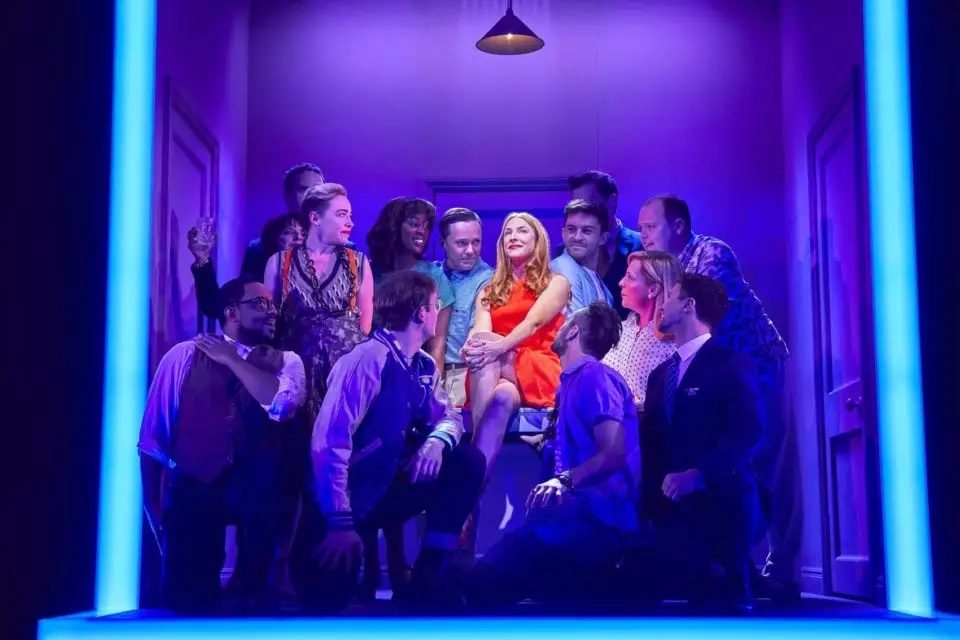 This is a game-changer. “Radical update” is a phrase that is all too often bandied about in theatre but in the case of Marianne Elliott’s take on Stephen Sondheim’s musical it is the right one. You can’t really imagine it ever being staged any other way again.

The 1970 original was a mold-breaker itself, dramatizing the recent sexual revolution through the character of Bobby, a 35-year-old New York bachelor with three gals on the go and deep-rooted commitment issues, despite the fussy best efforts of his married friends to get him to settle.

Now in 2018, we have Bridget, I mean Bobbie, a smart, attractive woman (played by Rosalie Craig) with a neat apartment, a scarlet wardrobe and an enviable social life. Then comes her 35th birthday, which leads her to ponder–with a lot of heavy-handed help from her friends–where her life is headed, romantically and, naturally, reproductively. Tick Tock.

Elliott’s production is fabulous–gorgeously sung, zippily performed, and really, properly funny. I can’t remember ever laughing more at a musical, in fact.

The cast is packed with gifted clowns, from Mel Giedroyc’s snippily pass-agg Sarah to Patti LuPone’s vodka-soused Joanne. The high point of delirium comes in Getting Married Today, in which Jamie (another gender-swapped role) gets freezing feet before marrying Paul. Jonathan Bailey’s mile-a-minute, sweat-drenched, anxiety dream of a rendition–repeatedly interrupted by a pop-up trilling priest–is a hoot.

It’s not an entirely seamless update. The set–a series of neon-framed interlocking cubes–is a bit busy. And while Bobbie’s psychodrama is given a nice dreamlike feel–her birthday party is all dry ice and freeze frames; her “35” balloon grows almost as big as her flat at one point–the intermittent Alice In Wonderland stylings feel like an unnecessary embellishment.

For the most part, it works like, well, a dream. The idea that 35 is alarm-bells-time feels a bit out-of-step, as do the pals who are obsessed with the importance of marriage or the need for a husband. Some things haven’t changed, though: the fact that everyone has an opinion on singledom, especially those who are long past it, their pious concern masking vicarious envy.

There are moments when the swap really crackles to life, such as when Bobbie’s male suitors perform a hilarious barbershop trio of disappointment on You Could Drive A Person Crazy, or when Bobbie seduces her dumb airline steward beau (Richard Fleeshman). Tick Tock, meanwhile, plays out like a nightmarish ballet around Bobbie’s post-coital bed as future selves–stomping girlfriend, pregnant wife, harassed mother–whirl all around.

Craig is a terrific actor, vocally flawless and funny, too–her little grunt of despair as the scene flashes back to her birthday party at the end is perfectly pitched. She feels every word of the songs even if you never quite get under her skin.

And then there’s Patti LuPone. Her number comes almost two hours in but, boy, is it worth the wait. Ladies Who Lunch–performed as a sozzled, self-aware roar complete with flailing stilettoes and permanent snarl–literally stopped the show as the audience obeyed her demand to rise, rise, rise. The fifth star is for her. Pure musical theatre pleasure.

This article first appeared in iNews on October 18, 2018, and has been reposted with permission.