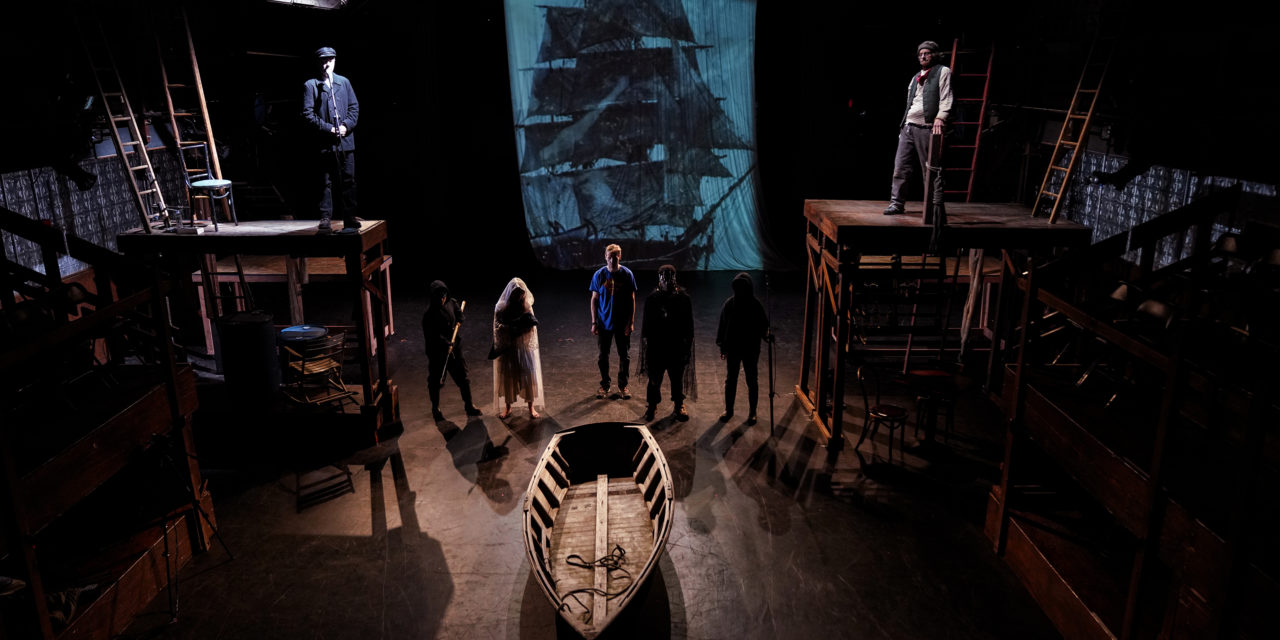 Michael Gorman’s latest play Chasing The New White Whale, at La MaMa where he is the Playwright in Residence, sets itself an ambitious task: to tackle the contemporary opioid epidemic through the master text of Herman Melville’s Moby-Dick. In some ways, this pairing makes a lot of sense. There’s the themes of despair and danger, and compulsion on a humongous scale. A probably unintended similarity is that both Moby-Dick and the opioid epidemic are often referenced, little understood.

Chasing The New White Whale concerns a modern-day New England fishing town (part of the update is replacing whale with halibut) threatened by the temptation of heroin. The hero is Robbie Foerster (Alan Barnes Netherton), an enterprising fisherman and the son of a notorious alcoholic. Some of Robbie’s ideas, including the thrill of fishing and the pithiness of Mark Wahlberg in A Perfect Storm are echoed by Steven (Khari Constantine), who is idealistic, romantic and certain he can learn more from the sea and the library than he could in college. The rest of the cast is split between quotidian characters (girlfriends, the local drug dealer) and ethereal ones (a ghostly Dolorosa, a silent chorus of phantoms, and a narrating Chaplain, performed by the playwright.) Mark Daly as the drug dealer who, like a siren, lures fishermen into his service, delivers the most vibrant performance: wild, harsh, and intense. With a set reminiscent of a shipwreck and characters alternating between Melville’s nineteenth-century diction and contemporary speech, the effect is moody and haunting, like an ominous sky over a coastal town.

Unfortunately, the play doesn’t quite come together, a result of two conflicting impulses. On the one hand are the very effective metaphorical devices–a fishing boat rising higher every time it’s wheeled out on stage, references to Melville’s text that are Easter eggs for fans of the novel. I was particularly moved by the recurring motif of babies and birth, which recalled Queequeg’s rescue of Tashtego from out of a whale’s blowhole. On the other hand is Gorman’s drive to explain the metaphor. This is a liability for the Chaplain, a figure already problematically amphibious. In his climactic final speech, he declaims:

We need a new tool with which to harpoon addiction. Like Lewis Temple—the New Bedford blacksmith, freed slave and abolitionist who revolutionized the whaling industry through the invention of the toggle harpoon in 1848—I too, have yearned to create an innovative approach with which to change the perception of addicts in our community and revolutionize Recovery.

Of course, I agree that we need a new approach, or multiple approaches, to dealing with addiction. Who wouldn’t? Maybe this is one of those “enterprises in which a careful disorderliness is the true method,” a line from Moby-Dick quoted throughout the play. And maybe the play comes across as more inventive when Gorman’s production company The Forty Hour Club takes it to non-traditional working waterfront venues, turning it into a work of immersive theater, as opposed to the famously experimental La MaMa, where audiences expect this level of iconoclasm.

That being said, on a more fundamental level, the metaphor simply doesn’t work. Just before the lines quoted above, the Chaplain says, “As Lewis Temple understood, the killing of a whale is no easy thing, just as confronting addiction can seem like an insurmountable task and requires all hands on deck.” But one cannot be so easily pegged on to the other. There is nothing sympathetic or necessary about the killing of a whale, a fact that Steven’s girlfriend Michelle (the graceful and self-possessed Victoria A. Villier) suggests when he waxes nostalgic about ambergris. One function of metaphor is to reveal the equivalence between two unlike entities. Audiences probably have a better sense of how complicated addiction is than how difficult whale-hunting is, and anyway, we only support one of those two. I don’t mean to chastise Gorman for being politically incorrect, but other metaphors spring more readily to my mind: ecological destruction, machismo, loneliness. 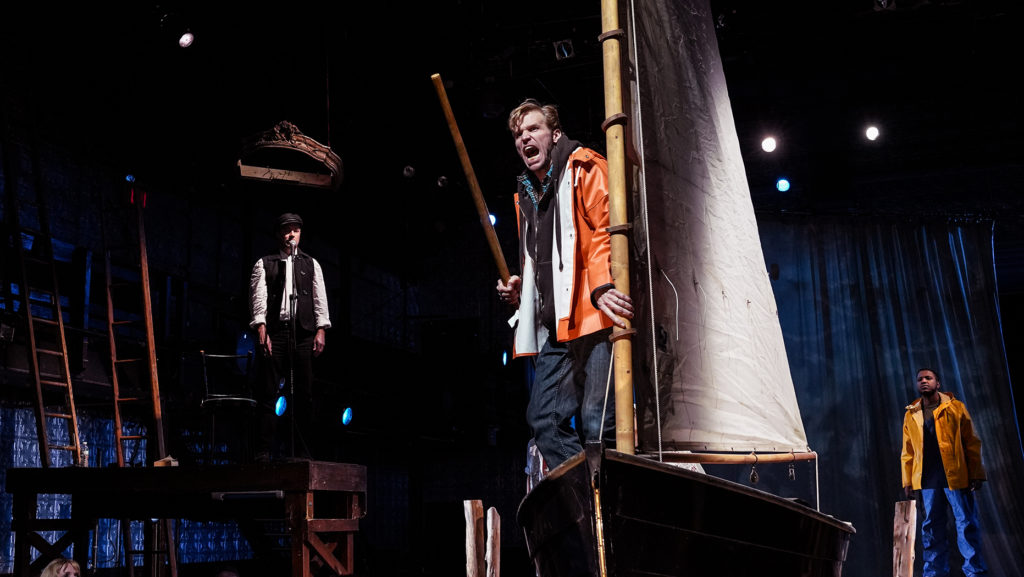 Earlier in the play, the narrator asks,

How do you confront a disease as insidious and destructive as addiction? How do you kill a whale as malevolent and murderous as Moby-Dick? … After all, what was Ahab, but an addict, really, and what was the white whale, but an allusion to opium, and heroin, it’s contemporary scourge?

But it’s Ahab’s delusion that turns Moby-Dick, a dumb beast, into a “malevolent and murderous” being. Reducing the whale to nothing more than a symbol for opium robs Melville of the ambiguity and vitality that makes the book such a thrilling read. Moby-Dick, like Alice In Wonderland, is more than the sum of its narcotic influences.

Gorman should have thought through all the implications of these metaphors because the pairing is promising. But where Melville was careful and sparing, Gorman and director Arthur Adair are slapdash. Again, maybe that’s a “careful disorderliness,” but I was left wanting more intentionality. I wanted to see these characters accounted for, so that Robbie wasn’t the only one with a backstory, psychology, and motivation.

A more thoughtful presentation of race would have been especially welcome. The crew of the Pequod is famously multi-national and multi-ethnic, which is hinted at by the figure of Fedallah (Trey Adams), a haunting figure dressed in a coat of mail. All the other actors are white except, strikingly, Khari Constantine as Steven and Victoria A. Villier as his girlfriend Michelle. (Robbie has a white girlfriend, Therese, played by Meridith Nicholaev). If Steven and Michelle are written as Black characters, it doesn’t come through in the dialogue. At points, the script seems in conflict with the actors’ race, especially in an exchange where Michelle, an aspiring artist, wonders if she has enough of a “dark side” to achieve greatness:

The beginning of this exchange doesn’t necessarily lead us to think about race, and it’s injurious to both actors’ craft to deny them access to the symbolism of light and darkness. But the discussion of percentages inescapably evokes early American notions of racial categories. A 1787 congressional decision held that slaves were considered 3/5 of a person for the purposes of determining population; concurrently and later, rights were conferred based on what percentage of African ancestry a Black person was thought to have, hence categories like “octoroon” (1/8) and “hexadecaroon” (1/16). This is certainly the vocabulary Melville would have known, so the insensitivity here is not just political, it’s historical. Regrettably, the failure to address race head-on in a play with a multi-racial cast reproduces media rhetoric surrounding the opioid epidemic, which has been largely whitewashed. Whereas the crack epidemic of the 1980s was associated with Black communities, leading the government to declare a “War on Drugs,” the opioid epidemic is already met with more sympathy as the media overwhelmingly depicts addiction in white communities.

What the play does very well is linking opioid use to professional disappointment. Americans who are personally shielded from it tend to associate opioid use with rural and post-industrial communities, emphasis on the post. The use of heroin in New England and the costs of addiction on the already struggling fishing industry are issues obscured from many people’s sight. Gorman does well to point to the lack of opportunities and the wealth gap as contributing factors. Will this play revolutionize addiction treatment and the way communities regard their most vulnerable members? I’m not so sure. Call me skeptical. 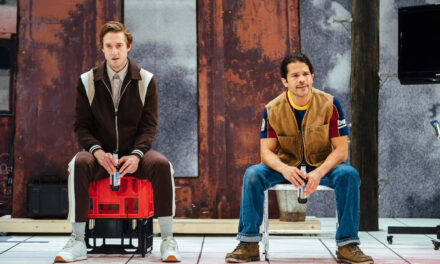