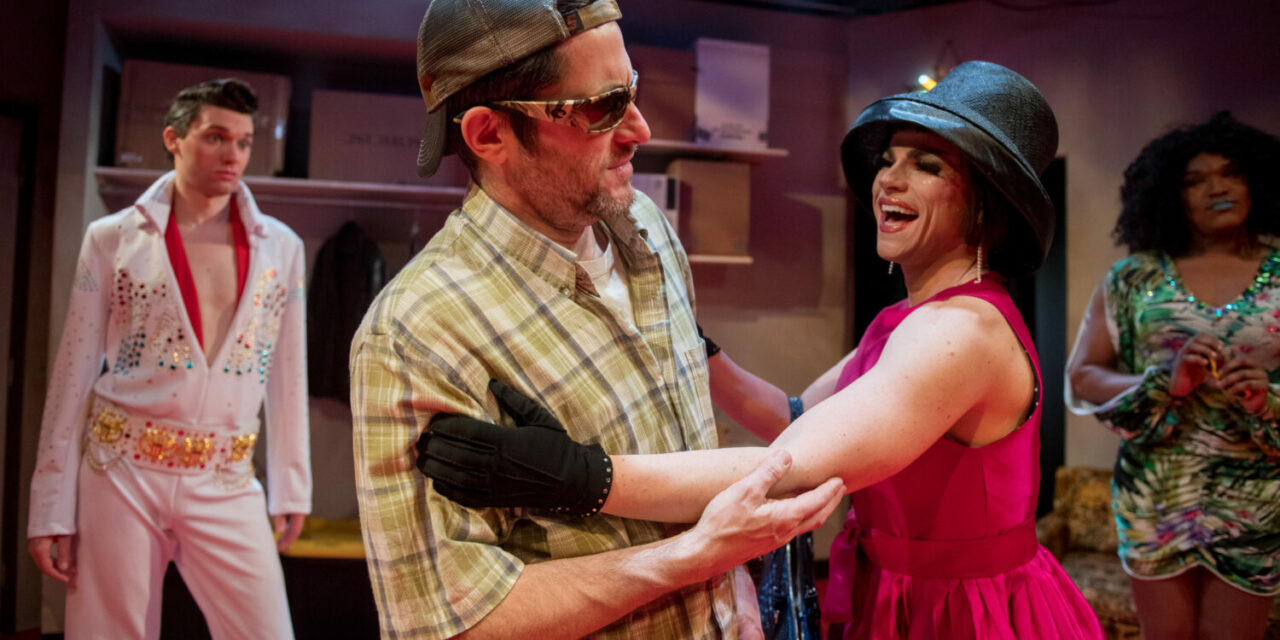 Unless you are somehow immune to the infectious pleasures of a good drag show, I’m willing to guarantee you’ll be smitten with the Barebones’ production of The Legend Of Georgie McBride, an exuberantly fun and caustically funny celebration of drag queenery by playwright Matthew Lopez.

The play tells the story of Casey (Andrew Swackhamer), a not-very-successful Elvis impersonator at a verging-on-bankruptcy Florida panhandle bar owned by the gruff and practical Eddie (David Conrad, disarmingly charming in the role). When Eddie’s cousin Miss Tracy Mills (the magnificent Shua Potter) rolls into town with her friend Rexy (Justin Lonesome), Eddie demotes Casey to a bartender and gives Miss Tracy and Rexie the stage, in hopes that their drag queen act will bring in customers. But then Rexie drinks herself into a stupor just before her big Edith Piaf-on-rollerskates number (don’t ask), and–the show must go on!–Miss Tracy and Eddie convince Casey to exchange his sequined jumpsuit for a wig and dress and fake it till he makes it.  “Just mouth ‘watermelon, motherfucker,’ it’ll look like you’re singing the words,” Tracy coaches, as she pushes the newly christened “Georgia McBride” on to the stage.

A star of sorts is born out of this hasty moment of improvisation. In a quick and zany montage sequence, we watch Casey blossom from a gawky, awkward, hetero man-in-stilettos into a confident, sassy drag queen, and soon he’s bringing wads of cash home to his financially anxious and newly pregnant wife, Jo (Sara Williams). But even though no one in the world of this play seems to harbor much animus against drag queens or other gender-non-comforming folks, Casey nonetheless feels shame about his new job and lies to Jo, telling her that he’s earning the money from bar tips. You’ve seen this rom-com plot before, and it winds up exactly where you expect, with Jo eventually surprising Casey at work and catching him with his not-so-proverbial panties on, and Casey needing learn to fly his freak flag with pride in order to win back her love and trust (and find his true calling).

The play bounces back and forth between the bar, where Potter’s Miss Tracy sets a tone of high camp, and Casey and Jo’s apartment, where it feels like we’re watching one of the sappier episodes of Friends. Director Patrick Jordan has the right instinct to establish a tonal distinction between Casey’s “real life” at home and the fantasy he gets to enact on stage–after all, one of the themes of the play is that the world of drag is a world unto itself, one that Casey only slowly comes to fully embrace–but the domestic scenes feel deflated and grayscale in contrast to the technicolor zing of the drag segments. Given how derivative of any number of rom-com/sit-com scenarios Lopez’s limp plot is, those scenes might have been better served by putting some air quotes around them as well.

Nonetheless, despite the sentimental plot, the production is overall a whopping delight. When the “girls” are in view–either backstage, prepping for the next act and bantering, or onstage, lip-syncing to a cornucopia of musical numbers, from country music to torch songs to showtunes (there’s a great gag involving a tune from the Sound Of Music)–the show is boisterous and electrifying. Swackhamer’s transformation is downright magical, and Lonesome brings a larger-than-life spikiness to Rexy, a queen who schools Casey that drag is not for sissies. But it’s Shua Potter–a professional drag artist who performs regularly at Arcade Comedy as Schwa de Vivre–who supercharges the play, bringing massive charisma and an exquisite comic sensibility to both the offstage Miss Tracy Mills and Tracy’s many onstage impersonations (one of which is a dead-on, eye-popping Liza Minelli).

Of course, these girls would be nothing without costumes, and they are dressed to the nines, tens, and elevens in costume designer Angela M. Vesco’s inventive–and suitably a little scruffy and “budget-conscious”–wigs and costumes, many of which are punchlines in and of themselves. (She may also have exhausted the supply of sequins and glitter in the city of Pittsburgh). They are fabulously illuminated, too, by Andrew Ostrowski’s lighting design, which not only glams up their drag numbers but also gradually transforms Eddie’s seedy bar into a “club” as their act becomes more successful. And last but by no means least, the choreography, by LaTrea Derome, is playfully ludicrous in all the right ways, inviting the audience to whoop with laughter as the queens invent and reinvent themselves from number to number. And laugh we do.

This article was originally posted in The Pittsburgh Tatler on February 18, 2019, and has been reposted with permission.