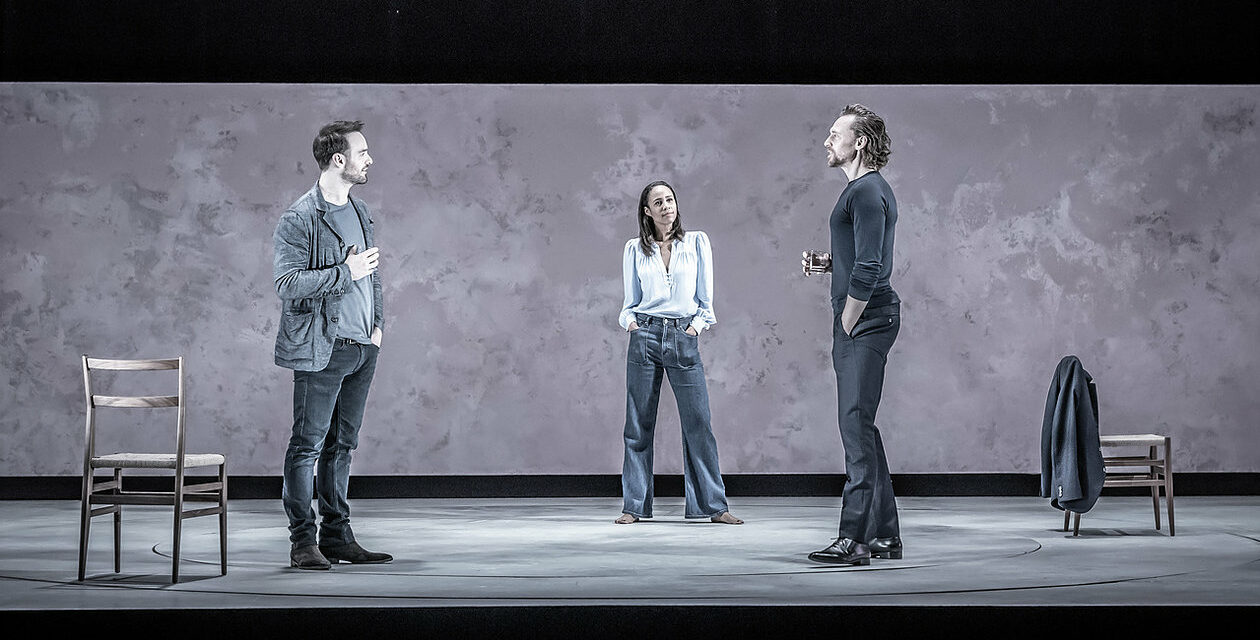 Betrayal is unique in the Pinter canon. Now beginning its fourth run on Broadway, it’s proving to be the sole durably popular play by this highbrow literary star (a Nobel-winner) who rather enjoyed being an irritant to casual entertainment-seekers and, in his later life, a political provocateur. Betrayal is about sex, infidelity, and dishonesty, subjects most everyone can relate to, and its famous backward narrative technique makes puzzling out its plot a lot of fun. Fun, however, isn’t the first word Pinter usually brings to mind.

Pinter aficionados have argued for years that this play’s critical dismissal as a lightweight anomaly at its 1978 premiere was unfair. The first reviewers were supposedly blinded by the play’s accessibility and didn’t see that it was just as complex, incisive and ruthless about self-deception, alienation, and sublimated malice as any other Pinter work. Maybe so.

Thing is, I’ve now seen all four Broadway versions as well as the 1983 film, and I’m still not sure those first reviewers were entirely wrong. All these productions had their appeal. Each brought out fresh nuances and potentialities in a text that hugely depends (like all Pinter) on interpretation of pauses. The latest version—a British import directed by Jamie Lloyd and starring Tom Hiddleston, Zawe Ashton, and Charlie Cox—is certainly the best I’ve seen. It’s tight, sleek, superbly acted, and elegantly stripped of realistic trappings, with the effect of making both cast and audience concentrate hard on the chiseled language. Lloyd beautifully clarifies the essence of the play, but he can’t make it deeper than it is.

Some twenty years ago we learned that the extramarital affair in Betrayal was autobiographical. Pinter admitted that he was drawing on a seven-year clandestine relationship in the 1960s with the BBC-presenter Joan Bakewell while married to the actress Vivien Merchant, and Bakewell later wrote an article explaining that many plot details were literally accurate. Since learning this story, I’ve thought of Betrayal as a comparable career phenomenon to Samuel Beckett’s first television play, Eh Joe (1965).

Beckett, like Pinter, conducted a long-term affair while married. Like Betrayal, Eh Joe is about infidelity, dishonesty, and guilt; its action consists of a female voice vindictively haranguing an incorrigible womanizer about his past as the camera pulls steadily closer to his face. Also like Betrayal, Eh Joe is uncharacteristically realistic and explicit by its author’s standards and has been similarly dismissed by staunch admirers as tasteless and unworthy of the author. It’s interesting that these two intensely serious writers both begrudged themselves a foray into the stuff of soap opera (Beckett also dipped into it in Play) when their personal lives got messy. As it happens, Eh Joe was first produced at the BBC by Michael Bakewell, Joan’s husband.

The chief strength of Lloyd’s production is that it’s Spartan style effectively masks what’s dated in Pinter’s story and focuses attention on what’s still sharp, sad and mysterious. You almost forget, staring for 90 minutes at a set with just two plain chairs and some mottled pink and gray walls that don’t distinguish pub from bedroom from living room from hotel, that this play is one of the million that defines its leading woman primarily through her sexual relationships with men. Or that everyone’s responses to betrayal are so muted and unimaginative that the story basically wallows in the shallows of bored yuppiedom.

Emma is educated and does acquire a profession late in the story (as an art gallerist), and Zawe Ashton brings enough steely poise to the role to make that believable. What I’ve never quite believed, in this or any Betrayal I’ve seen, is that the men are actually book hounds. Robert, Emma’s husband, is supposed to be a highbrow publisher and Jerry, Robert’s best friend and Emma’s lover, a literary agent.

The stars who usually land these roles (e.g. Daniel Craig, Raul Julia, Liev Schreiber) are invariably too ripped, spiffy and hunky for anyone to buy that they spend their lives in reading chairs. The advantage of Hiddleston and Cox is that their suaverie needn’t stand the test of recognizable locations. They and Ashton are all particular people but they also come off as icons of behavior, vehicles for what feel like timeless types of self-deception.

All three main actors are onstage the entire time, with any member of the triangle who isn’t in a scene constantly hovering and brooding nearby. This is a gorgeous touch that alters the nature of intimacy and secrecy in the action by ensuring that no key character is ever out of mind, even when they’re far away. Soutra Gilmour’s set also features a slow-moving turntable that most of the time just helps set the grinding mood and accentuates slow discoveries, but late in the show is also used to create “coincidences” where a player suddenly finds him- or herself face to face with the very person he or she is lying about. That’s a powerful and wonderfully subtle effect, an unremarked choreography of memory and spontaneous thought, and it’s the thing I expect I’ll most remember about this graceful and lucid Betrayal.

This article was originally posted at Jonathankalb.com and has been reposted with permission.