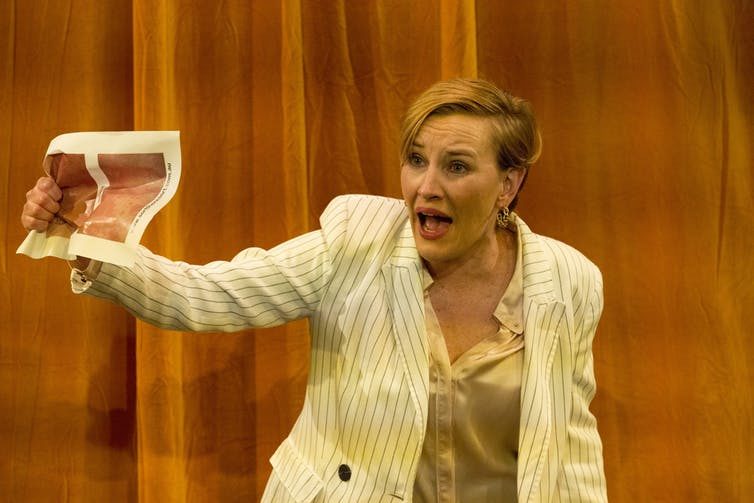 Kate Mulvany in "An Enemy Of The People." Brett Boardman

The fitness of Henrik Ibsen’s plays to address the political questions of our modern lives renews itself with each generation. So, Arthur Miller adapted Ibsen’s 1882 play, An Enemy Of The People, in 1950, using it as a way to confront the beginnings of McCarthyism and its assaults on writers’ capacities to tell the truth.

And now, at Belvoir in Sydney, we have a new adaptation from Melissa Reeves, transplanted by director, Anne-Louise Sarks, to a small-town in Australia. We are ready to confront, via Ibsen, some of what it means to live in Scott Morrison’s Australia. This is a land where vested interests might prevent our access to the truth, and where nobody’s motives are entirely free from narcissistic self-regard.

An Enemy Of The People has a title that uncannily prefigures Donald Trump’s preferred description for mainstream journalists. As one of Ibsen’s plays that is more overtly concerned with public life, it is primed to address some important questions of our time: how possible is it to tell the truth, or even to hear the truth, if nobody is allowed to escape the prison-house of vested interests?

At the center of the play is the whistle-blower Dr. Brockmann, here played by Kate Mulvany. The doctor discovers that her town’s source of income—the healing waters of a health spa (“wellness center”)—pose a significant health risk; they have been poisoned by run-off from local industry. At first, local media and small businesses are both on her side, and plan to help rectify the problem.

But, as the politicians get hold of the issue, what seems like a straightforwardly practical and scientific problem becomes clouded by self-interest. The town turns on the doctor that they had previously seen as its champion. In this production, Leon Ford, as the town’s mayor and brother to the good doctor, successfully evinces a perfect mix of parochial narrow-mindedness and mean-spirited disregard for his sister’s campaigning. 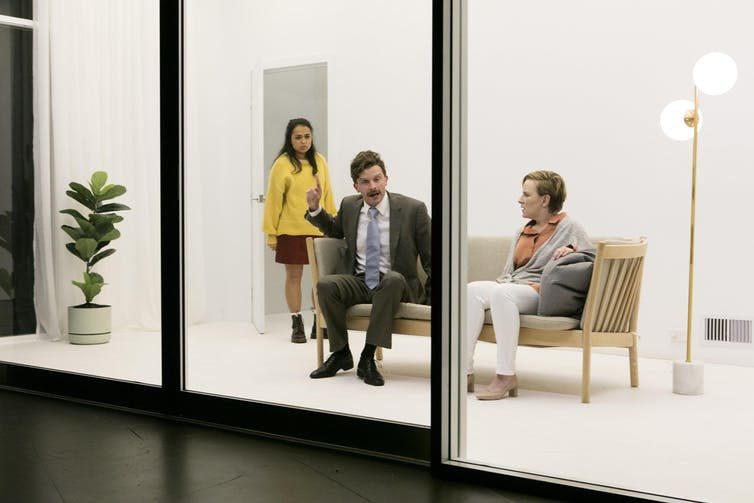 At the same time, the doctor’s crusade is harmed by a tendency to enjoy the limelight just a little too much. This is a Dr. Brockmann who, whilst passionate in her commitment to the truth, is blind to the way that her campaigning might ignore the town’s deeper conflicts.

Mulvany captures well a combination of steely resolve and an anguished vulnerability to the harsh treatment that her neighbors dole out. In amongst the damaging fight that ensues, Ibsen shows us that any path to “truth” is unlikely ever to come clearly into view.

An Enemy Of The People is something of an outlier in Ibsen’s work in that it focuses more on political associations than it does on personal relationships. The playwright’s interest in the difficulties of truth-telling is, however, something that connects almost all of his work.

He wrote this play in Danish in 1882, in between two of his masterpieces: Ghosts (1881) and The Wild Duck (1884). A contemporary review in The Times of the first English production remarks on how different the play is by way of it being much easier to understand: “the name of Ibsen…has hitherto been associated with work which is full of enigmas and obscurities,” the anonymous reviewer writes, but “here we have a play which everybody can understand.”

Incomprehension was a very common reaction to Ibsen’s plays during his lifetime. What we now take for granted as a staple of drama—a realistic representation of everyday life that hints, in its many silences, at the larger power struggles within which people become trapped—was, for late 19th-century playgoers, difficult to make sense of.

The play Ghosts, for example, had received a particularly hostile reception from some aspects of the press. The story of syphilis that it tells resulted in it being seen, according to one newspaper, as a “mass of vulgarity, egotism, coarseness, and absurdity.” 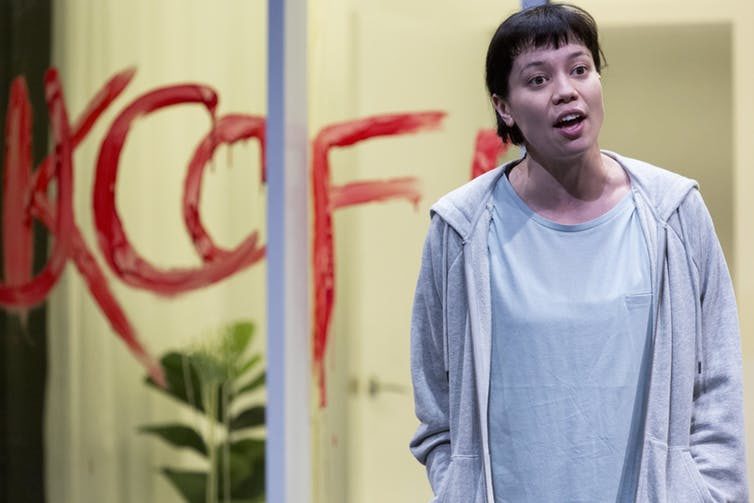 Catherine Davis in An Enemy Of The People. Brett Boardman

Others saw in Ibsen a truth-teller, somebody who was prepared to try and show life as it is really lived, not caring to insist that audiences adopt particular points of view. A contemporary supporter of Ibsen, Arthur Symons, wrote that, “Nothing shows us better than Ibsen’s social dramas the true meaning of the word realism” and that his work, “is daring to discuss matters over which society draws a veil.”

In Dr. Brockmann, we get an Ibsen-like figure: a misunderstood truth-teller, wondering if it is all still worth it when faced with seemingly impossible opposition. This might be why some of his contemporaries found this play to be a bit more digestible than his others. With his other plays, Ibsen turns inwards, into people’s minds and into their private rooms, as he traces the appalling effects of stifled opportunity. But, with this play, he goes on the attack and looks outward.

In this production, this outward-looking trajectory provides for some fresh and compelling dialogue from Reeves. Her adaptation fizzes with contemporary relevance.

The fourth act is particularly strong. This is a public meeting between the doctor and her opponents. In the original, Ibsen manages this by filling his usually sparsely-populated stage with a huge crowd of people. Contradictory viewpoints fly across the stage. He takes us out of his usual habitat, the middle-class parlor, where he might just show us “life as it is lived” without offering us any explanations.

In the Belvoir production, we are actually made part of the crowd, as Mulvany’s Brockmann draws us into the argument, challenging us on our own complicities, our own refusals really to break through the spin and listen to the “truth.”

An Enemy Of The People is being staged at Belvoir until November 4.

This article first appeared in The Conversation on October 15, 2018, and has been reposted with permission.