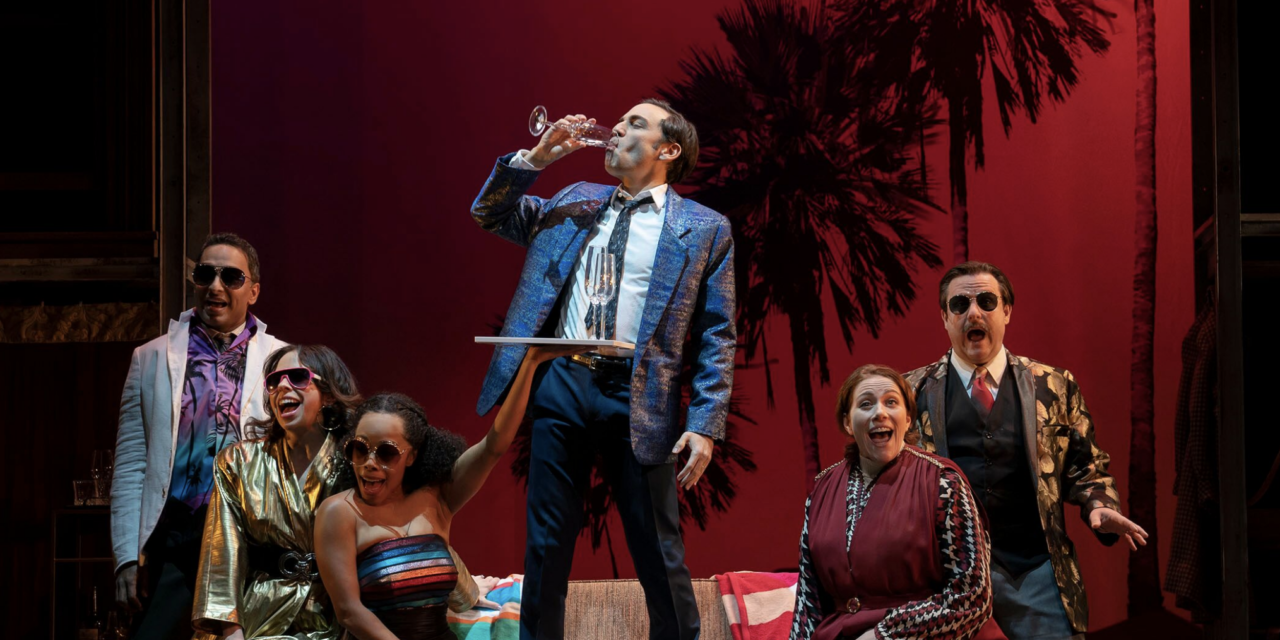 The cast of Roundabout Theatre's new production of Stephen Sondheim's "Merrily We Roll Along," now open at the Laura Pels Theatre. Courtesy of Joan Marcus.

In the eyes of a cynic, Merrily We Roll Along, Stephen Sondheim’s 1981 Broadway flop that after 52 previews and 16 performances ended the composer’s industry-changing partnership with Hal Prince, has always been a metaphor for itself. Wild ambition and missed opportunity. Stalled progress and the stubborn, untenable optimism — then resigned defeat — of a good thing going, going, gone.

In partnership with Roundabout Theatre Company, Fiasco Theater has dared to tempt fate yet again with Merrily, staging a buoyant, light-on-its-feet reimagining that’s stripped the musical of its original clutter, aiming, instead, for the story’s thematic heart. In result, Roundabout’s Merrily We Roll Along is a jubilant recreation of this once troubled musical, if only narrowly successful in its evasion of the material’s original missteps.

Merrily We Roll Along, adapted by George Furth from a George S. Kaufman and Moss Hart play of the same name, is a tale of friendship told backward. That’s the gimmick. Frank, now a Hollywood hack (Ben Steinfeld), Charley, a failed playwright (Manu Narayan) and Mary, an alcoholic critic (Jessie Austrian) — once dewy-eyed, ambitious kids — are a trio of cynical, loveless and defeated friends whose bond has shattered beyond repair. With each scene, Merrily moves backward in time, stripping away the hardened shells of jaded adulthood (enacting, at times indecipherably, the selfish decisions that put them there) until, in the final scene, the three, having recently met, look to the stars with eager anticipation, castles in the air.

At its core, Merrily is an impassioned plea for the sense of possibility that beats so steadily in young hearts. Who could dislike that?

Yet, the story of Merrily’s original production is as dramatic — and dare I say as human, chock full of just enough cautionary tales of wasted potential — to be a Sondheim musical itself. Wanting to write a show about teens, Prince and Sondheim cast a company of young, green actors to play the jaded adults at the play’s center (among them Lonny Price, Jim Walton, and Jason Alexander), the cast’s youth a self-contained metaphor. That creative impulse turned out to be a bad one, and an already cumbersome play was made ever the more confusing.

A perfect storm followed. Prince cut the costumes and had every cast member wear sweatshirts with their character names printed boldly on the front. Days before opening, Jim Walton was picked to replace James Weissenbach as Frank. During the first preview, rows of audience members walked out (something I never quite understood; were the scenes so badly constructed that the audience couldn’t hang around just to hear a brand-new Sondheim score?). The press skewered the show after opening and, sixteen days later, it closed, crushingly.

Sondheim and Prince never worked together again in earnest. But, as the musical toured the regional and international circuits, Merrily became a cult classic, giving us “Good Thing Going” and “Not a Day Goes By,” now canon. Today, most Sondheim fans might tell you it’s among their favorites, the score one of Sondheim’s best.

Roundabout’s rejigging is the largest New York effort given to Merrily since its debut, and so, whether Fiasco likes it or not, this is the reputation that necessarily precedes their production.

And an effort they have made. This is a fun, inviting and genuinely jubilant turn that is well worth seeing — a true joy, really, to witness such energy and enthusiasm renewed in a musical that has lived on by the virtue of its score (recorded a day after the musical closed), its life confined largely to our own record shelves.

In a sense, Fiasco Theater was destined to rework Merrily. In 2015, the company mounted an acclaimed adaptation of Into The Woods at Roundabout that too took a bare-bones, improvisational swing at a Sondheim musical that was suffering not from burial, but overexposure — a commiserate challenge, for sure.

But, in a near case of art imitating life, Fiasco’s founding members, Jessie Austrian, Manu Narayan and Ben Steinfeld have seen in Merrily their own story. While we hope they’re not nearly as jaded today as the play’s protagonists, the three real-life collaborators were once, like Frank, Mary and Charley, starry-eyed artists, making theatre in a downtown walk-up. Together portraying the trio, they’ve hoped their own ten-year-long relationship might ground Merrily, its script leaving much exposition to be desired, in a bit of truth.

They’ve also worked to significantly pare down the original production design and book. In true Fiasco fashion, what was once an unwieldy cast of 27 is an industrious, untiring ensemble of six, Brittany Bradford, Paul L. Coffey and Emily Young portraying what roles remain. With Sondheim’s own help and permission, Fiasco has contained a few of Sondheim’s lumbering numbers and steered Furth’s script to a simpler version more akin to Kaufman and Hart’s original play — Merrily now energetic and laser-focused on that theme of friendship.

The great thing is that it really comes through; no one can deny the chemistry Austrian, Narayan and Steinfeld share on stage. It’s the kind of thing no actor can recreate — and perhaps that’s what this musical, itself suffering from exhaustive artistic dallying, needed to succeed.

And while I was not blown away by any one singing performance (a small tragedy, really), I find it forgivable. Despite the posh illusion of Roundabout’s Laura Pels Theatre, Fiasco is after all — and as their semi-autobiographical selection of this work reminds us — an ensemble of rag-tag innovators, however polished the production. If that means I must sit through a “Not a Day Goes By” (performed by Brittany Bradford) that feels more acted than sung, perhaps a bit forced, then so be it. I always have Bernadette.

Most of the clutter, it seems, has been put in the walls, Derek McLane’s scenic design a thing of thematic and visual beauty. The shelves upon shelves of stuff — old lamps and coffee tables, radios and empty liquor bottles, faded suitcases and broken television — that line the stage feel as though the entire play has been lowered into a time capsule of the clutter accumulated over years of friendship. It’s both a perfect space for the ensemble to play in — changing costumes in the wings and grabbing props from the walls — and to contemplate the themes they’ve tried so hard to foreground.

Yet — I must add — Merrily is still a fundamentally broken musical. The impulse to strip down Prince’s original design, condense its untidy cast into a group of animated players and focus Furth’s vacuous script toward its source material is a sharp one. But what gave Stephen Sondheim and Harold Prince their place in the musical theatre pantheon was a certain dedication to scale, to grandeur and theatrical opulence, a particular and unmistakable seduction. Achieve the former, as appropriate as it may be for Merrily, and you’ll lose the latter, what cradles Merrily’s audience with the distinct feeling of watching (and listening, of course) to Stephen Sondheim.

As a result, this production feels more like a play with selections by Stephen Sondheim than a fully integrated musical, the seamless interchange of libretto and dialogue so characteristic of a Sondheim property missing. And, while I am sympathetic that Fiasco may want to untether themselves from the composer’s indelible shadow, to make something defiantly new, I will not kid myself (or you) that I am coming for much more than the score.

And original and lasting criticism of Merrily is that sifting through the clutter reveals only one, continuous note. What happens when you pull on a singular string, that theme of friendship, for two hours? Not much, and Fiasco’s insistence on foregrounding this element has only accentuated this basic flaw.

I don’t mean to be too harsh toward Fiasco’s efforts (because they are mighty and admirable), and neither do I wish to be that cynic who sees in Merrily its own destruction. But, in some ways, this is an impossible project. Fix Merrily and it stops being Merrily; stay true to the design and watch it inevitably fail, lulled, even so, by the inexorable nostalgia of watching a piece of Broadway history. Which do I prefer? Between you and me and that musical theatre pantheon, perhaps the latter.