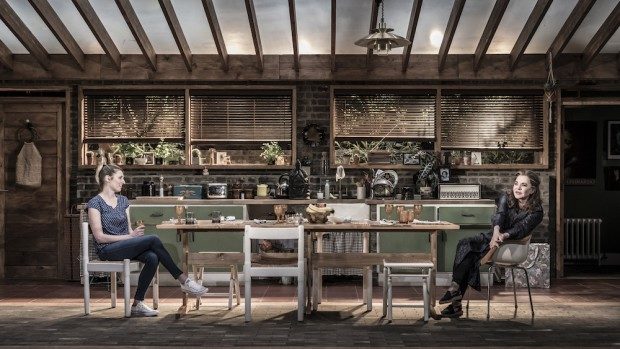 The 1960s were “hilarious,” says one young character in this revival, starring Broadway icon Stockard Channing, of Alexi Kaye Campbell’s 2009 family drama, Apologia, at the Trafalgar Studios. How so? “Oh you know, the clothes, the hair, the raging idealism.” The thought of hippies marching for political causes, smoking Gauloises on the Left Bank or storming the American Embassy in Grosvenor Square, and all the time wearing sandals and beads. Yes, to anyone under the age of 60 that must seem funny. But not, of course, for anyone who was actually there – especially if they were a radical and a feminist.

Channing plays Kristin Miller, an American 1960s student radical and feminist art historian, who plans to celebrate her birthday with her family. Her former husband is dead, so she expects to see her two sons, fortyish international banker Peter and the younger Simon, who is now a dropout suffering with depression. It’s a family reunion drama, so both sons have their lovers with them: Peter’s partner is the younger Trudi (played by Downton Abbey’s Laura Carmichael), an American Christian, and Simon’s is Claire, a successful TV-soap actress. The final guest is the much older Hugh (Desmond Barrit), a camp old friend of Kristin’s who remembers the 1960s.

As the evening progresses, amid a disastrous attempt to cook a chicken, the family’s conflicts are exposed. When her boys were seven and ten, they were taken from Kristin by their father, and they have grown up with the acute feeling that she abandoned them. While Kristin is still a passionate advocate of political change, she has paid the price in her private life. Divorced by her husband, deprived of the custody of her children, she now has to face their accumulated anger. But as they complain of her deficiencies as a mother, she fights back, exposing the selfishness of their values. Having written a memoir called Apologia, which fails to mention her sons, she is unapologetic about her life choices. And, interestingly, it’s the women, Trudi and Claire, that attract particularly withering fire from this feminist socialist.

So while it is true that the experiments of the 68ers with new forms of relationships did often cost their kids dear, surely they have not become more screwed up than the kids of any other decade? And, as this piece beautifully illustrates, the most successful of the many revolutions that began in the early 1970s was the feminist revolution. On the other hand, it is also true that what fascinates the playwright most is the idea of religious belief, so Trudi gets a lot of very best lines: at times, she is more central to the emotional action than Kristin.

As Campbell says in a note to the reissued play text, this version of the story has been rewritten to make Kirstin, who was originally a Brit, an American. This works quite well, although the laughs provoked by Trudi, the other American character, occasionally feel as if we are laughing at her nationality rather than her beliefs. Still, there’s a good joke about liberal attitudes and Trump, which definitely deserves the applause it got on press night. But some things continue to rankle. There is something a bit conservative about the sense that Kristin seems, by the end of the evening, to be weakened, a victim of her sons’ tendency to blame the mother for all their ills. You feel that she deserves a better vindication.

Nevertheless, this is a well-written, very humorous, and deeply felt drama, with one scene in which Kristin extols the revolutionary qualities of Giotto and another touching one in which she removes shards of glass from Simon’s hand while he tells a heartrending story about his abandonment as a boy. Campbell clearly understands the psychology of mutual recrimination that can blight family life, and how we have lost the spirit that made the 1960s so exciting. At the same time, he tries so hard to be fair to all his characters, and the writing can be a bit too polite. As one of the minor characters says, the English would “rather have a limb amputated than make a scene.” This has the paradoxical effect of making you long for more emotional speeches, and for a clearer plot resolution.

Directed with compassionate clarity by Jamie Lloyd on Soutra Gilmour’s hyper-naturalistic set, this is an evening dominated by Channing’s exceptional performance as the opinionated, didactic, and dictatorial Kristin. She is a small figure on stage, but a powerful one. But her adamantine strength has cracks in it. When she hears that her oldest son has been to a prayer meeting, she sinks into a chair, her mouth twisted with despair. During the evening she seems to shrink under the hammer blows of her kids, both of whom are played by Joseph Millson. Carmichael’s Trudi and Freema Agyeman’s Claire are vividly characterized, while Barrit occasionally upstages the others with his brilliant timing, delivering witty lines with appealing dryness. Apologia is full of ideas, and its perceptive understanding of both radical ideology and the human heart is an unapologetic success.

Apologia at the Trafalgar Studios until November 18. 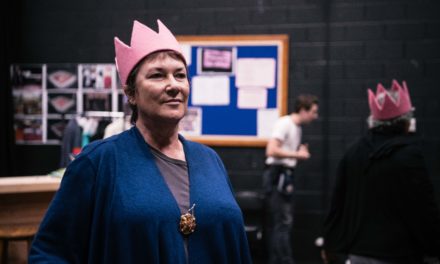