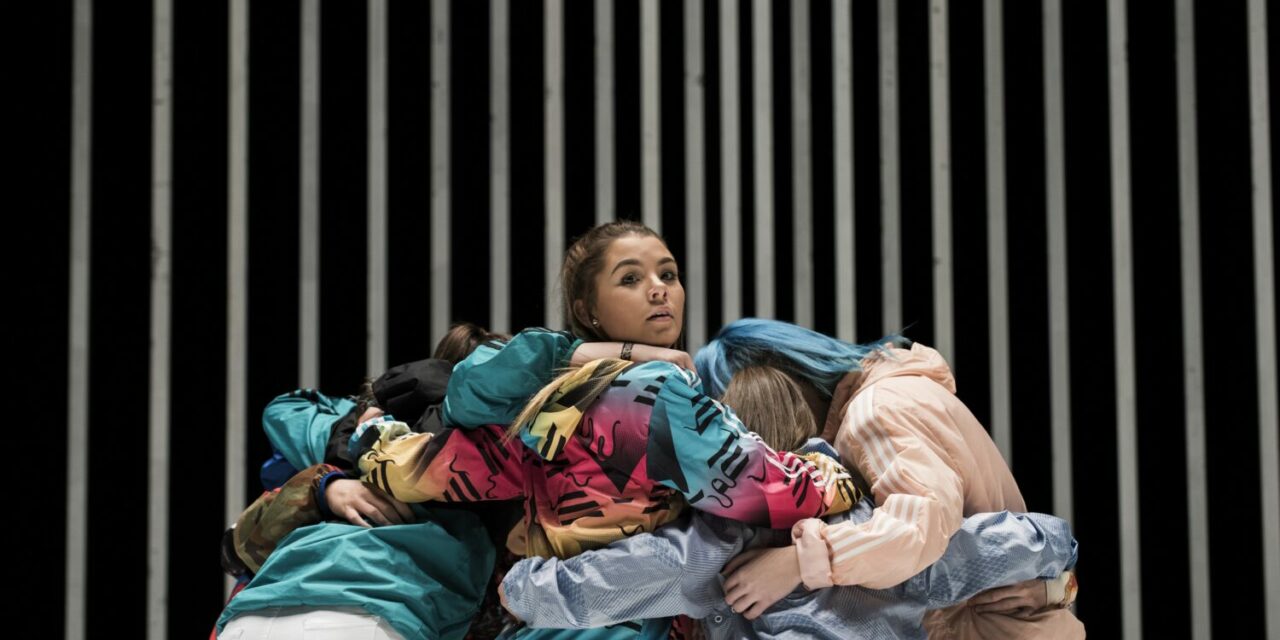 My senses are all awakened. It begins in the darkness. A curl of smoke rises from a dimly lit bowl at the front of the stage. The smell of incense hits my nose. Three dark, hooded figures stand around the urn, hands clasped in front of them. Thin, sharp shafts of light gradually appear, a light sense of menace. The vastness of tall, arhythmical bars crossing the front of the stage makes me wonder what lies behind. Three figures warming themselves in the dark.

Then suddenly, my ears come to life. A figure dressed in white thumps loudly to the floor center stage. I hear an unrelenting, persistent song of three female voices intertwined. The rhythms of the Belfast accent awaken the figure on the floor. It’s Oona Doherty, in ‘Lazarus and the Bird of Paradise’, the first of the four parts that make up her work Hard to be Soft, at London’s Dance Umbrella Festival.

Doherty moves through an astonishing set of physicalities, her face and body taking on the characters of the speakers that are heard, muffled, alongside the music, in a ‘soundscape’ by David Holmes. First, a young man, fists thrust into the front of her tracksuit bottoms. Cocksure. An older one, shouting with a twisted leer on her face. She cuts between dizzyingly fluid movements of falling backward, melting, and losing definition and structure before bouncing directly into the next character. 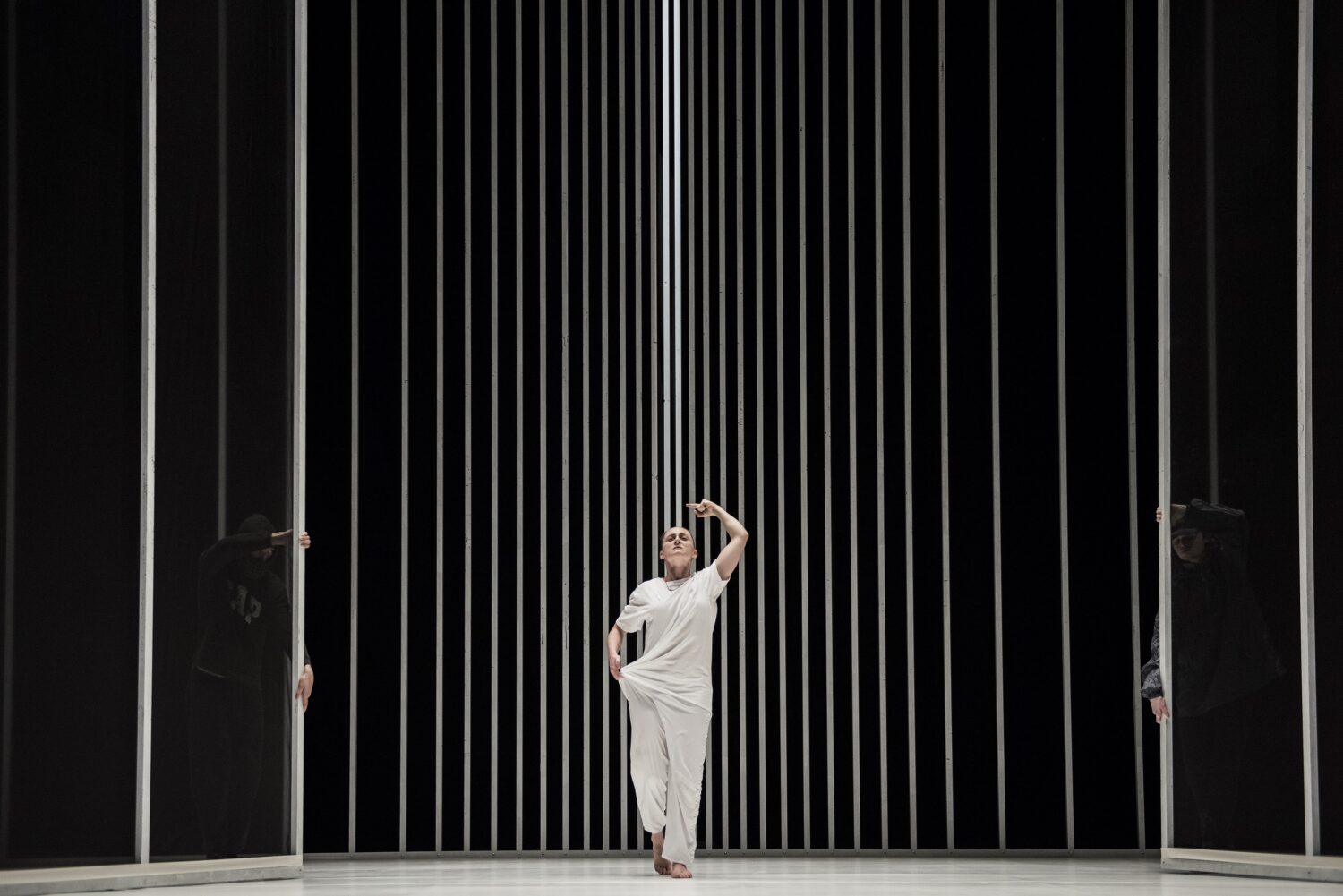 I have the sense of a dream – or possibly nightmare – where the dreamer spools through memories, stories of laughter and violence. I can’t make out much of the words these voices are saying; for my English ears, the Belfast accent is thick, and heavy with political resonance. I wonder whether Doherty has deliberately chosen for me to feel not quite in the know. A Christ-like image recurs, accompanied by a sobbing woman’s voice; Doherty on tiptoes with arms outstretched.

In the dark, again we hear a suddenly clear voiceover: a woman describing how women like to get dressed up and look ‘fabulous’ to cope with the everyday shit of life, and ‘scumbag’ men. Get made up, look amazing, and it’s empowering for women, she says. We hear the swishing sound of sweatpants material as ten young women march on the stage, for ‘The Sugar Army’.

Dressed in sporty, bright clothes, and heavily made-up, they perform an unapologetic routine ironically resonant of dance videos, looking sometimes fierce, sometimes fiercely, disingenuously happy. The odd ballet-inspired moment enhances my feeling that I am witnessing layers of simulation. Are the women empowered, or controlled by the regimental behavior of their compatriots? Occasionally, an individual will break out of the tight group routine to wander, or wonder, before being angrily sanctioned or brought into line by her companions. At the end, they break out into laughing, giggling, and showing an almost childish response, as they walk off stage and leave us wondering whether the whole thing was a joke at our expense.

The third piece, ‘Meat Kaleidoscope’, is a duet between two large, topless men. It is, for me, the least convincing part of the piece, mostly because I am consistently distracted by a projection of close-up shots from the duet we are seeing, employing kaleidoscopic effects to abstract it. The two shuffle slowly, heavily, towards each other from the sides of the stage, accompanied by a backdrop of two men’s voices arguing – perhaps a father and son? Again, I can only make out a limited amount of the content of the language, although I strain to understand. On meeting each other, they hug, unexpectedly and uncomfortably; sure enough, the hug becomes a wrestling grip but a strangely tender one. The piece leaves me needing more: there is something being communicated about two men who can only interact with the language of violence, but I’m not sure what else there is to it. 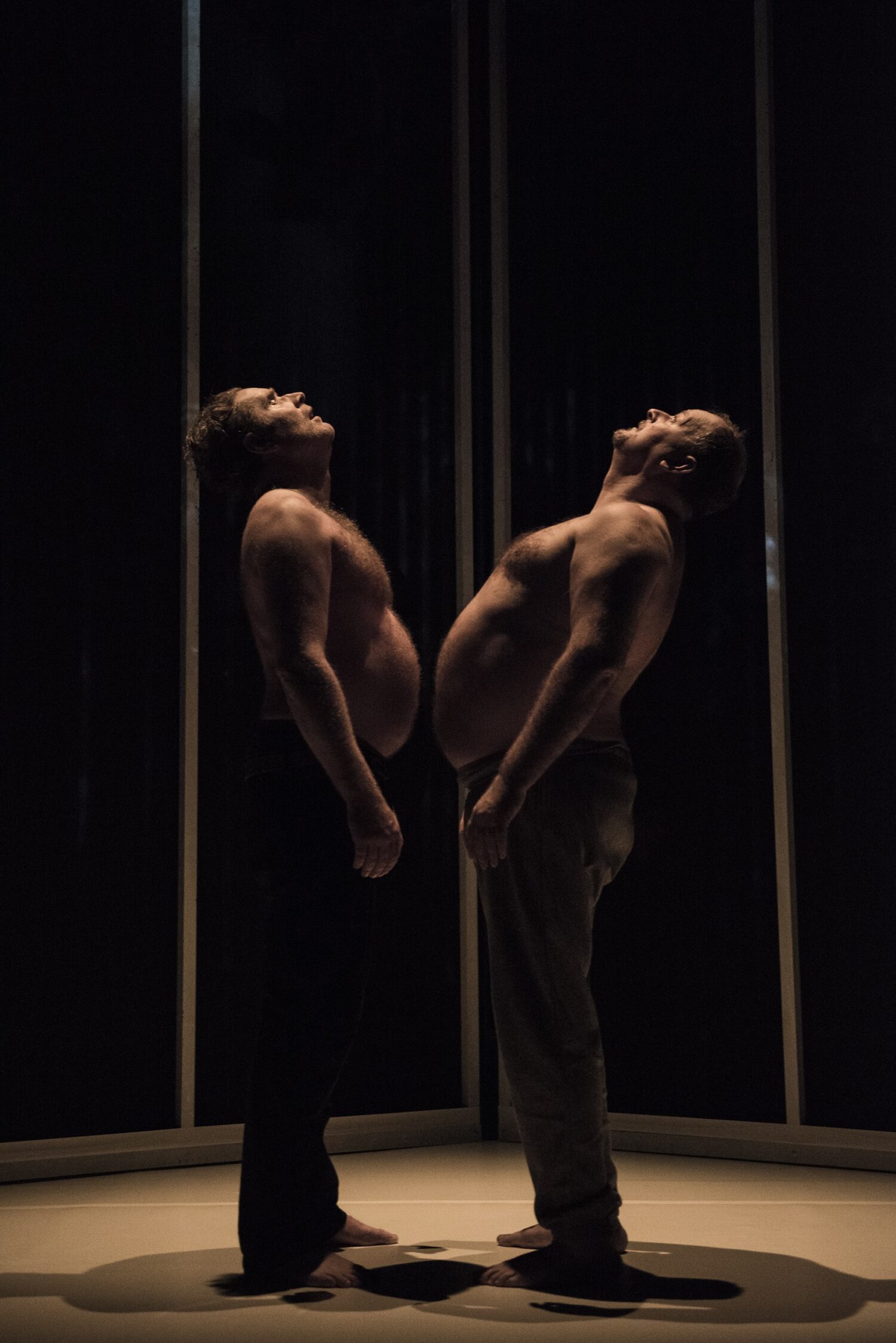 At the end of the evening, we return to Oona Doherty alone on stage with the solo ‘Helium’. My fellow audience members tangibly recoil as bright lights hit our dark-adjusted eyes. Reprising ideas from ‘Lazarus and the Bird of Paradise’, Doherty portrays a character who has certainty about their movement, a swagger, a march to the side of the space, confident about what is next – only to forget, wonder, or lose track of their line. Here, the cage-like structure of the set (by Ciaran Bagnall) contains the character, leaving me wondering what is on the outside.

Doherty brings back some of the characters from ‘Lazarus’, often employing quite gestural, mime-like movements. She evokes an infant being encouraged to walk, a child told off for something they didn’t do, a woman who’s putting up with life and smoking a cigarette, as well as men full of borrowed confidence. The work ends with a long poem played on voiceover – I wonder if it’s Doherty herself speaking – with what could be a commentary on the work itself. The voice speaks of a ‘black box’ full of emotion, of ‘man, woman, beast, song’.

The work receives rapturous applause, with the performers apparently unexpectedly delighted with the response. I find myself edgy about it. I have been irritated by the feeling that ideas are presented but not developed, especially in the two pieces that are sandwiched by Doherty’s extraordinary solos. Some creative choices, such as the gigantic, overpowering set, indicate a scale of ideas from this choreographer perhaps too big to have been quite formed into a cohesive voice. But there is a voice, coming through loud and clear. I would happily watch Doherty’s own performance for longer, with her blend of silky fluidity that threatens at any turn to jolt into a punched-out, unapologetic statement. Is this the softness and hardness of the title?

Miranda Laurence is an independent dance dramaturg with over ten years’ experience working in the dance and arts development sectors. As a dramaturg, she works with artists in the UK and internationally. She is in demand as a guest speaker and workshop leader, recently for the Danish Dramaturgs’ Association, and the MA in Dance Producing at London Studios Centre. She has received funding from Arts Council England and other organizations for ongoing professional development in dance dramaturgy and is currently an Advisory Board member of the Dramaturgs’ Network. Alongside her freelance practice, she is employed in an arts strategy development role at the University of Reading. 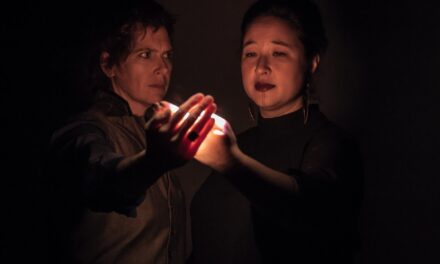