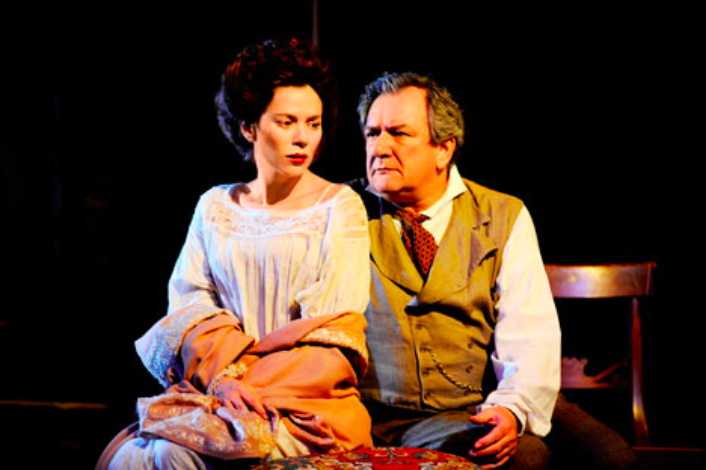 A traditional version of Anton Chekhov’s play gets West End glamor and charm but lacks conviction.

There is no obvious reason why Lindsay Posner’s production of Uncle Vanya at London’s Vaudeville theatre is not a triumphant success. The set is wonderful: It moves through the rooms of a rambling wooden dacha, with carved eaves and window frames, to reveal samovars, oil lamps, old-fashioned dressers, and a cluttered desk waiting for Vanya and his niece Sonya.

The actors are excellent, as well — especially Ken Stott, playing a funny and likable Vanya, whose charm and humanity make his wasted life more poignant.

Stott’s appearance, more rustic cameo than romantic lead, contrasts perfectly with Anna Friel’s beautifully elegant Yelena; he knows he has no hope, but his dignity is still gnawed by useless desire as he clutches his “sad, lovely autumn roses” and watches her succumb to the local doctor.

To illustrate the discrepancy, Stott plays Balin, one of the dwarves, in the upcoming film of The Hobbit, while Friel will be the glamorous wife of a pornography tycoon in a 2013 movie about Paul Raymond. Similarly, Friel’s languid ennui is the ideal foil for Laura Carmichael’s awkward, up-tight Sonya.

The costumes are very pretty, in a clichéd linen-jackets-and-lace-parasols way. The tea glasses, a garden swing, and mournful guitar help set the scene for this late-19th-century tragicomedy and its moments of emotional intensity.

Doctor Astrov, warding off age with drink, downs his vodkas in authentic Russian style. Gout-ridden Professor Serebryakov (whose return to the country estate with his much-younger wife Yelena is the catalyst for the famously inactive plot) cries out against old age: “it’s so vile and repulsive.”

The professor and his wife eventually move back to the city, leaving wretched, empty drudgery behind. Each of the remaining characters repeats, “They’ve gone,” except for Vanya, who is already numb with the realization that his life has passed him by.

Sonya’s mousey self-deprecation and nervous smiles flash into anger in her final speech, at last, where she asserts her belief that they will one day “find peace.”

Christopher Hampton’s version shifts the translation away from the usual “we shall rest,” to suggest that their travails are mental as well as physical. Stott’s blank weariness as he starts to add up the rubles spent on linseed oil and buckwheat conveys his heart-breaking resignation.

The play caused a stir on its opening night when famous theatre director Peter Hall loudly interrupted Sonya’s difficult finale from the front of the stalls.

According to witnesses, he repeated “It’s not working, it’s just not working,” and “It’s like something on television.”  Hall, who has just turned 82, has since apologized and insisted that he shouted this out after waking up disorientated from a last-act nap. 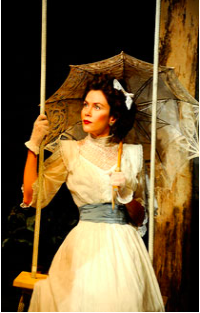 The vision of an old man embarrassing himself because he can no longer contain his frustration with what he is seeing echoes Chekhov. Hall’s outburst also has a historical precedent: Leo Tolstoy allegedly called out “Where’s the drama? It doesn’t go anywhere!” when he first saw the play.This may be an excuse, but the idea that the audience was dropping off during the misfired gunshots and tearful partings of the play’s emotional climax is not hugely reassuring either.

There is something television-like about the all-star cast and picture-perfect set. Whether Hall was heckling or having a senior moment, the comment is apt. Several outstanding Uncle Vanya performances in the last couple of years have made London audiences more demanding.

The intensity of recent versions in the intimate Arcola and Print Room theatres and the reviving qualities of other, more experimental Chekhovs have raised the bar.

Despite all that is good about them, there is a lack of conviction (and possibly even a sense of demoralization) underlying the highly competent performances at the Vaudeville.

The whole effect is somehow less than the sum of its impeccable parts. Perhaps planning, a four-month run in the glitzy West End for a play that is notoriously depressing and (as Tolstoy pointed out) un-dramatic was a bit ambitious? The theatre is far from sold out.

There is a wonderful moment in the third act when Yelena, peering through the lace curtains at the autumnal garden, says: “September already. How shall we survive the winter?” One cannot help feeling she could be referring to the actors rather than the characters, wilting like Vanya’s roses at the thought of the weeks ahead.

The nostalgic trappings of traditional British Chekovania do not in themselves weaken this production. Like most literary geniuses, Chekhov does not wither under this treatment, any more than he was destroyed by tracksuits and pop music in the Young Vic’s recent Three Sisters.

The faults are subtler than that. Among the cluttered refinement of the antique furniture and the polish of superlative acting, there is still something missing.

Vaudeville’s Uncle Vanya is just part of London’s continuing love affair with Chekhov, including a modernized Seagull in Southwark Playhouse. The Theatre Collection in a Camden pub is staging The Wood Demon (the playwright’s early version of Uncle Vanya), and audiences can look forward to yet another Three Sisters in a new version by playwright Ranjit Bolt in January.

By contrast with the stolid Vaudeville Vanya, the blink-and-you-missed-it appearance of Moscow’s Vakhtangov Russian-language Vanya at the ornate Noel Coward Theatre near Leicester Square kicked off the current mini-festival of Chekhov in bleak, compelling style during the first week of November.

A haunting musical backdrop, stylized choreographed interactions, stolen moments of passion, and an emotional range that rollercoasters between mannered and hysterical all contributed to a strange but memorable theatrical experience.

The Observer’s Susannah Clapp described the Vakhtangov version as “wilder, weirder, more extreme, far less decorative than what we normally see, and as a result more disturbing.”

Uncle Vanya at the Vaudeville Theatre on the Strand was due to run until February 2013, but will now close on January 26th.

This article first appeared on Russia Beyond on January 4, 2013 and has been reposted with permission.