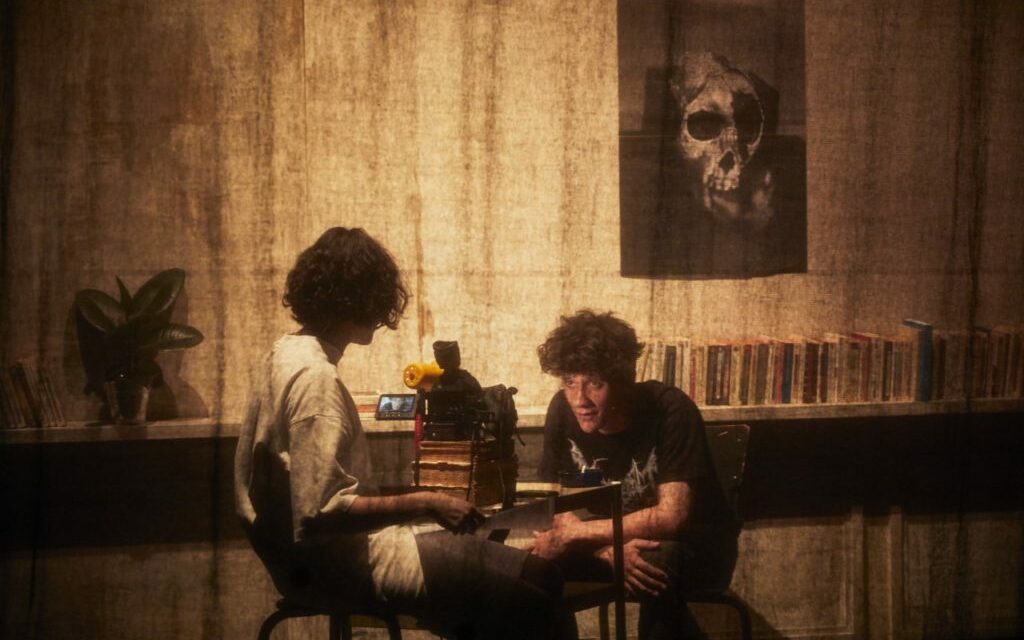 Moving along with the themes of history, memory and forgetting – the focus of Paul Ricœur’s famous philosophical book on the limits and ethical implications of understanding the past –  Avignon  2019  offers two chorus performances  — Dévotion – Dernière offrande aux dieux morts  and Nous, l’Europe, Banquet des peoples —  that propose two different responses to the question what  constitutes the collective identity of the Europe of the future.

Dévotion – Dernière offrande aux dieux morts, written and directed by Clément Bondu together with the 2019 graduation class of l’École supérieure d’art dramatique de Paris (PSPBB). This is the staging of the version of the new Europe as it is experienced and imagined by the iGen / Gen Z generation of the 20 something plus. Angry, confused, desperately seeking love and hope, this generation is fed up with the cynicism of the world, its politics, its everyday life and its arts. A product of digitalization, urbanization and overt commercialization of the everyday, the iGens also struggle with the cultural heritage of the old Europe, the heritage that seems incapable of providing them with either a cure from cynicism or a direction into the better future they are  seeking.

With no clear plot or developed characters, the production builds a theatrical environment of borrowings, references, and cultural stereotypes. An empty stage, it uses old and new theatrical technologies, live video recording, dance and direct narration to evoke the atmosphere of Parisian night clubs and the world of modern politics, full of hollow slogans and promises. Visually and thematically, it presents Europe swinging on the edge of the abyss, ready to fall into the hands of new dictators and devastating darkness. Hope is nowhere to be seen.

Theatre itself – a place of ritual, an engine for collective catharsis and a space to train imagination, the way Clément Bondu sees it – seems to have lost its power as well. Turning to Shakespeare (there are Hamlet and Ophelia on stage), Dostoevsky (Idiot character heavily resembles the killer Raskol’nikov, whereas the Prostitute looks like Raskol’nikov’s savior, Sonechka), or to Paul Verlaine, does not help at all. All these literary and theatrical references seem to be imposed, stretched and taken out of the context in the story about the generation torn between globalization and the rise of the ultra-right.

In the centre is the poet Animal-Baal, a character from Bertolt Brecht’s play Baal, the play that was also inspired by Arthur Rimbaud and François Villon’s poetry. An observer of the world, Animal-Baal is in fact a figure of evil: both the master of the revolt and the participant of the ritual of making theatre, he together with his company of actors-puppets constructs a big spectacle of life and history.

Enacted by the graduating acting class the PSPBB, Devotion is strong in its ensemble work. Although it is difficult to see what kind of particular talents and skills these young actors acquired, it is clear that collectively they are fully devoted to making theatre. It also seems that despite their generation’s frustration with the old European myths and cultural baggage, this group of young artists is ready to defend them no matter how annoyed, pessimistic and cynical they appear today.

Nous, l’Europe, Banquet des peoples is another attempt at rethinking who and what Europe is today. An example of collective research, thinking and creation, it is the show that, as its director, Roland Auzet states, “first and foremost wants to talk about what we want to be.”

Based on Laurent Gaudé’s novel of the same title, Nous, l’Europe was created by Roland Auzet with the group of eleven actors from several European countries and 60 singers. The idea was to shake the exclusive French view of the continent and to give it a more inclusive European look. At the same time, the company did not seek “to put History on trial, but rather to find in it what brings us together”.  As a result, on stage we hear French and English, Italian and German, Polish and Portuguese, sometimes translated, sometimes not; the languages of the European people to be equally used and respected if the utopia of the successful collective being is to be sustained.

However, the future, as the Avignon 2019 artists and directors repeatedly state, does not exist without the past. So, to talk about the new Europe, it is important to agree on its history. But as everyone’s personal history is specific to their individual experiences, so is the history of Europe specific to each country that makes it. Thus if for Thibault Vinçon, a French actor, today’s Europe begins in 1848 with its string of revolutions widely known as the Spring of Nations, for Emmanuel Schwartz, one of the principal actors of the Montreal scene, cast here in the role of a lead chorus figure and whose un-Europeanness was to represent a more global view on the continent, I suppose modern Europe takes its beginnings with the 1830s nationalist and separatists movements and the industrial revolution.

As the action unfolds, in other words, it becomes more and more clear that as it was difficult for the actors to agree on the beginnings of modern Europe, it is equally difficult for them to identify the milestones of its history, with one exception, perhaps, of the reign of fascism, WWII, the Cold War and the  making of the European Union in 1993. The question, however, that Laurent Gaudé and Roland Auzet want to ask is – how will Europe, with all its polarities, build its future together? And whether, in fact, today’s Europe is that diverse, with populism and nationalism rearing their heads across the continent? And with the state apparatus taking over and crumbling at the same time under the pressure of the external issues – such as migration, and internal ones – such as poverty and unemployment?

A collection of dialogues, choral recitals, songs, short monologues and brief dance sequences Nous, l’Europe turns to today’s political figures who might have answers to these questions. On July 6, 2019, when I attended this play’s opening, François Hollande (the President of France between 2012 and 2017) came up on stage to share his knowledge and view on the future of United Europe. Admitting his mistakes and citing personal regrets, such as France’s failure to create better systems of asylum-seeking and integration programs for refugees  in France and across Europe, he urged the actors and the audience for France’s stronger political partnerships with Germany, its long-standing ally, but also with other countries, if Europe wishes to succeed in resisting the rising influence of nationalism, forcing the ideas of closed borders and national security. The time is running out – he said; democracy cannot be the privilege of the one class, it must be a choice of all people.

Despite the feelings of hope the production aspires to create – and it does so, indeed, with its grand finale of actors, chorus singers and audience members dancing together to the hymn of Europe – it also leaves a sense of uncertainty. Despite its efforts in research, writing, thinking and enacting the hopeful diversity of Europe, ready to acknowledge its problematic past and present, including its colonial invasions and indifference to refugees bordering on hostility, it remains unclear who Nous, l’Europe sees as its real target audience. Is it the middle class audience of the Avignon Festival, capable of purchasing tickets for its main stage productions,  traveling to the heart of France without a visa in the comfort of their cars, planes and the TGV, or is it the people of the Parisian streets and small European towns on whose shoulders lies the true responsibility of building this new Europe?

In his opening speech of the festival’s 2019 edition, the Artistic Director Olivier Py spoke of Avignon’s tradition to act as a venue for popular theatre – not a populist or commercial theatre of pure entertainment, but a theatre for the people, called to address the most pressing political, economic and cultural issues of its time.  Obviously, Py searched in his programming for the performances to speak to this agenda, and clearly, Nous, l’Europe, banquet des peoples is one of them.

The question I would like to ask is this: are there ways to stop preaching to the converted, to take these pressing issues out on the streets, and back to the people about and for whom Py wants to speak? And thus, is it not the time to question the methodologies and the impact of making political theatre, when, as François Hollande said, we – the people of democratic beliefs and mindsets – are desperately running out of time?

This article was originally posted on http://capitalcriticscircle.com on July 7th 2019. Read the original article.