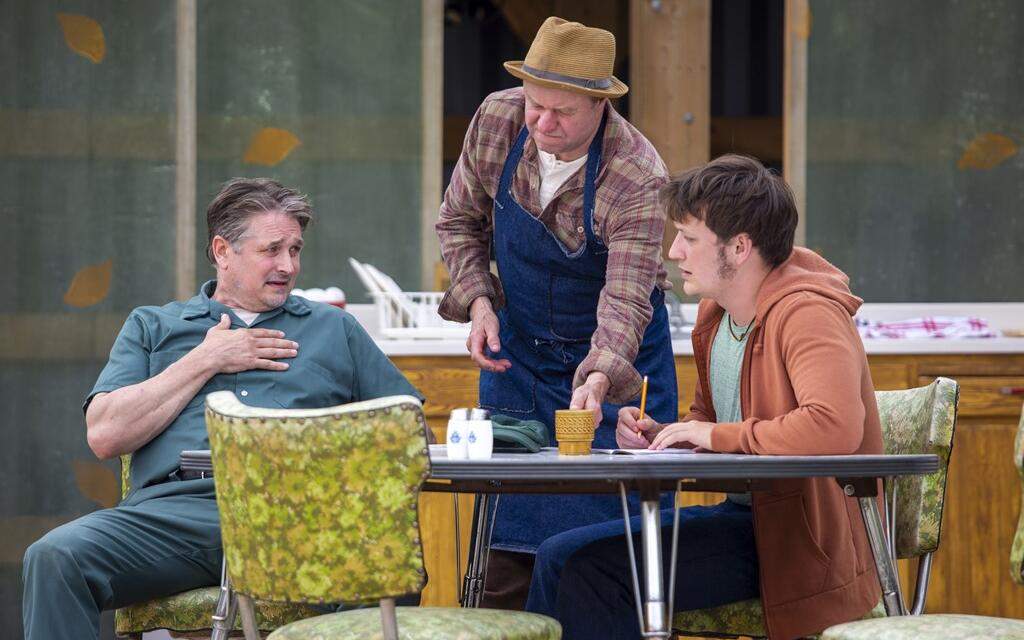 The opening play of the  Blyth Theatre Season, Michael Healey’s Canadian classic, The Drawer Boy, has once more come home.

Set in a farming community in Huron County, its starting point is the legendary The Farm Show directed by Paul Thompson, the most celebrated of a number of collectively created documentary plays in Canada in the 1970’s, which echoed decentralizing and regional impulses in theatre internationally. Yet, this pioneering work took place in Canada under particularly urgent national conditions, where most of the major theatres (and their enviable subsidies) were still shackled to colonial traditions.

The Drawer Boy is now being staged, thanks to Pandemic caution, in a newly built outdoor theatre, surrounded by farmland. The open wooden structure, with its thrust stage, invites a minimalist set, though the cleverly worked farm house interior (designed by Steve Lucas) is, by turns, transparent and opaque, like the unfolding story itself. The larger setting of the play now becomes the billowing green corn fields that surround the stage, while as the evening closes in, the clear blue sky turns, first, inky violet, and then pitch black. In the end, this shift mirrors the tonal progression of the play, which becomes darker and more inscrutable as events unfold.

Though it begins with easy laughter, rooted in the well-worn trope of city slicker meets country bumpkin, the play slides into a crisis of truth, a rural Rashomon which cuts to the quick of either simple or settled story-telling. Under Blyth Festival Artistic Director Gil Garratt’s nuanced direction, The Drawer Boy returns to what it has always been, an actor’s play (Garratt played the role of Miles in the very first production), with the two bachelor farmers being given a wide berth for, first comic, then, tragic turns. The structure of repetition, which is motivated by Angus’s memory lapses, mimics the cruel mnemonics of Trauma in which a deeper layer of the mind has forgotten nothing.

The buried truth of these farmers’ lives is painfully cracked open like a walnut when Miles, an actor from Toronto, comes through their door. It is the first of many historical gestures in the play, in which the actor, played by Cameron Laurie with compelling innocence and enthusiasm, offers to help with farm chores in order to learn first-hand about the work and lives of these farmers. It is a retelling of one of the inaugural events of Canadian theatre. On the face of it, the play re-enacts the work of Thompson’s collective creation in which a troupe of actors from Theatre Passe Muraille knocked on farm doors near Clinton, Ontario (the date of 1972, follows close on the publication of Alice Munro’s 1971 breakthrough fiction about the Ontario Gothic of Huron County) to work on farms and bring back the raw material which would make up the set stories and monologues of ordinary Canadians. The difference is that Healey’s play, with its kernel of traumatic experience, unspools to remind us that there is no such thing as ordinary, while truth, itself, is on shifting ground.

Much of the humour of the play comes at the expense of the ingenious Toronto actor, who is fed tall tales about crop rotation and the protocols of chickens laying eggs. Notebook in hand, he falls for them all, and adds a few new comic moments which send up his theatrical training. Not content to document the work and lives of the farmers, he applies his Method acting training to experience the inner emotions of Daisy the cow.

Soon enough, though, Miles hones in on the central mystery of the farmers and uncovers the origin of Angus’s damaged memory. What he takes from Morgan’s telling is the first archaeological layer of story in The Drawer Boy. He tells the young actor-dramaturge how the two childhood friends, the one a farmer, the other,  the drawer (a moniker based on his penchant for drawing plans), enlisted and went off to Europe to fight in the war. There, they met two English women, Sally and Frances, but in one life-altering fatal decision, Morgan sends his friend off into the streets for brandy for the foursome. It is the moment of the Blitz, when the bombs are raining on London, and Angus is severely injured by falling shrapnel. He survives surgery and metal plates, but it is the beginning of a lifetime of severe headaches and memory lapses. Ill- luck follows them to Canada where the two tall English girls whom they have married in a double wedding , suffer a fatal car accident. When Morgan tells Miles that they are buried high up on a nearby hill, the young actor can no longer be a passive recipient of story. He insists that Angus be told the truth.

Yet, when the two farmers see their history on stage in rehearsal, they respond in diametrically opposite ways. While Angus recognizes his history for the first time, Morgan forbids the young actor to use their story. In the end, he is forced to confess it is a lie, no more than a protective fable that shields both Angus and himself from a more troubling story of love and loss. Whereas the first version of what happened promised a redemptive reading of art and theatre, this new darker truth unmoors them completely.

Randy Hughson’s Angus is pitch-perfect throughout. His discovery of the reality of what happened, is less a cry than a howl of anguish, an animal response that cuts through the frozen blocks of his memory to release truth, but also pain. It is a wonderfully layered performance. As his inseparable friend and keeper, Jonathan Goad delivers a strong and utterly convincing Morgan, cynical observer of the wet-behind-the ears Torontonian in the play’s earlier moments, but racked with guilt as he is compelled to tell the truth of the past. There is a moral, after all, in the duty of care that one friend provides for the other, even if it is born of guilt, and a debt that can never be repaid.

Talked together and then in threes, one tall and one taller. The tall one was liked by the drawer, the tall one, the farmer.

Successive stagings of The Drawer Boy have given it new life (Nina Lee Aquino’s 2018 production post-colonial casting of an Indigenous and Black actor as the two farmers made exemplary sense). Garratt sets up his own production with a half-hour musical prelude (the accomplished Sound designer is Lyon Smith) which proves to be anything but incidental to the performance. The musicians are the talented Anne Lederman and Graham Hargrove and the multiple instruments that they play do more than establish a mood and rural context. Their performance also returns us to what may be the most compelling feature of Healey’s play- its central use of sound to deliver character and event.

The Drawer Boy’s re-enactment of The Farm Show’s origins has traditionally cast it in relation to what is generically a creation story — and this framing has stuck to it like a burr on a pig’s tail, as they might say down on the farm in Huron County. But, it is another Canadian theatrical tradition (and its seminal playwright) which may offer an equally important framework for talking about Healey’s play. “ Listen”, James Reaney counselled in his Listeners’ workshop in the loft of an old Legion hall in London 1968, and his injunction anticipates his experiments with sound throughout his plays from this point onward.

In his epochal trilogy, The Donnellys, his children’s plays, his collaborative writing of opera, and throughout his remarkably multi-disciplinary work, Reaney emphasized the acoustic surround of his plays. He revelled in whistles, word-lists, music, and incidental sound. (His concept of the sonic environment echoes Canadian composer R. Murray Shafer’s influential notion of the acoustic environment.) The sonic landscape of Reaney’s work delivers Canadian history not through documentary mimetic tradition, but as poetry, rooted in a powerful aural landscape which tells its story though sound.

Healey’s play returns us to oral traditions: the fable, tall tale, and ballad (“two tall girls, one tall and one taller”, echoes through successive characters and situations, until the phrase becomes incantatory and part of the music of the play). When his farmers tell of the stories and events that haunt them, they speak in a language of repetition and reversal, their idiom that of jagged sound made by whatever home-grown instrument is at hand. Instead of word-lists, Angus is preoccupied with the roll-call of numbers rattling through his brain (and it is a number, recalled to memory, that turns out to deliver a signal moment in the play, the truth of what really happened). It is plain speech but it is also plain speech as poetry and it creates heightened registers of language at key moments in the play.

Could it be that Gil Garratt was conscious all along of this alternative poetic Canadian line of inheritance to Healey’s The Drawer Boy, even as he pays homage to its documentary The Farm Show genesis in his program notes? He has clearly given his first-rate cast of actors free rein to explore the rhythmic inner sound of the play, even as he sets it up with a musical prelude, drawn from the idiom of country life, in ways that conspire to make a whole of the parts. There is no hint of another way of telling history in the director’s comments in the play program- unless, that is, he is winking at us, telling us something on the sly. Garratt has put a teasing photo of himself at the very back of The Drawer Boy program, looking quite comfortable lying down in a cemetery, face up, fine hat, with his hands crossed over his chest. His head rests casually  on the tombstone directly behind him, the largest and most immediate, in a visually receding field of monuments.   At the top it reads unmistakeably in  bold–faced letters, DONNELLY.

This article was originally published by Capital Critics Circle on July 22, 2022, and has been reposted with permission. To read the original article, click here.

Six Must-Watch Plays At The Theatre Olympics In Mumbai