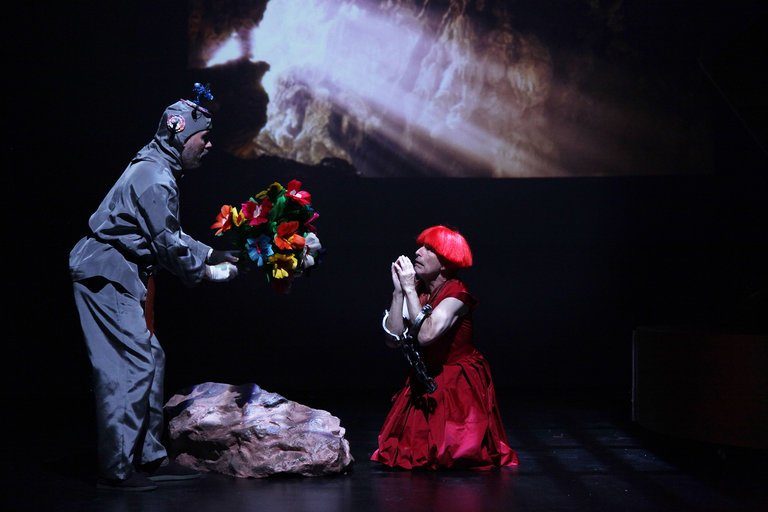 In 1967, not one but two productions of Charles Ludlam’s deliciously demented Conquest Of The Universe Or When Queens Collide mounted by rival queer, avant-garde theater companies opened downtown in New York. What a time to be alive.

The single, originally planned production was to have been a collaboration between then-twenty-four-year-old Ludlam and director John Vaccaro, but the two quarreled, resulting in a schism. Henceforth Vaccaro’s Play-House of the Ridiculous and Ludlam’s Ridiculous Theatrical Company would operate independently, the former more closely aligned with the personalities and glam-sleaze aesthetic favored by Andy Warhol’s Factory crowd. Their production at the Bouwerie Lane Theatre has been described as “performed by people on drugs, for people on drugs.” Ludlam’s company’s inaugural staging was played on weekends after midnight at Tambellini’s Gate, an old movie theater on Second Avenue and 10th Street, to “small but enthusiastic audiences.” Performances began after the last film of the evening let out and lasted until three or four o’clock in the morning with actors dashing on and off the makeshift stage throughout to run their own lights. The company persisted in nomad-like fashion until they were able to sign a lease in 1978, making the basement theater at 1 Sheridan Square in the West Village their home. Ludlam’s Ridiculous plays were highly sophisticated literary travesties, blending lightly-worn classical erudition with ubiquitous references to popular culture and the lowest of lowbrow humor. He favored drag performers in key roles, often casting himself and gleefully, brazenly stealing the show in such parts. He played Camille in an adaptation of Dumas’s La Dame Aux Camélias with a transparently artificial falsetto voice and his hairy chest on full display. In 1984 Ludlam and his lover Everett Quinton played eight characters (male, female, and werewolf) in rapid rotation in The Mystery Of Irma Vep, which parodied melodrama, farce, the psychological thriller, and the penny dreadful. While the strength of some of the plays now seems inextricably bound up with Ludlam’s personal charisma as a performer or the peculiar, anarchic vitality of the time and place in which they were initially produced, others have since been successfully performed all over the world.

Ludlam’s influence on the avant-garde has been at least as profound as that of the Living Theatre, Mabou Mines, or the Wooster Group, but is less known. Rather than hold on through still-prolific sixth or seventh decades as the artistic directors of those companies have, Ludlam died in 1987 from complications of AIDS at the age of just forty-four. He had little interest in the identity politicking that has again become de rigueur among social justice warriors. He was himself a member of a marginalized group, but Ludlam was in no way a marginal artist and never resigned himself to marginality. “One of the problems with accepting a tag like avant-garde or gay theater or neo-post-infra-realism,” he said, “is that you’re a bit like an Indian on a reservation selling trinkets to the tourists. You have no real interaction with the culture, and whatever impact you may have had on that culture is nullified.” Ludlam the impresario, who titled a 1968 play Turds In Hell, saw no reason why his flamboyant, cerebral, bawdy, excessive vision of the universe shouldn’t ultimately find widespread acceptance. When he died he was in talks with Joe Papp to direct a production of Titus Andronicus at the Public Theater and had recently wrapped a role in a mainstream film. The world might have been quite different had he lived.

Everett Quinton, who assumed leadership of the Ridiculous Theatrical Company after his partner’s death, has done a commendable job of keeping at least Ludlam’s legacy alive, and this year to celebrate the fiftieth anniversary of the company’s inception has directed a revival of Conquest Of The Universe at La Mama. A polymorphously perverse riff on Christopher Marlowe’s Tamburlaine, Conquest follows the adventures of the President of Earth, a man with prodigious appetites for both sex and power. Ludlam’s Tamberlaine is out to subjugate not merely continents but planets, and he weeps like Alexander the Great when he realizes that “there are no more worlds to conquer.” Ludlam freely interpolates material from Hamlet and other Elizabethan plays when exalted matters of revenge, sacrifice, or redemption are at issue, but the primary engine of the play is libidinal and the tone irreverent if not downright coprophilic. It is a camp masterpiece, one of the first. Susan Sontag writes that in camp, “the essential element is seriousness, a seriousness that fails. Of course, not all seriousness that fails can be redeemed as Camp. Only that which has the proper mixture of the exaggerated, the fantastic, the passionate, and the naïve.”

Quinton’s fiftieth-anniversary production is a bit of an exercise in nostalgia by design, and therefore perhaps inevitably lacks some of the passion and special naiveté that must have made Conquest a revelation in 1967. One can easily imagine a zanier, sharper, more manic version being better. Quinton also dresses this production up with some unnecessary modern flourishes like video projections of interplanetary travel that threaten to throw off the balance between exuberant artificiality and dubiously adequate means that the play requires. Conquest fails most compellingly in its seriousness when the performers are asked to accomplish too much with too little, as when the middle-aged drag queen playing Tamberlaine’s wife (Brian Belovitch) gives birth to nonuplets on stage by yanking an assortment of battered baby dolls out from under his dress and haphazardly hurling them in the general direction of his castmates as he wails. Most get caught. Some miss their mark and hit the floor. Some of their heads pop off. No matter. Members of the audience laugh or cringe or simply let their jaws hang open. It’s perfect. In another scene, Venus receives visitor after visitor in bed until a complicated foursome is being enacted using some actual nudity and some prosthetic genitalia that eventually get unceremoniously “chopped” off and flung out of sight upstage. The moment might have been stronger had the cast either invested more fully in the flesh-and-blood obscenity of the gesture or played up its cartoonishness. As it was, this scene and many others seemed to come to rest on some uneasy middle ground: not quite reckless enough, not quite expert enough, not quite clean, but not quite dirty either.

Still, there are flashes of inspired, mannered silliness, and overall this revival is an eminently worthwhile endeavor. Quinton himself captivates, nimbly alternating between the roles of a twin brother and sister pair who harbor incestuous desires for one another, parts Ludlam originally wrote for himself. Lenys Samá is relentlessly filthy as the King of Mars turned sex slave-cum-court jester. An unexpected bit of audience participation put the cherry on the top of the performance I attended, demonstrating, perhaps, how much the world (or at least the East Village) has changed to accommodate Ludlam’s worldview—John Gutierrez was performing his sultry dance as the Ballerina of Uranus when he motioned for a volunteer to help him unzip his costume. The obliging spectator who came forward was a woman in her sixties with thick-rimmed glasses and neon purple hair. She went above and beyond the call of duty when she joined in the dance, grinding up against the Ballerina from behind until she had to be gently restrained and ushered back to her seat. The play has three endings, each somehow stranger and more glorious than the last. First, the entire cast dies violently, in the style of an Elizabethan tragedy, only with cheap, red paper streamers signifying blood histrionically launched into the audience every time a new stab wound is opened. Second, Venus leads the company in a rousing rendition of the Christian hymn There Is Power In The Blood. Finally, an ensemble member steps forward and delivers a sober, earnest speech in the style of a public service announcement about the need for the state to open more clinics to assist the populace in overcoming the currently widespread problem of sexual dissatisfaction.

This Conquest (and the behavior of the randy senior citizens in its audience) offers an opportunity to reflect with a certain satisfaction on how much social mores have changed and how many taboos have fallen away over the past half century. At the same time, it boggles the mind to recall that the Ridiculous Theatrical Company was at one time the beneficiary of regular National Endowment for the Arts grants, something that would obviously be inconceivable today. Ludlam said “I don’t have an ax to grind even though I do have a mission. That mission is to have a theater that can offer possibilities that aren’t being explored elsewhere.” To be an artist is to never concede that there are no possibilities left to explore, that there are no worlds left to conquer. It is difficult to imagine how an artist of Ludlam’s audacity could sustain the kind of career he had in today’s New York City, but his legend survives to inspire, off-end, and to remind us, as he wrote, that “You are a living mockery of your own ideals. If not, you have set your ideals too low.”

Conquest Of The Universe Or When Queens Collide