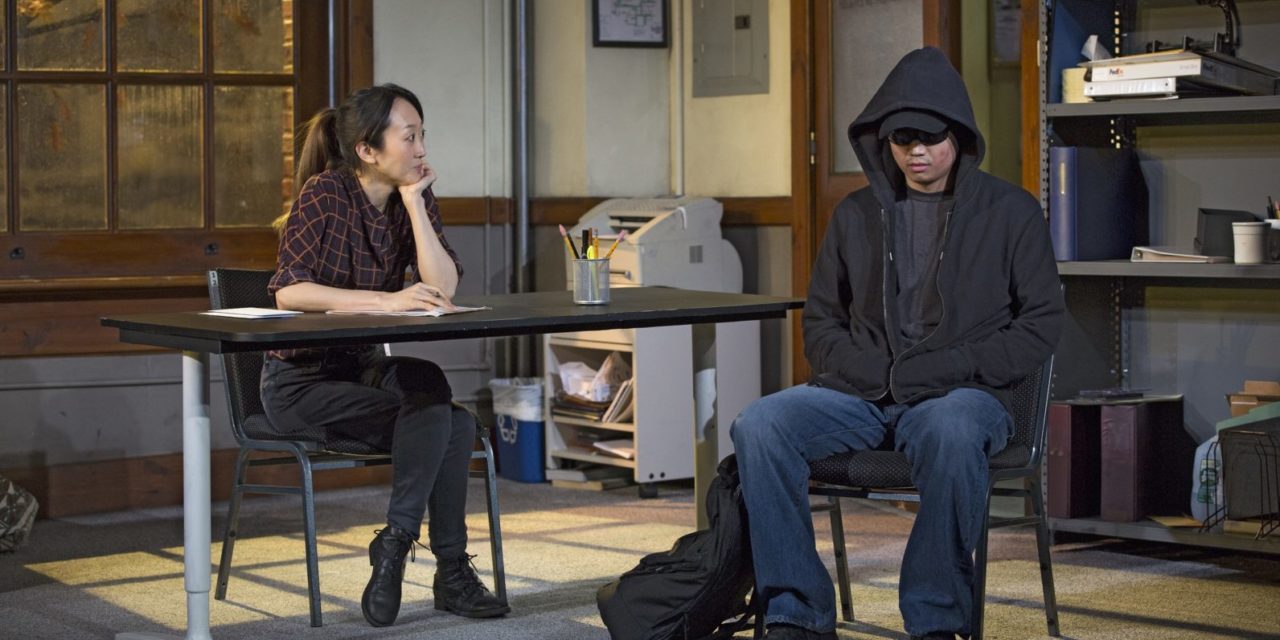 Julia Cho’s Office Hour began life as a reaction to the 2007 mass-shooting at Virginia Tech. It ruminates on the persistent and ghastly problem of gun violence in the U.S. by dramatizing a nail-biting encounter between a college writing instructor and a silent, stony, black-clad, loner student very like the Virginia Tech shooter, a Korean-American named Seung-Hui Cho. Julia Cho is Korean-American, and rage at racial discrimination is a point of connection for her fictional instructor and student, both Asian-Americans.

In the first scene, the instructor, an adjunct named Gina (Sue Jean Kim), is warned about the student, Dennis (Ki Hong Lee), by two English Department colleagues who have found his truculent and withdrawn presence creepy and his writing alarming—suffused with raw aggression and mechanistic sexual violence. The colleagues (a white man and black woman) complain that even though Dennis clearly fits the profile of “a shooter,” their college has declined to intervene, and they expect Gina to share their dread. Instead, she sets out to reach Dennis during a private conversation.

What follows is a 75-minute encounter (the whole play is 90 minutes) in which Gina tries to coax Dennis out of his shell with a combination of ordinary kindness, personal confession, and teacherly blandishment. That none of it seems to lead anywhere—she gets him talking but neither character ever alters any position—ultimately feels more frustrating than the play’s many plausibility problems. I’m not speaking, for the moment, about Cho’s maddeningly indeterminate structure in which the story keeps screeching to a halt with violent shocks, only to continue as if that violence didn’t happen. I’m speaking rather of large leaks in the basic situation.

For one thing, Dennis is so blatantly menacing that he’s a walking red flag that, post-Virginia Tech, no American university would ignore. Any student with as many risk-factors as him nowadays would be tagged for mandatory intervention and his teachers supplied with special security and instructions not to be alone with him. I say that as a long-time college professor who has dealt with plenty of bizarre behavioral cases.

More egregious, it’s impossible to believe that a mature woman like Gina would rush to spill her guts with a surly kid who’s never spoken to her (sharing stories of her stalled career, unsupportive parents, broken marriage), just on a hunch that a touch of racial solidarity will move him. I also don’t buy that such an insecure and underpaid adjunct would risk so much for her job.

Cho clearly wants us to accept that Gina is driven by a simple desire to help Dennis, to try to understand him when no one else has bothered. The trouble is that her efforts don’t resemble idealism so much as suicidal delusion. She ends up seeming like the one who isn’t understood, despite the actress Sue Jean Kim’s heroic efforts to flesh her out in Neel Keller’s swift and smooth Public Theater production.

It’s also worth mentioning that the majority of American mass-shooters are white—a rather important fact that has finally received due attention and commentary in the years since Virginia Tech. Think of Aurora, Newtown, Las Vegas, and all too many others. The Stony Brook sociologist Michael Kimmel has attributed this preponderance to a class-based feeling of “aggrieved entitlement.” In light of this, it’s hard to see how Office Hour advances the national conversation by inconclusively emphasizing the factor of minority-resentment.

As already mentioned, Cho’s play has a stop-and-restart, alternative-reality structure punctuated by jarring gunshots. In recent years other, more philosophically minded playwrights have also used this technique—Nick Payne in Constellations, for instance, and Brian Yorkey in his book for the musical If/Then—to juxtapose parallel universes. These alternatives had a wistful quality to them as we pondered the various coulda, woulda, and shoulda-been scenarios. No one feels wistful about a subject as brutal, frightening, and rawly topical as gun violence.

Because Office Hour is structured as a thriller, it occurred to me about halfway through that its stop-and-restart technique recalled, more than anything else, the megapopular R.L. Stine kiddie-thriller series Goosebumps—You Choose The Scare! When they were young, my kids used to clamor for those books at bedtime. What they especially liked, I felt, was the way the choice of plot trajectories shortcircuited any buildup of real fear. The deflections helped them settle down into comfy slumber, convinced as much that none of the scary stuff had actually happened, as that all of it had.

This post originally appeared on Jonathan Kalb on November 24, 2017, and has been reposted with permission. 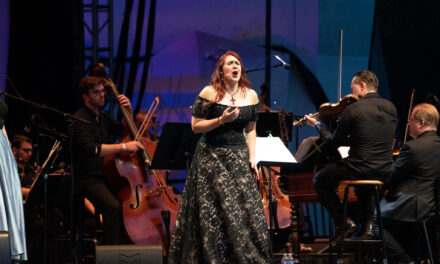