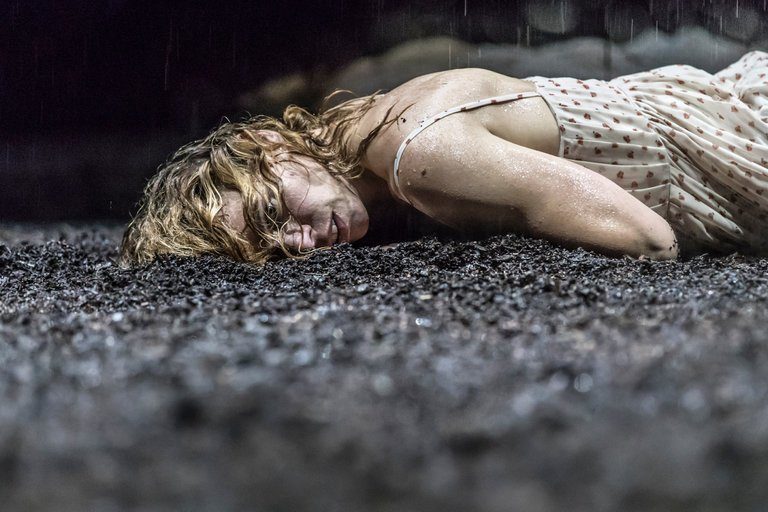 Yerma in London, as the subtitle states, is a contemporary adaptation of  Federico García Lorca’s Yerma,  a work by one of the great 20th Century Spanish playwrights.  It was written in 1934, two years before the tragic assassination of the writer by Franco’s forces.

Director Simon Stone’s  reworking of the play sets it in an Expressionist design environment where a young couple, (she and John as they are mentioned in the cast) are enclosed in a glass case that creates a mirror effect for the audience. We, in the cinema, see the British audience reflected at the back of the stage so that it gives an impression of an audience sitting on both sides of the stage, staring into the most uncomfortably intimate, increasingly violent encounters, appearing as the secular Calvary of this doomed couple. Gregorian chants, religious and varying forms of music in Spanish and Latin, as well as a reference to a particular Japanese death ritual, mark the seven chapters of the tale that announce each step of this painful process in Yerma’s desperate search to become pregnant.

Little by little, Yerma’s  desire and frustration grow within in her like a destructive beast, fanned by the fact that her sister can conceive so easily and by a self-centred mother who is unable to understand her daughter’s plight. There is also the ex-boyfriend who, in Yerma’s mind becomes the final chance at motherhood who is still attracted to her but cannot understand the depth of her need.  In this version, the gossiping repressive religious atmosphere of Southern  Spain that drove the young wife mad in Lorca’s version, Yerma responds to her pain by writing about her childless life and family problems and posting them on a blog for all to see. The internet replaces the repressive attitude of the Church which has contaminated the local women and this is the act that finally tears the couple apart.

Surrounded by individuals who cannot see who she is, Billie Piper’s hypersensitive Yerma molds her body and her whole self into a  tragic creature who can no longer control the inner pain that slides between laughing and crying, between states of numbness and wildly hysterical outbursts as she is overtaken by her burning obsession. The final scenes with her husband are so intense, so teetering on the brink of true self-destruction as she wallows in the slime around her,  that one almost has trouble watching the screen.

Presenting the play essentially as a ritual of death brilliantly captures the essence of Lorca’s work in spite of the change of time and location.  The music and singing play a central role while the unhinging of the central character is located both in moments of violent poetry that collide with extremely realistic exchanges – dialogues becoming simultaneous monologues that incarnate the coming disaster as the verbal communication breaks down even before the emotional and physical collapse begin.

Director Simon Stone has brought together an extraordinary orchestration of words, of sound, of music and human interplay that have taken  Lorca from his southern Spanish world into our contemporary theatrical world without losing one bit of Yerma’s meaning. Such pain and such pleasure were a welcome experience in this case.

YERMA  from the National Theatre Live series, performed at the Young Vic company in London.

A British blog ends  its own review of the play  with an interesting comment about the link between directors and playwrights:

Stone’s production is total theatre in the truest sense, with all elements fueling a cohesive, thoroughly convincing, updated world in which the story exists. From the most delicate metaphor spoken to the boldest design choice, nothing seems extraneous or touching the wrong note and I’m persuaded, more than ever, that the rise of the auteur/director that we’ve seen in London in the last few years, at theatres such as The Young Vic and The Almeida, allows for a more fully realised theatrical vision than the traditional separation of playwright and director.”

This post originally appeared in Capital Critics Circle on September 22, 2017 and has been reposted with permission.