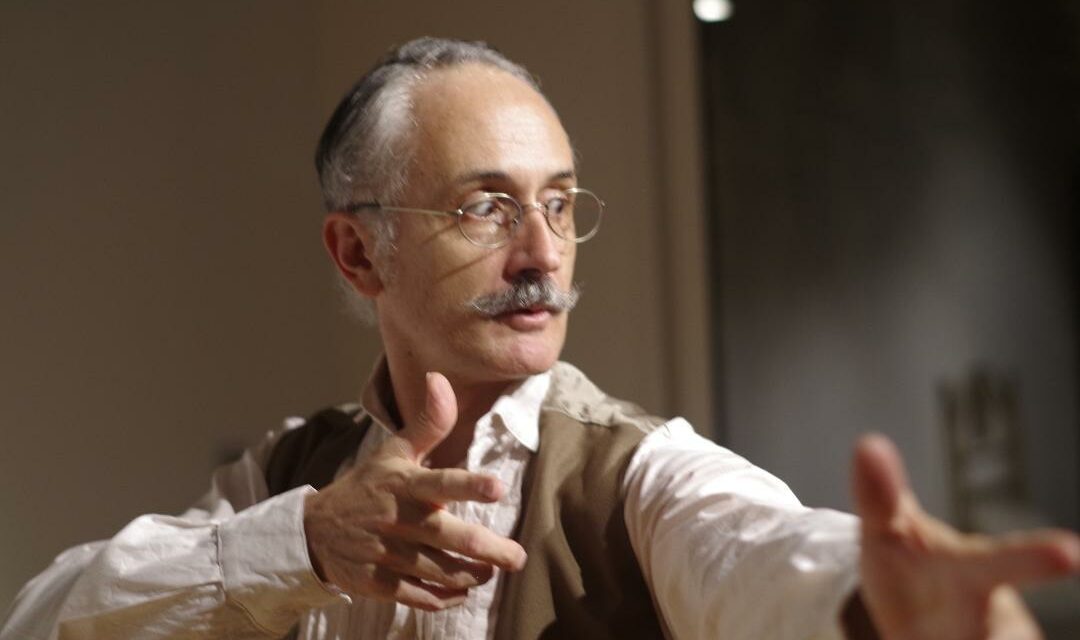 Traditional literary analysis has focused on a tripartite division of genres as if they were isolated, watertight compartments. Narrative, poetry, and drama seem to occupy unique areas, separated by insurmountable barriers. However, sometimes the magic of theatre enables us to transcend the limits of traditional genres, whose borders not only become permeable but also allow for the creation of a new, hybrid aesthetic form marked by heterogeneity, harmony, and its own value. This is the case of the play Lugones, a new Argentine play in which the lyric voice is the true protagonist of the dramatic scene. 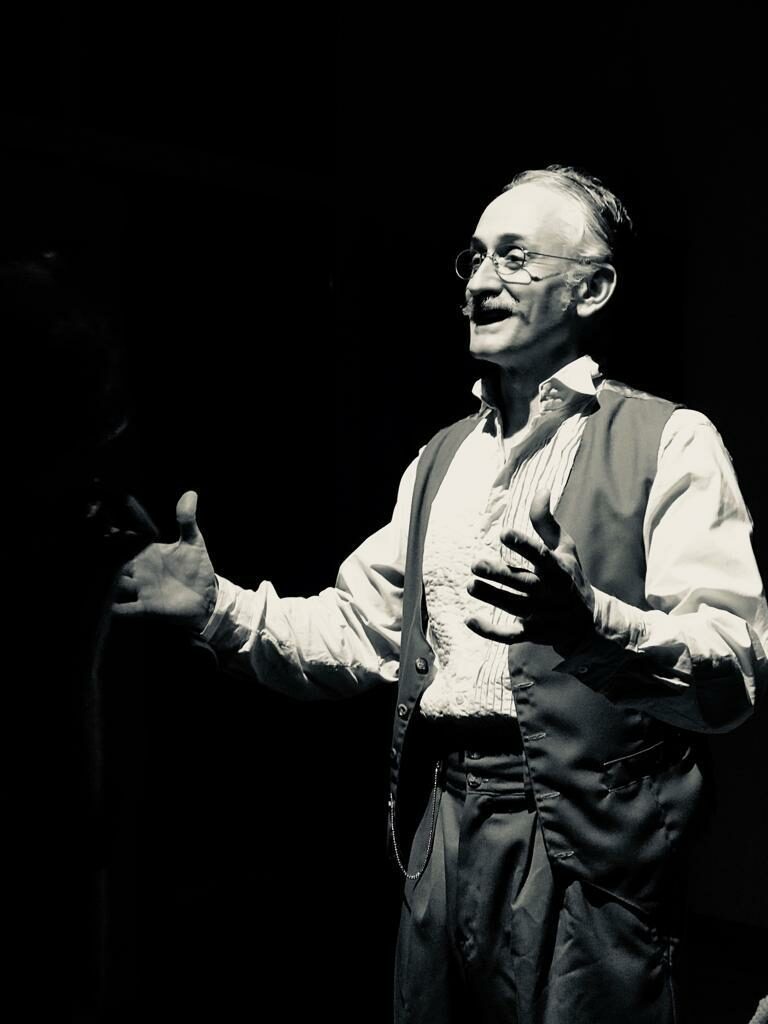 Lugones, written and directed by Mariano Moro and performed by Juan Pablo Carrasco, premiered in September 2018 in the city of Mar del Plata, Moro’s home town where he is now at the helm of the main Auditorium theater complex. The monologue was first staged at Villa Victoria, a very opportune environment for this work since it is contemporary to the poet who gives name and life to this play (Villa Victoria is now known as the Victoria Ocampo Cultural Center, and it houses the 1912 English-styled summer residence that originally belonged to the renowned Argentine intellectual and writer of the same name). During this current summer theater season in Argentina, Lugones is being performed once again in Mar del Plata, this time at the Cuatro Elementos Espacio Teatral (Four Elements Theatre Space), in the theater called “Fire.” There the austere scenography is preserved, a reflection of the multifaceted protagonist’s emotions and lifestyle during the last moments of his life. As a prelude to the performance on stage, and with that same austerity, the actor who embodies Lugones strolls in character among the future spectators while they wait, absorbed by his presence, to enter to the theater. This clever artistic intervention predisposes the audience to empathize with the situation that is later dramatized throughout the play. Additionally, the voice of Jorge Luis Borges invites the public to feel that space, creating a halo of intimate expectation. 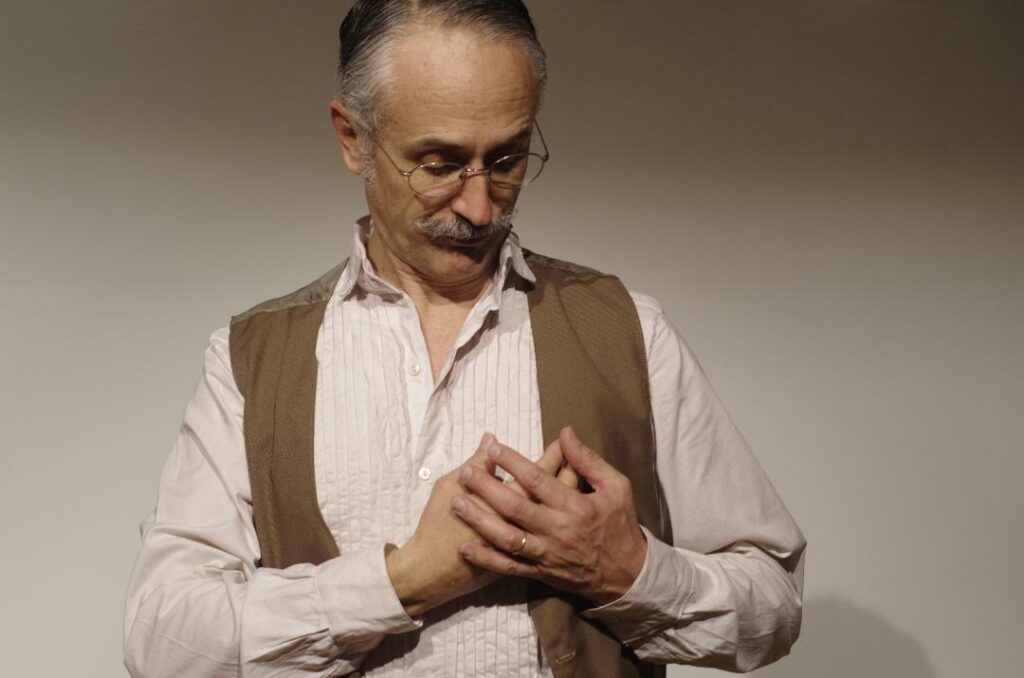 Leopoldo Lugones was a key figure in the twentieth-century intellectual life of Argentina, as he was also a journalist, historian, educator, translator, philologist, politician, and diplomat. The action of Moro’s play is set in El Tigre Delta, in the province of Buenos Aires, in 1938. The monologue takes place in a hostel room during the critical moments when Lugones contemplates suicide. Borges–his great admirer who also is considered, in some aspects, his disciple–described that tragic moment:

“Then, that man, lord of all the words and all the pomp of the word, felt in the gut that reality is not verbal and can be incommunicable and atrocious, and went, quietly and alone, to seek, in the twilight of an island, his death.” 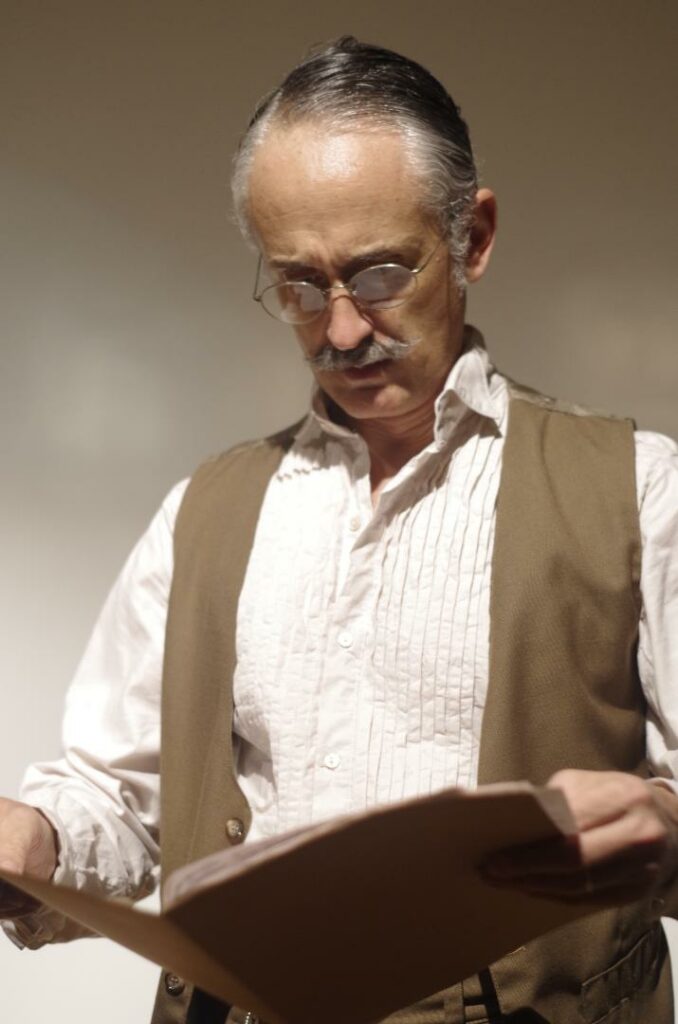 Moro’s elaborate monologue offers spectators a broad, deep, and emotional path through Lugones’ poetic production, and all strophic, metric, and rhyme types cultivated by the writer are addressed. Moro’s text also weaves in the most diverse topics found throughout Lugones’ poetry, ranging from his earlier works published in The Gold Mountains (1897) and in The Garden Twilights (1905), to those that appeared posthumously in Romances Of The Dry River (1938). Lugones’ prolific, lyrical corpus alternates on stage with profound philosophical, moral, and political ideas, all of which accompany the dramatization of the poet’s life story, events, and concerns.

In Lugones, poetry comes alive on stage and becomes the real, magnificent protagonist of this play. This is possible thanks to the solid, congruent tempo of Moro’s text and, in equal proportions, to Carrasco’s masterful performance, overflowing with sensitivity, versatility, and meticulous acting that blends beautifully with the flow of the word. His interpretation of both text and character deeply moves even the less seasoned viewer and allows one to experience the ineffable pleasure and exuberance of well-spoken, exquisite, heartfelt poetry. 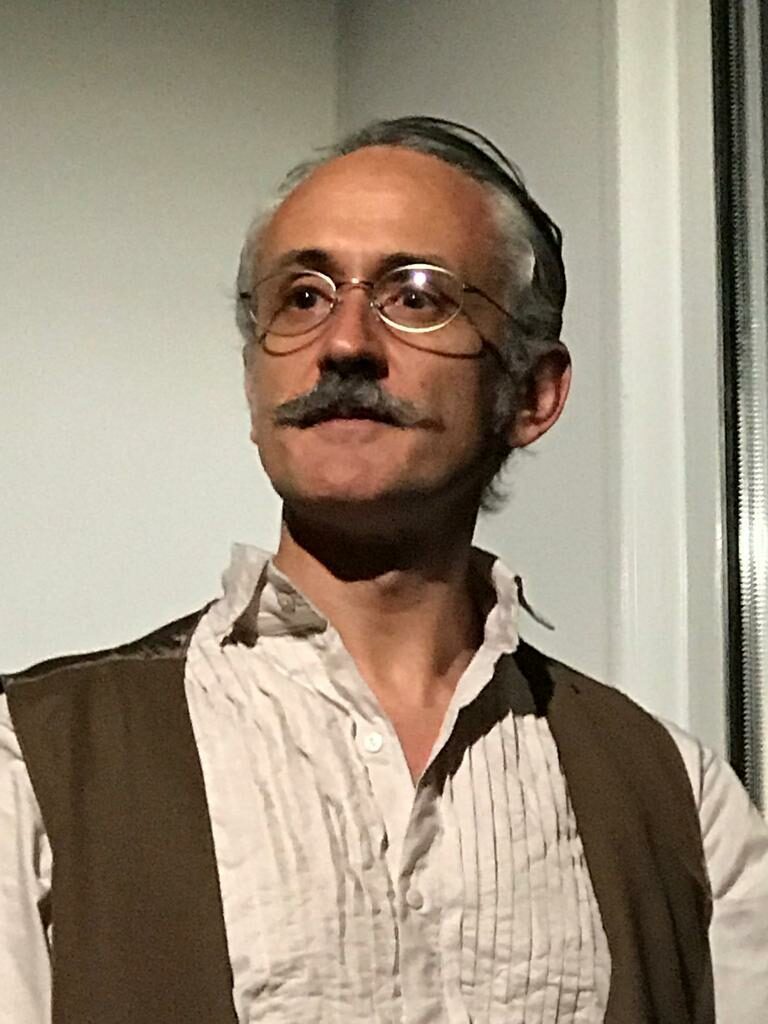 Mariano Moro has been devoted to the theatre since his youth. Among the many plays that he has written and directed, two other monologues about great writers stand out: 1. Quien lo probó lo sabe (Who tried it, knows it), about Lope de Vega, and 2. Alfonsina y los hombres (Alfonsina and men), about the poetess Alfonsina Storni, who ended her life precisely the same year as Leopoldo Lugones did. In Lugones, Moro highlights the value per se of this extraordinary author’s poetry. Moro won the Estrella de Mar Award for best director of the 2019 summer season with this monologue, which offers a real tribute to Lugones without focusing on the political vicissitudes for which he was often judged, nor the speculations and morbid details of his suicide. On the contrary, the public is invited to participate in a journey through Lugones’ extraordinary ability to work with language and through the proliferation of the feelings, imagination, and musicality that shine through his verses in the moments before his final hour.

If the opposite of death is desire (emulating Tennessee Williams’ words), in Lugones both poles merge to the point of apotheosis. Mariano Moro, Leopoldo Lugones, and Juan Pablo Carrasco together form a dynamic triad that leads the public to rediscover the value of language while it is being recited. Throughout the performance of this monologue, it is often possible to see language vibrate in a body as if it were a tuning fork. The poetry floods the theatrical space with its cadence, its diaphanous resonance, and its powerful message. Although Lugones died eighty years ago, he continues to live among us with each performance of Moro’s play. The result is a lyrical caress of the spirit in this time of storms, which evokes some of Lugones’ more renowned verses: 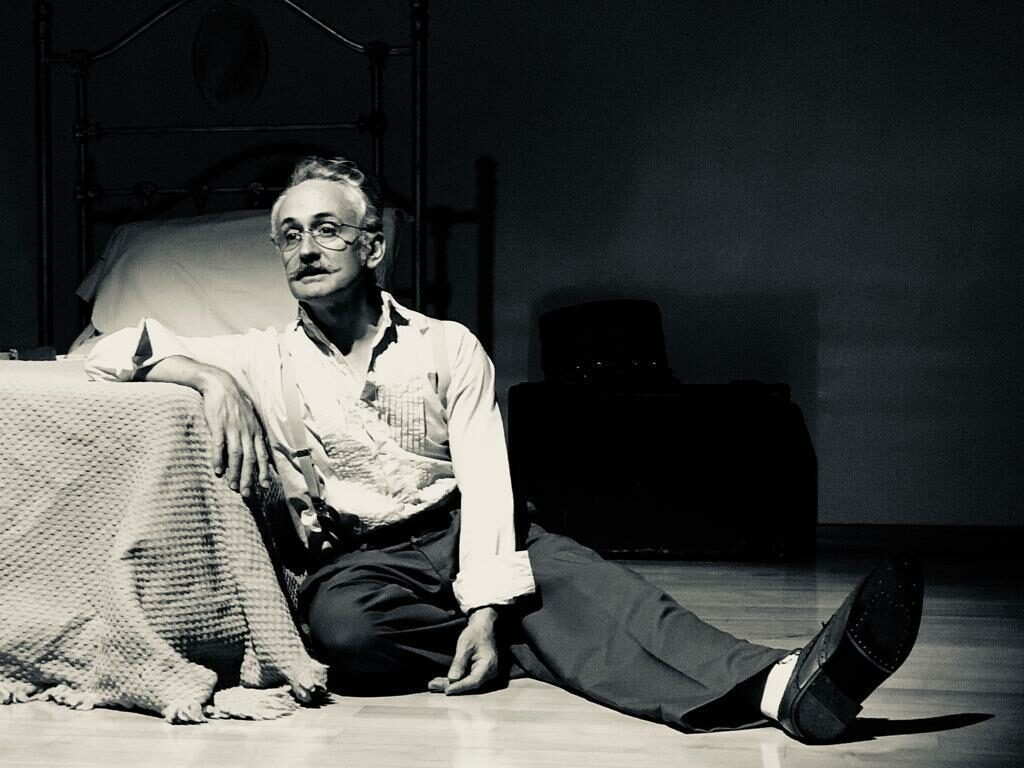