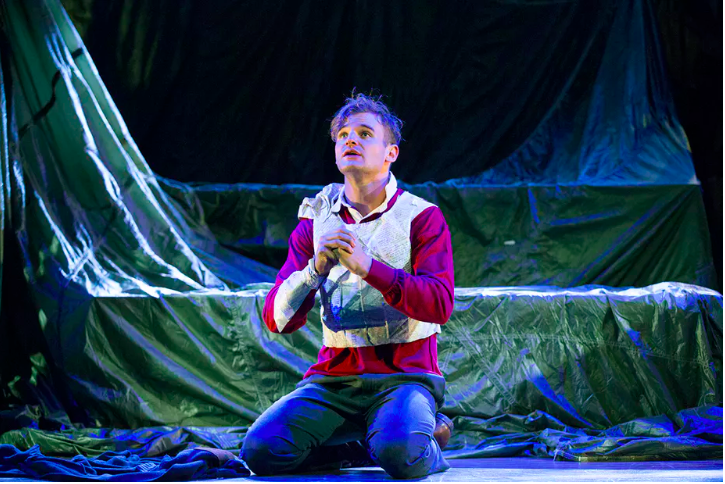 The limitations of the theatre become the production’s emotional heart. Michele Mossop

Bell Shakespeare’s new production of William Shakespeare’s Henry V–which opened in Canberra on June 14–interrogates the complexities of war through a unique framing device: its scenes are played out by schoolchildren taking refuge during another conflict–the second world war.

In this creative production, the English invasion of France and the famous battle of Agincourt are “crammed” into the confines of an unglamourous classroom. There are old wooden bookshelves, a blackboard, piles of books.

Here, director Damien Ryan (founder and artistic director of Sport for Jove) uses a schoolroom as an entry-point into the world of Henry V. It looks much like the context in which many of us first encountered Shakespeare, but this deceptively commonplace setting belies the dynamic and emotionally powerful production that will be contained within this “little room.” 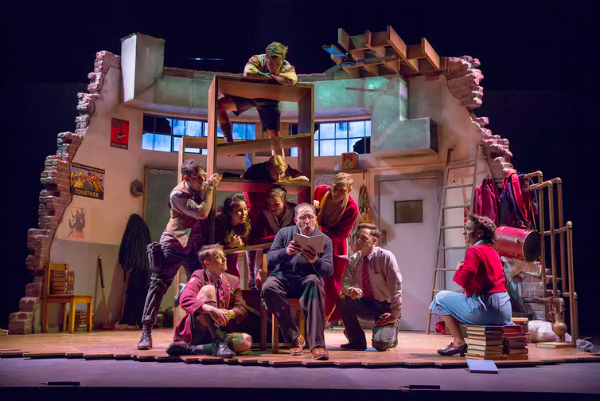 The humble setting toys deliberately with the concerns of the play’s Chorus, which wonders how the grandness of a battle can be represented onstage. How, asks the Chorus doubtingly, can “this wooden O” (a reference to early modern theatres such as the Globe) contain “the vasty fields of France”?

Bell Shakespeare’s production uses the same foil: it asks how a classroom can contain the epic scale of Shakespeare’s play. We are lured into the lower register of the classroom before we ascend to the imagined heights of Harfleur and Agincourt.

But this is not just a classroom: it’s also a bomb shelter for a group of students during the Luftwaffe Blitz of London in 1940-1941.

The production takes its time in setting up this play-within-a-play framework. Ryan creates the world of London in the 1940s before we even get to Shakespeare’s Henry V. First, the students – led by their charismatic teacher, played with dignity and poignancy by Keith Agius – briefly enact key scenes from the end of Shakespeare’s history plays of Richard II and then Henry IV. This is a fast-paced history lesson, a background on the younger days of Henry V, and also serves to clarify the play-within-a-play structure that guides this production.

By the time the students pick up their copies of Henry V and prepare to begin their performance of the play, we are firmly entrenched in their world. This is aided by the authentic camaraderie of the ensemble cast, with standouts including Danielle King (Mistress Quickly, Exeter, and Alice), Matthew Backer (Dauphin and Nym), and Drew Livingston (Fluellen and the production’s vocals composer, who also leads a haunting rendition of the patriotic British hymn I Vow to Thee, My Country).

At every turn, there is a double life to this production; the performance always straddles two worlds, two historical fictions. Sometimes they are so closely overlapped that we cannot even see the join; at other times these worlds are suddenly sprung apart.

An air-raid siren or bomb blast will forcibly remind us that we’re in London of 1941, not the French fields of 1415. The captured French soldier of the original play becomes a German pilot. The fields of Agincourt are created by the billowing material of the German’s parachute. In this way, 20th-century London not only intrudes but shapes the world of Henry V.

This alignment of 1940s London and 15th-century France proves most effective in the deaths that occur throughout. The victims of Agincourt are realized shockingly and effectively in the parallel victims of the London Blitz. 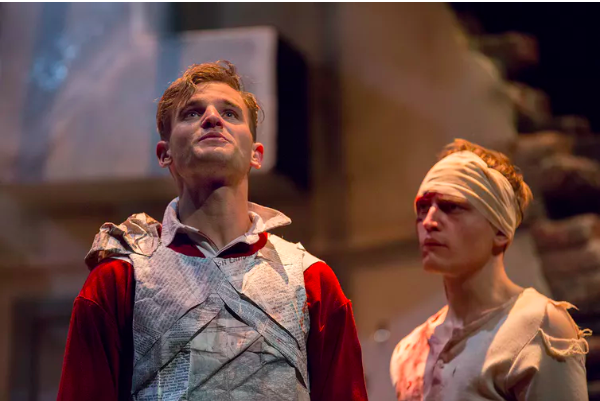 The offstage death of John Falstaff (a lovable rogue and old friend of Henry’s familiar to audiences from his presence in other Shakespeare plays) is parallelled by the death of the teacher/Chorus. This cleverly brings home the importance of Falstaff who, while probably well-known and loved by an early modern spectator, is not nearly as familiar in today’s popular imagination.

The victims of both Agincourt and London linger as ghosts in the black space around the wooden O of the classroom (the set design mirrors the “wooden O” of the Globe theatre with its curved walls and floors). The interweaving of those two threads proves mutually beneficial.

Every moment of this production is meticulously thought-out and precisely executed. There are fast-paced and frequent set changes as the bookshelves and other classroom props are moved ingeniously around to recreate London, Southampton, the voyage across the channel, the French court, the siege at Harfleur, troops on the march, the battle at Agincourt, and the Treaty of Troyes.

Sheets, torches, toy ships, and soldiers are used to make silhouettes of the action; the angled bookshelves swaying with imagined waves become a ship; a pommel horse represents the Dauphin’s beloved warhorse. The seamless onstage transitions are also reminders, as the Chorus explains, that the theatre can only do so much, and spectators are called upon to use our imaginations and “piece out” the theatre’s imperfections “with your thoughts”.

But this production never lets its audience linger too long in the world of Henry’s France; we are always reminded that this is a performance by children in their own very real war zone. The set changes perfectly tread the fine line between simultaneously showing us the theatricality and helping us to forget it.

It’s a very precarious balance that is managed flawlessly, partly because, when we see the artifice of Henry V, we may forget that behind this is another layer of theatricality. We see that Henry’s crown is only paper, theatrical artifice made by the London students, but we must look harder to see that the students are just as unreal as Henry’s crown. That’s the beauty of the play-within-a-play and it is Shakespearean meta-theatricality at its best. 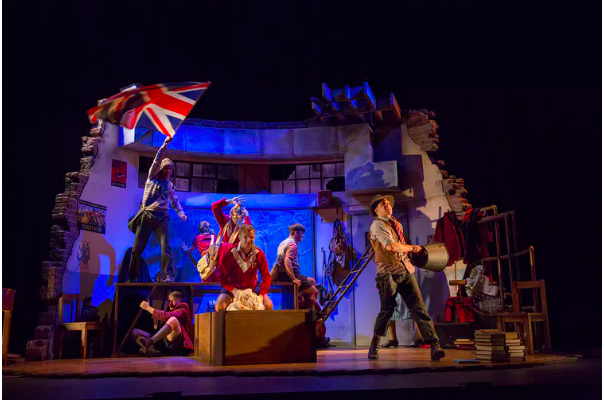 The play complicates any sense of harmony in its closing scenes. Michael Sheasby’s Henry is delightfully warm and funny in his wooing of Princess Katherine (the elegant and versatile Eloise Winestock), although some of the comic potential is lost when Katherine, in a change from the play-text, recites Henry’s threats at the siege of Harfleur back to him. The wooing Henry is confronted by the words of warring Henry, who warned that French infants would be “spitted upon pikes.”

The ending is further disrupted when the students read the Chorus’s epilogue and discover that after this hard-fought victory, England will lose France. There are gasps: “they lost France.” Henry’s face is hypnotic to watch: he is shocked, horrified, crestfallen.

Everything has been for nothing. The students’ copies of Henry V are thrown to the floor in disgust.

This production takes the concern expressed by Shakespeare’s Chorus regarding the inadequacy of the stage and reverses it: instead of simply apologizing for the homely, domestic, inadequate setting of such an immense tale, Ryan uses the homeliness, the familiarity and domesticity to make his audience feel.

The vulnerabilities and limitations of the theatre become the play’s emotional heart. As the program notes underline, Ryan explicitly connects the children of 1415 with those of the 1940s, as well as the children of 2014 in Iraq, Syria, and South Sudan.

This kind of connection is exactly what we should be doing with Shakespeare.

This post originally appeared on The Conversation on June 16, 2014, and has been reposted with permission.