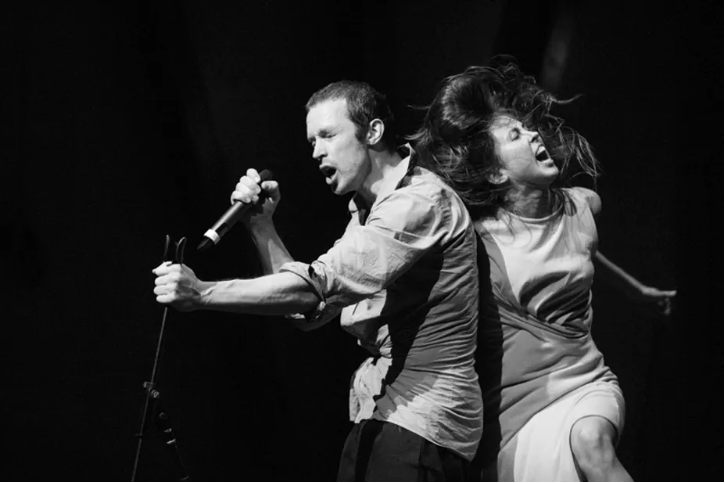 I’ve often lamented that choosing to study the most complex organisms on Earth was the dumbest idea I’ve ever had; so I am always amazed at how artists represent the mess that is the human experience.

The Complexity of Belonging, now playing at the Melbourne International Arts Festival, is one such representation – and even if I still doubt anything could truly capture the chaos of human striving to connect and to belong, the innovative blending of dance, theatre, and technology in this production is both thought-provoking and engaging.

At first, my unaccustomed brain railed against the multiple activities underway on stage: German director Falk Richter and Chunky Move’s Anouk van Dijk bring us monologues, dance, multimedia vignettes. I struggled to understand what was going on. It really was a sensory assault, but as the production moved forward my brain began to make strategic decisions of where to invest attention and what to ignore.

I found the twitching, frenetic movement of the dancers distracting when other characters were delivering monologues – but when voice and movement were separate, and when the dancers were working in concert, it was quite beautiful.

As the title suggests, the play is about the complexity of human relationships; what we want, what we have – and the space in between.

That pulling, stretching expanse compels some to flail at others in an attempt to grab hold and draw the two poles back together again. This distance was exemplified by the minimal direct interaction between characters, limiting most to staged telephone or Skype conversations. Even in a scene with a therapist and client, the two characters are nowhere near each other on the stage.

There was hardly a social issue that wasn’t at least touched upon: the experience of Indigenous people, immigrants to Australia (old and new), homosexuality, what it means to be a true Australian man and so on. Each different issue embodied the barriers to feeling a sense of belonging.

Given the serious content, I was surprised and delighted at the humor of the piece. There were moments of true comic genius.

The character Josh’s monologue about what he isn’t and what he would like to be revealed a clever, self-deprecating, quiet humor. His Skype conversation with his partner about international commercial surrogacy is sweetly funny.

Lauren’s description of the perfect guy begins calmly but builds to a riotous crescendo – the audience erupting with laughter and applause. This scene was perfectly enhanced by the physical movement of the production, Alya bending and twisting Lauren as she details her desired characteristics all while Stephen leaping from chair to chair in the background. I know it doesn’t sound amazing, but it really, really is.

As a psychologist, I was not happy with the portrayal of the therapist – and downright horrified by the scene in which the therapist attempts to breach the professional relationship boundary. I suspect this was included to illustrate just how far the desperation to connect can drive a person.

But at a time when we are trying to encourage help-seeking for mental illness, presenting therapists as unethical quacks feels like a big step backwards.

While most of the monologues felt as if the characters were speaking directly to the audience, Eloise’s esoteric, existential monologues left me feeling like the play had just been yanked out of my reach. Perhaps this is exactly the experience the performers were attempting to create, but it just left me feeling inadequate and annoyed.

The cast of this play is exceptional and, as the work was devised with them, it really feels like the writing “fits” the performers. So while I may not have felt a connection or shared experience with all of the characters, I felt as if I could know them, and would want to know them.

The Complexity of Belonging is a novel and entertaining production. The breadth of perspectives will appeal to most, and the humour will charm everyone.

This post originally appeared on The Conversation on October 9, 2014, and has been reposted with permission.