Theatre Unleashed: Lauren Gunderson’s “Ada and the Engine” – A Must-See in Koreatown 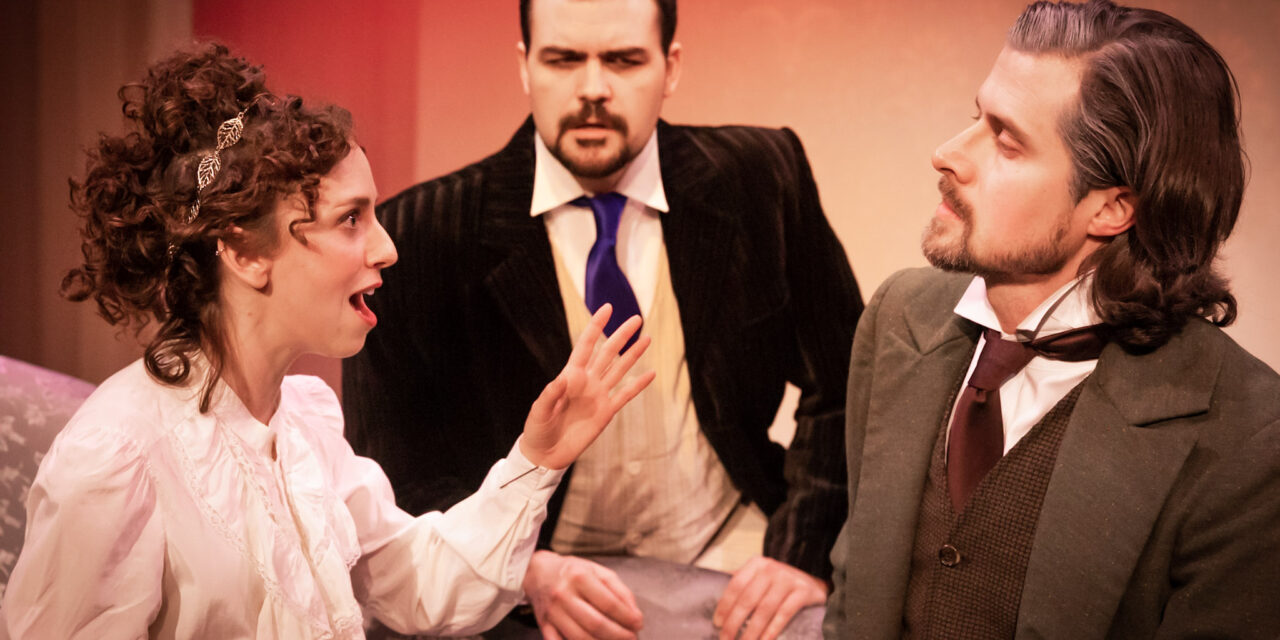 Theatre Unleashed. Jessie Sherman, Gregory Crafts and Alex Knox in "Ada and the Engine" at studio/stage. Photo by Matt Kamimura. 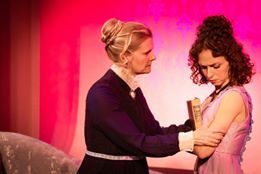 Denise Nicholson and Jessie Sherman in Theatre Unleashed’s production of “Ada and the Engine” at studio/stage.  Photo by Matt Kamimura.

Theatre Unleashed in Los Angeles has a real treat for you if you happen to be in the area Thursday, March 28, 2019, through Sunday March 31st in their production of Ada and the Engine, written by Lauren Gunderson and directed by Heidi Powers.  Theatre Unleashed is one of our many non-profit, small theatre companies in town.  It currently produces at a space called studio/stage in Koreatown.  Founded in 2008, their mission is to “embody original stories, shed light upon lesser-known works by known playwrights, and put new twists on old favorites; all for discerning Los Angeles audiences.”

The studio/stage space is an intimate one and that suits this exploration of the life and loves of Ada Byron Lovelace just fine.  The daughter of Lord Byron and his less than adoring wife Anabella Byron (played by the delightfully unyielding Denise Nicholson), Ada is eighteen years old when we meet her and has only just recently learned who her father is.  Hoping to thwart all things poetic in her daughter, Anabella immerses her daughter in the study of math and sciences and finds to her dismay that this only fuels Ada’s romantic impulses. 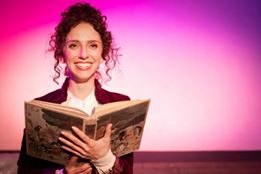 Jessie Sherman brings Ada vividly to life with charming, unceasing energy that finds its main focus in the person of Charles Babbage, played by Alex Knox.  The more than twenty year age difference between the two mathematicians (though not evident in the age difference between the actors) and dreamers of our future does little to diminish their mutual adoration – an adoration that develops into a nearly insurmountable attraction and love for one another that threatens to undo their work on Babbage’s innovative Difference Engine, later known as his Analytical Engine – the father [or should I say mother ] of all computers.

The set, props, and hair are all designed by Jenn Scuderi Crafts, with the set and props distilled down to the minimal elements required to create the sense of the world.  In Babbage’s home, this comes in the form of a sturdy wooden desk and chairs.  In Ada’s home, this is illustrated by a chaise lounge, a small table and a volume of Lord Byron’s poems.  Curtains frame the space and actors are able to enter from just about anywhere, which helps maintain the narrative flow.  Projections on the back wall are used to indicate wallpaper in rooms or to illustrate images from letters that Babbage and Ada share throughout the play but these images are rarely dynamic and the projections don’t really have a role to play until the end – but more on that below. 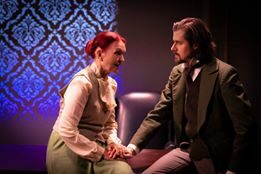 Denise Barrett’s costumes reveal both time and character as Ada starts out in a dress and eventually changes into something closer to a suit in her time while Graydon Schlichter’s sound design weaves its way in and out of the narrative, underscoring descriptive passages of dialogue with sound that illustrates it [when Ada and Babbage consider how loud the Engine might get during its steam-powered operations, for example].

There is tangible chemistry between Ada and Babbage, much to the chagrin of not only Ada’s mother but also Ada’s friend and mathematics mentor Mary Somerville (Michelle Holmes) and her intended Lord Lovelace (Gregory Crafts, who is also the lighting designer).  Somerville says to Babbage, ” know you. You cannot resist your next best idea.”, and though Babbage tries to deny his interest it is apparent in everything Knox brings to the character.

Lovelace, in particular, has no interest in math and is truly a man of his age regarding his sense of what is proper and what is expected in a wife.  He could very easily have become nothing more than a thoughtless smug figure of a husband but Powers and Crafts avoid that oversimplification, endowing him with a real love for a wife he can never truly understand.  Yes, it’s possible if not likely the play has simply conjured up all of this complexity of feeling and that nothing ever existed between Ada and Babbage beyond their shared vision.  Yes, I know, there have been multiple instances over time where Ada’s contribution to the invention of the first computing machine has been questioned and tested and even dismissed.

None of that matters, for the romantic liaison that Gunderson has crafted and Powers has brought to life delivers one of the loveliest and mature romantic moments I’ve seen on stage.  A wise choice was made to omit an intermission that is written into the play at a key moment where Ada has completed a translation of a presentation Babbage made in Italy.  Ada is visiting Babbage, the two are alone.  She suggests that “Then… we should both be… quite satisfied with our selves. Our work. The paper. Which truly is the best of both of us. We have finally made manifest so many conversations. Our collective dream it seems is… real. We are, in this respect… complete.”  Almost unwilling to look at her, Babbage responds, “Complete”.  All seems fine in spite of the electricity between them until Babbage stands to wish her farewell.  When he takes her hand, Ms. Sherman and Mr. Knox are granted the space and time to let that contact develop into a near kiss the likes of which you have to see.  Her necessary rejection of not only his desires but her own ultimately leads to a fight over a forward Babbage insists must be added to the paper that Ada refuses.  The fight is just as electric as the spark of intimacy, with Ada shutting Babbage up with “I am speaking. You are brilliant but unpleasant. I am brilliant but unrecognized. I see only one solution to both save you from yourself, and me from mediocrity: We must continue to work together. Partners is what you said, and I agree.”.

One might say this is a spoiler alert from here on in. 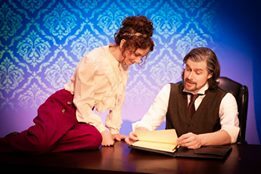 Unfortunately for all, Ada doesn’t have long for the same illness that took her father at a young age now promises to take hers as well.  Babbage’s reaction to this news is heartbreaking, as is nearly all that unfolds until Ada passes away and finds herself in a kind of heaven where her father is waiting for her.  Lord Byron (Casey Hunter) is probably as flighty and insufferable as Anabella described him to be but when he tells Ada he was always heading back to her, he just never found his way, it’s hard not to see that he’s telling his truth the best he can.  Though the play opens with Ada reading one of Byron’s poems and thus bookends with her talking with him in person, we have been so invested in Ada with the men who shared her life it seems we spend too much time with the only other man who influenced her in death.  Half of their conversation might have sufficed to get Ada to the point where she again recognizes the connection between music and math.  Earlier on she stated that “Music and mathematics share a language I find. Though I also find a kind of delicious magic in music. It’s the ability to transport one to a freest and full place of feeling with just a few bars. I will not deny that I live for the times when I am either at my desk in a study or at the keys in song. All else fades away. Freedom can look quite caged from the outside, but it’s really in the mind, don’t you think?” 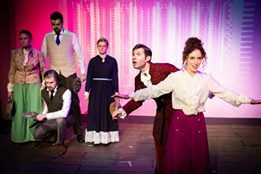 The music Ada finds as she imagines the Engine has been brought to life in her absence comes to being via a closing song where Byron’s poetry, Babbage’s ingenuity, and Ada’s artistic pulse come together in a kind of round.  The five actors minus Ms. Sherman emulate parts of the Engine via the use of props and choreography by Roger Fojas.  The choreography is used in several moments to illustrate what the Engines might be doing throughout the play and each instance, save one, adds to our understanding of what Babbage and Ada are accomplishing.  There’s a moment where Babbage likens the punch cards he intends to use to ones used in weaving and the four available actors illustrate an industrial loom with cloth and wooden sticks that feels more distracting than illuminating.

Some entrances and exits seem to flow unnaturally given the context of a given scene, with characters cutting across without clarity of where they are coming from or going to.  When Ada and Babbage reunite after a long absence at a Christmas party, the four actors upstage do not seem to fully notice or react to the two of them sitting closely together on the chaise lounge in pure delight of each other’s company.  There are also several beats where Ada leaps up to sit on Babbage’s desk that seem to clash with the notion that these two cannot get that close to each other never mind the notion of whether or not a woman would do such a thing in her time.  And finally, it is only at the end when the images of women working with computers since their invention (including a photo of Melba Roy, if not mistaken) that the projections really have a role to play that doesn’t merely threaten to distract us. 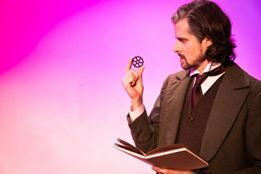 But overall these are elements that can easily be overlooked when weighed against what this production has to offer.  Ada was strong and loving and dedicated and oh so smart.  She was an artist and she was a scientist and though she never set out to be a pioneer, she set the stage for generations to follow her.    “You’re going to make this new engine”, she tells Babbage, “And neither of us can quantify its import when you do. And for two mathematicians that is certainly saying something.”

The production is stage managed by Tanya Nancy Telson.  Tom Moore is the Dramaturg. Music and lyrics by The Kilbanes.  Additional Musical Arrangements and Direction by Jennifer Lin.  Projection Animation by Kevin Hilton.  Rosie Byrne is the Dialect Coach.  The play runs 100 minutes without an intermission. Performances are Thursday 3/28 at 8 pm, Friday 3/29 at 8 pm, Saturday 3/30 at 2 pm and 8 pm and Sunday 3/31 at 7 pm.  studio/stage is located at 520 N. Western Ave., Los Angeles, CA9 90004.  Tickets are $20.  For more information: www.theatreunleashed.org 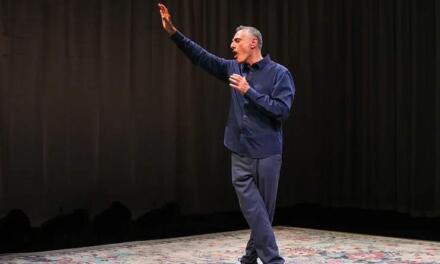