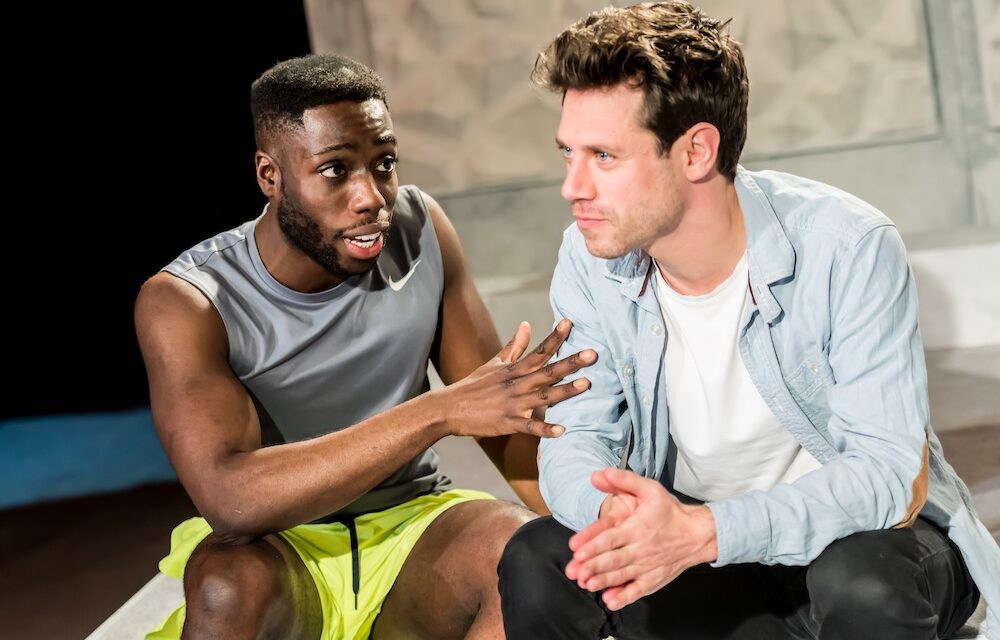 Joseph Rowe and Daniel Abelson in Circa Photo Lidia Crisafulli

There is a classic conflict in many gay plays: between characters who identify as gay (in the sense of conforming to the norms of straight society, such as marriage, monogamy, kids, and home-making) and characters who are queer (in the sense of sexual adventurers and social outlaws). The gays might dream of getting a puppy; the queers just want to party. In one central scene in Tom Ratcliffe’s clearly written play, which originally premiered in Amsterdam in early 2016 before coming to the Vaults as part of the Pride in London Festival in June that year, this conflict is clearly articulated. In it, the hero’s queer partner says: “I don’t care if I’m thirty and other guys my age now want to settle down because that’s what they perceive to be normal.”

Ratcliffe’s play has an ambitious span: it charts the sexual and emotional life of one person, simply called Man, from his teenage years to about his mid-forties. So it starts with a callow 17-year-old having an awkward encounter with a much older man, then shows him falling in love with men his own age, Liam and Eric, before experiencing an abusive encounter and then finally finding his partner, Ethan. Trouble is, Ethan doesn’t really want to settle down, doesn’t want to become a married man with kids. In fact, he suggests getting a dog as a substitute for babies! So the Man then tries to love a woman, but that doesn’t really work out; as he gets older, he tries sex with rent boys and then, in a final scene which mirrors the first one, he hooks up with a much younger man.

There is a fine elegance in the structure of this play, and the dialogues are clear and often humorous. However, with a sweep of some 30 years in about 105 minutes of running time, there is an inevitable compression about the storytelling. As is clear from his name, Man is a symbolic and representative figure, whose longings are generalized and not especially individual. Although this means that the play is able, in the words of the play text cover blurb, to explore “the blurred identity of the gay relationship in the modern age”, it is markedly less successful in giving a strong impression of individual subjectivity. Although the Man is on stage for all of the time, we can see some of his emotional states without finding much out about his personality. Which is odd, to say the least.

Given that the thesis of the play is about how confusing it is to be gay in the 21st century, what with gay marriage, the possibilities of parenthood and #LoveWins trending on Twitter, the strongest scene is the central one. As the Man argues about his relationship with his partner Ethan, the conflict between the security of monogamous parenthood and the thrills of sexual freedom is powerfully articulated. In Ethan’s words: “If I was meant to have kids and be a dad, I would be straight and like fucking girls.” But the directness of the writing also tends to skim over other aspects of Man’s identity, such as his work and opinions, which are surely just as interesting. And this is especially true in the later scenes after he breaks up with Ethan.

Andy Twyman’s production, for work. Theatre on Luke W Robson’s adaptable set, casts three different actors to play the Man at different stages of his life: Thomas Flynn (Young Man), Daniel Abelson (Man) and Antony Gabriel (Older Man). This works well and emphasizes the character’s representative rather than individual nature. Likewise, there is a fair amount of dramatic irony in having the same actor (Gabriel) playing the older man in the first scene and our hero in the final one, as well as a drunken encounter along the way. But the most dynamic scenes are those that feature Abelson and Joseph Rowe as Ethan. In these excellent exchanges, you can glimpse the seeds of a less ambitious but arguably better play which would have focused more tightly on one specific situation.

Circa means approximately, and its LGBTQ story presents a portrait of Man which is rather roughly sketched, giving the impression that he somehow represents many gay men today. But are most gay people really as confused as he is? Somehow, he is not at ease with himself or his sexuality, and that suggests that maybe, in Britain today, he is more of an exception than the rule. If so, then wouldn’t it have been better to write a story about someone who managed to tackle the new demands and opportunities available to gay people a bit more successfully than the Man? I think Circa would have been a stronger piece if it had shown us that gay people have as messed up a married life as straights. So, for that reason, perhaps this is a missed opportunity.

Circa is at the Old Red Lion Theatre until March 30.

This article appeared in Aleks Sierz on March 12, 2019, and has been reposted with permission.