"The Drowned Man." Photograph by BrinkhoffMögenburg.

We all probably agree that the theatre is by nature “immersive” and that–since the days of the dithyrambs sung and danced in honor of Dionysus–the involvement of the spectator is one of its main purposes.

However, in the last decade, and particularly in England, the Immersive Theatre has become an effective theatrical genre. The spectator’s interactivity and participation, the use of technological and digital devices, the preference for unconventional spaces as well as the simultaneity of the scenes and therefore the disinterestedness in the philological interpretation of the dramatic text, are some of the main characteristics of this new theatrical art form. Its roots could be identified in the Environmental Theatre and in the more recent Site-Specific Theatre, up to Punchdrunk, the internationally recognized English group which has contributed in an incisive way to the development of this new theatrical genre.

The term punch-drunk in English indicates the stunning state of the boxer after a particularly bloody encounter, the same effect that the London group aims to arouse in the spectator.

In fact, this latter represents the center of Punchdrunk’s artistic activity; each performance is created with the aim of surprising and physically involving the spectator in a surreal dimension by giving her the freedom to move into the space and to attend to the scenes she prefers the most.

However, the centrality of the spectator could raise some objections; this “productive participation” could in fact transform her into a sort of prosumer (the term, coined by the sociologist Alvin Toffler, is the combination of “consumer” and “producer”), thus favoring a narcissistic aesthetic approach, a sort of voracity of feelings: the desire to experience unique and intense emotions could overshadow the importance of the performance experience itself.

In an attempt to clarify some of these points and to understand some other general aspects of the Immersive Theatre, we asked Punchdrunk to answer some questions about their artistic research and the spectator’s role. 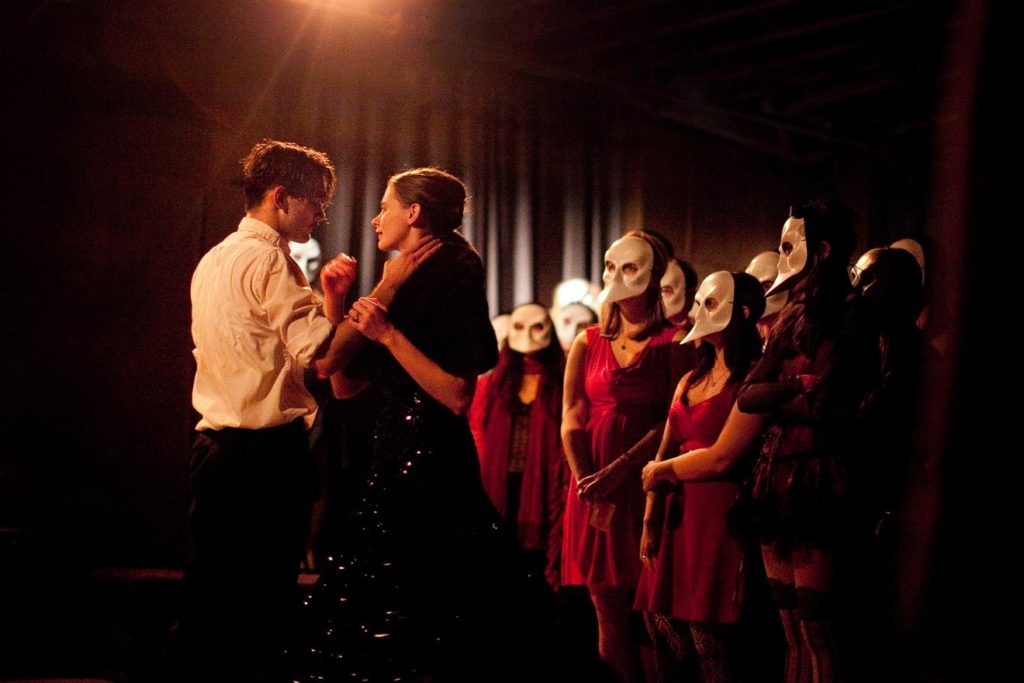 M. Borriello: Alongside more conventional theatre venues, your productions have taken place inside disused places, abandoned warehouses, festivals, deserted factories, and underground tunnels. The staging of classic texts within these environments shows similarities with the Environmental Theatre of 1960. Nevertheless, Punchdrunk’s theatre is focused on synesthetic and immersive experiences with the aim of making the audience the epicenter of the work. As you have stated, a central feature of your productions is the “empowerment of the audience.” Could you explain what this expression exactly means for you and talk briefly about your position with regard to theatrical forms based on a distinction between stage and auditorium?

Punchdrunk: Whilst Punchdrunk has been inspired by Environmental Theatre, we want to generate a raw and physical response in audiences with our own unique approach. We want both mind and body to be fully present in a way which is antithetical to conventional theatre. For theatre to make an impact, audiences must be at the heart of a narrative and have agency over what they experience.

M. Borriello: By definition, Immersive Theatre goes beyond the aesthetic experience of the visual. Punchdrunk’s performances, such as Sleep No More (2003, 2011, 2016), are simultaneous theatrical actions usually staged in places that can be as large as a five-story industrial warehouse. This non-traditional setting allows audience members to roam freely through the performance space and plot their own ambulatory paths and story. Such a “productive participation” implies a non-linear and fragmented approach to your performances, which are usually based on meaty and inherently complex texts, such as Shakespeare, Edgar Allan Poe, and Goethe, with references to Hitchcock and Kubrick. From this perspective, one would assume that the audience’s extended agency and freedom risk overshadowing the narrative and the beauty of the theatrical sources you choose. What is your opinion on this issue?

Punchdrunk: Every experience that an audience member has during one of our shows is valid. During our productions, audience members only experience a non-linear narrative if they follow the architecture of the space. If they follow a performer, then the story being told is done so in a linear fashion. We offer audiences the chance to find their own coherence within the form: they can decide whether they want an episodic experience or something more dreamlike.

Our experiences are richly layered: our use of sound, smell and even temperature all add to the narrative of a piece. Whilst we take inspiration from a variety of sources, we leave it to our audiences to decide what they want to engage with.

M. Borriello: The audience’s “productive engagement” in your productions could recall neoliberalism’s political and economic structures: the more productive you are, the more you “gain” from the performance. “Taking your own path” allows not only experiencing scenes the way you prefer but also “gaining” or discovering some other aspects and situations that are not generally accessible to everybody, such as intimate theatrical encounters with a performer. Some spectators, for example, seek user-guides, bloggers, and useful tips in order to take the best advantage of the performance. From this perspective, the audience member seems more like a “prosumer.” Does this desire for a singular experience and audience members’ self-preoccupation with their reception encourage a narcissistic spectatorship?

Punchdrunk: Whilst conventional theatre offers a democratic experience, we do encourage audience members to make their own decisions during our productions.

However, there is a strong and active community that exists around our work. We deliberately provide communal spaces, such as the Manderley Bar in Sleep No More, to enable people to re-engage with their party either during or after the show, to swap stories and experiences. We take the level of interest in our work as a huge compliment, and whilst some audience members do share secrets about the show online, the majority are mindful of others and want to preserve the magic.

M. Borriello: In your performances, audience members are required to wear a white mask at all times. This recurring feature encourages them to have the freedom to act differently from who they are in day-to-day life. In other words, it at once allows for anonymity, liberation, and a sense of “role-play.” However, the use of masks seems to impose uniformity onto the audience as well, restoring a certain hierarchical relationship between performers and spectators (a condition that the Environmental Theatre, according to Richard Schechner, had to obliterate). Indeed, the homogenization of the spectator’s identity makes him/her easily recognizable and thus manipulable by the performers. Could you explain how you came up with the idea of the mask and say whether it allows you to set limits on the audience extended agency and freedom?

Punchdrunk: Not all Punchdrunk productions use masks. When they are used (for shows such as Sleep No More in New York and Shanghai), they offer both anonymity and empowerment. We want to keep audience members to feel as safe and secure as if they were seated in a traditional theatre, whilst allowing them to be mobile and giving them an element of choice. This would not be possible unless we empowered our performers. Our audiences remain voyeurs; they cannot manipulate the trajectory of the show.

M. Borriello: The term immersive, which was brought into theatre at the beginning of this century, comes from the world of computer technology or, better, from its capacity to allow the immersion of a subject in a virtual digital world. In Believe Your Eyes (2016), you pushed further the line between virtual and real, by employing the advanced technology of Samsung Gear VR and involving a real actress. Could you talk about this experimental work and explain its relationship with your previous performances?

Punchdrunk: The crossover between the real world and the digital is something that really excites us, and we’re interested in the possibilities that VR can bring to our work.

We developed Believe Your Eyes in partnership with Samsung Electronics America. At the time we felt there weren’t many VR experiences that made an emotional impact on the user. That’s why we mixed it with real, physical interaction: we’re interested in the digital liminal space and the question of who the true performer is. Is it the person watching/listening, or the one who has physical contact with you?

M. Borriello: According to the French playwright Tristan Bernard, “in the theatre audiences want to be surprised, but by things that they expect.” This statement seems incompatible with your productions since your audience is constantly stimulated in different ways. In Kabeiroi (2017), for example, one of your last productions, based on fragments of a lost play by Aeschylus and designed for an audience of two, you challenged further your spectators to a six-hour performance-tour across London. However, also in Immersive Theatre, some strategies could become predictable and hackneyed, turning the excited and enthusiastic spectator into a passive and bored one. In Kabeiroi, and generally in your work, how do you avoid this risk without falling into the trap of excitement at all cost?

Punchdrunk: We have a responsibility to create theatre that empowers audiences, boosting adrenaline and sensory exposure. Predictability is the antidote to that. We’re always exploring ways to pull the rug out from under audiences and to do the opposite of what they expect: that way, we have a better chance of transporting them to a dreamlike state. Punchdrunk productions are about a state of being, not a format. We’re not reinventing; we’re developing further experiments around how you pull audience members deeper inside a narrative.

The Drowned Man. Photo by BrinkhoffMögenburg.

Published previously in Italian in Alfabeta2 on April 8, 2018. Reposted with permission of the author.