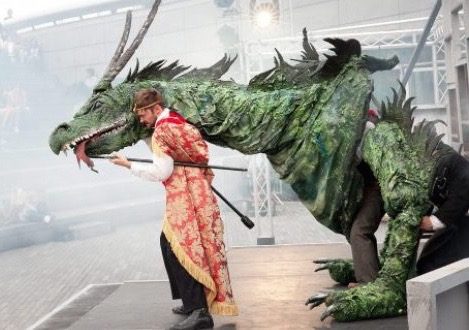 The theatre company Gods and Monsters and directors Nastazja Domaradzka and Phil Willmott have adopted the Polish story The Wawel Dragon: the story of a people fighting the legendary monster by the Wawel Castle – one of Poland’s foremost tourist attractions.

The story goes thus: Princess Wanda inherits the throne over the Wawel kingdom from her childless uncle. This scares a great part of the court as she has the power to freeze people – but only when she’s got hay fever and sneezes, she reassures them. For the same reason, she was isolated and raised as a shepherdess as a child. But to ensure an heir to the throne, her servants insist she has to choose a husband. Wanda resists at first but then gives in to see a select list of candidates. Well, not that select: the first suitor is a narcissistic, aggressive prince who promises to skin all the peasants when he’s king – ordering, until then, his wolf-servant to kill any competition. More amusingly, his first line in any conversation is “Would you like to see me in profile?” – in Johnny Bravo style.

The second candidate’s a sweet and slightly awkward boy who likes to walk in the forest and falls for Clara, Princess Wanda’s servant. The third is Clara’s brother, a chaotic young man who works as a servant himself but spends his free time inventing machines that drive the people around him crazy (inevitably one of his inventions will prove essential in the fight against the dragon). He is, however, an optimist, which his sister defines as someone who sees the best in people.

Princess Wanda judges the suitors based on a challenge – who can melt her icy heart, passed down through generations. Alongside this, the people of Wawel Castle must wrestle with the red, snaky beast of the title.

The one-hour play is entertaining, full of wit and surprising twists. It will also teach your kids a few lessons you may want them to learn. They range from political messages – that women and men are equal, or that social class can be transcended and shouldn’t dictate human interactions – to personal lessons which encourage children to believe the best of people, not to judge too harshly and to follow one’s passions and feelings.

The very fact a Polish fairytale adapted and acted in central London – in a public space for free – is amazing, even essential in post-Brexit London. The choice of a free public space makes for a diverse audience of both adults and children – a bravo to Gods and Monsters for having persisted in organizing their performances for the past eleven years as part of London’s Free Open-Air Theatre Season.

The play, however, doesn’t feel foreign at all. With references to Frozen and the actors’ English accents, it feels as if it were fully made in England. The medieval costumes and set too could serve any fairytale. The only clue to the tale’s Polishness comes from some of the characters’ names and the big celebratory polka dance at the end.

The costumes and the stage set aren’t particularly creative but, given that the play’s only funded by previous year’s audience-donations, this can easily be forgiven. You will definitely have a lot to laugh at and talk about with your children – or friends – if you’re happy to unleash your inner child yourself.

This article originally appeared in Central and Eastern European London Review on September 20th, 2016 and has been reposted with permission.