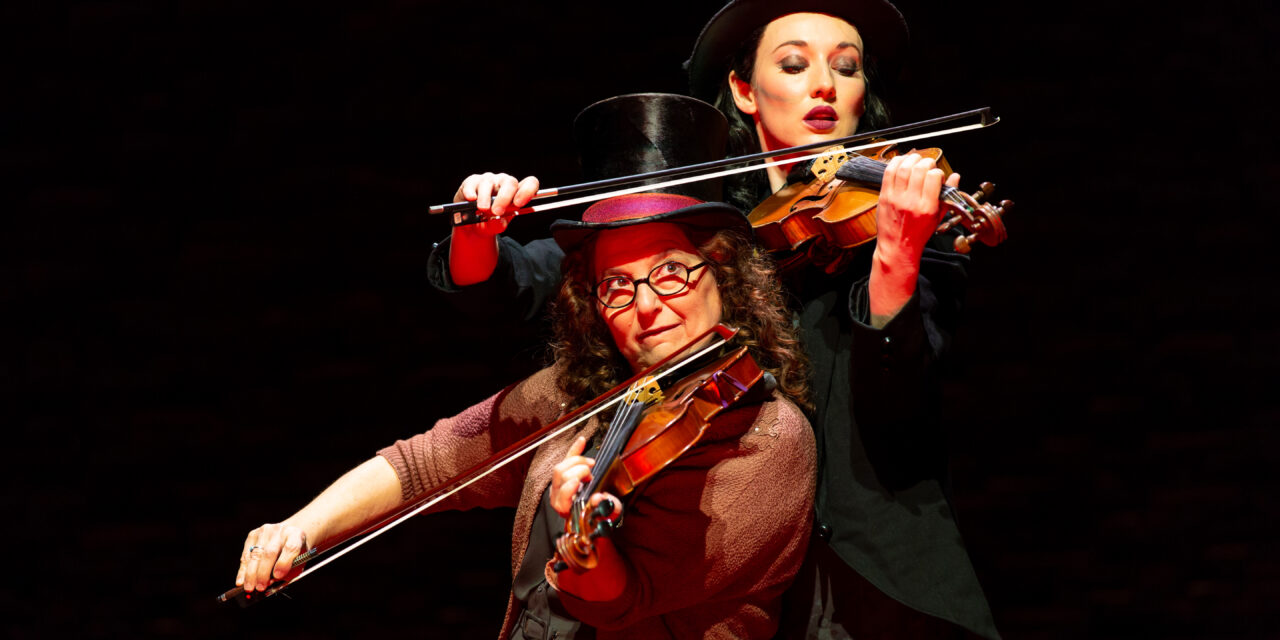 Lisa Gutkin and Elizabeth A. Davis in the Huntington Theatre Company's production of Indecent, playing April 26 - May 25, 2019 at the Avenue of the Arts / Huntington Avenue Theatre. © Photo: T. Charles Erickson

The Huntington Theatre Company has given the city of Boston a priceless gift by remounting the shortly-lived Broadway production of Indecent by Pulitzer-prize winning dramatist Paula Vogel. Much of the design, acting, music, and direction have been directly transported to the Huntington Theatre, enabling audiences to witness a truly special performance that ought to be seen by all those who love history, romance, music, and the history of the theatre. Vogel’s beautiful play brings to the stage the life and story of the play God of Vengeance written by one of the founding fathers of Yiddish literature, Sholem Asch. Featuring the first kiss between two women on a Broadway stage, the play was cited for obscenity. Its company was also found guilty for a work of “indecent, immoral, and impure material.”

Despite the scandal the play caused, Vogel and her director/collaborator Rebecca Taichman, who won a Tony Award for her direction of Indecent in its Broadway run, choose not to fixate on the trial, but everything that circulated around it: themes of migration, translation, alienation, sexual and national identity. As a play about a play, Indecent also speaks to the power of tradition. How can the theatre create a lineage of tradition? How can it act as a persistent force, keeping language, ideas, and people alive?

Vogel’s play tells the story of a company of actors living in the world through a play and how a community acts and reacts to its challenges. From the inception of God of Vengeance, Asch was told by Yiddish literati to “burn” the manuscript. Its very trial in New York City was spurred on by Jewish leaders who feared the play threatened their very integration into a country where antisemitism was on the rise. Nonetheless, the play persisted. Before and after the trial in New York, the company toured the play around Europe and even performed it in the tightly restrictive Polish ghettos.

The play interweaves between musical performances and dramatic action as it spans a timeframe of fifty years. It offers a kaleidoscope of characters, music, theatre, and action. Other than Richard Topol, who delivers a powerful performance as the Lemml, the Stage Manager, the cast plays multiple characters: sometimes actors in God of Vengeance, sometimes the very figures who seek the censure the play. Other moments, they turn into German cabaret singers or Catskill crooners. As such, we feel as if we’ve lived a lifetime with the play and feel Asch’s tired surrender in his old age when he tells a young director to burn the manuscript. The play lives on, long after Asch had given up on it.

What Vogel manages to create is a transhistorical and transcultural history of Yiddish theatre in the twentieth century. As such, a big part of her play is language. How do barriers between Yiddish, German, and English affect the translation of the play? In fact, the play was only performed in English on Broadway, with severe cuts that altered the content significantly. It is only through Vogel’s citation and re-presentation of the play’s most romantic scene, an embrace from the two women in the rain, that God of Vengeance gets to live on stage in its original tongue. Vogel carefully prepares the audience for this moment so that when we finally hear the Yiddish, we finally understand the rhapsodic beauty that made the play so vital, so transcendent to its original audiences.

In the program note from the playwright, Vogel writes that she believes theatre ought to “wound our memory so we can remember.” The production does so through dozens of poetic stage images. At the beginning of the play, the stage manager introduces us to the play’s characters, dust pouring from their sleeves as they gesticulate. Later, a projection of the text from the penal trial paint the cast. We see the lovers embrace as the rain bathes them in a blue, misty light. Eugene O’Neil calls them a “lighthouse” amidst a fog of despair.

Her play scars the psyche, not only reviving a long-lost play but insisting that its lessons have not abated. Arguably, Indecent is as vital and current as ever. Amidst ever-rising hate, anti-semitism, and violent nationalism, Vogel’s play serves as a warning. Using lesbian love at the center of God of Vengeance as a beacon of hope in hopeless times, it argues for the rejuvenating power of the theatre. Yet it also reminds of the forces that wish to stifle difference, culture and the images that engender both.