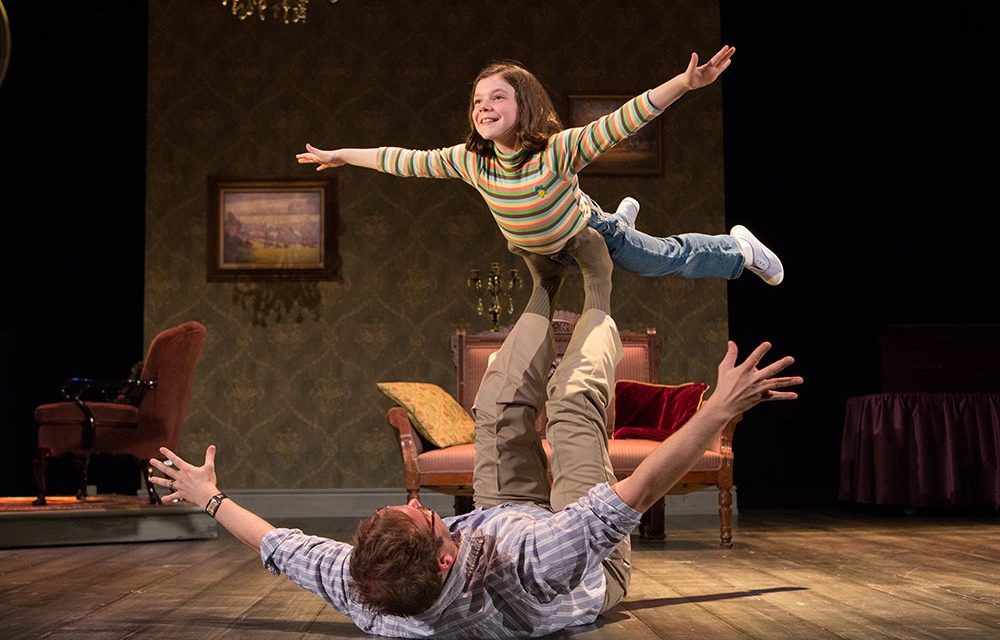 I must admit that I knew nothing about Fun Home, so I had to do some online research, scan the Mirvish press release, and read the program. Based on the graphic memoir by Alison Bechdel, Fun Home is the recipient of several awards including 5 New York Tony Awards (Best Musical in 2015). In 2006, The New York Times named Fun Home: A Family Tragicomic as one of the best books of the year. It was created from memories of Ms. Bechdel’s childhood and the detailed journals she kept since age 10 growing up in rural Pennsylvania before and after her father’s suicide.

We see Alison at three distinct stages in her life throughout this production. In the present, she is 43 years of age, a lesbian cartoonist, and struggles to understand the complex relationship she had with her deceased father. Alison grew up in a funeral home while trying to deal with her sexual awakening, and with the secrets her father faced before his death. 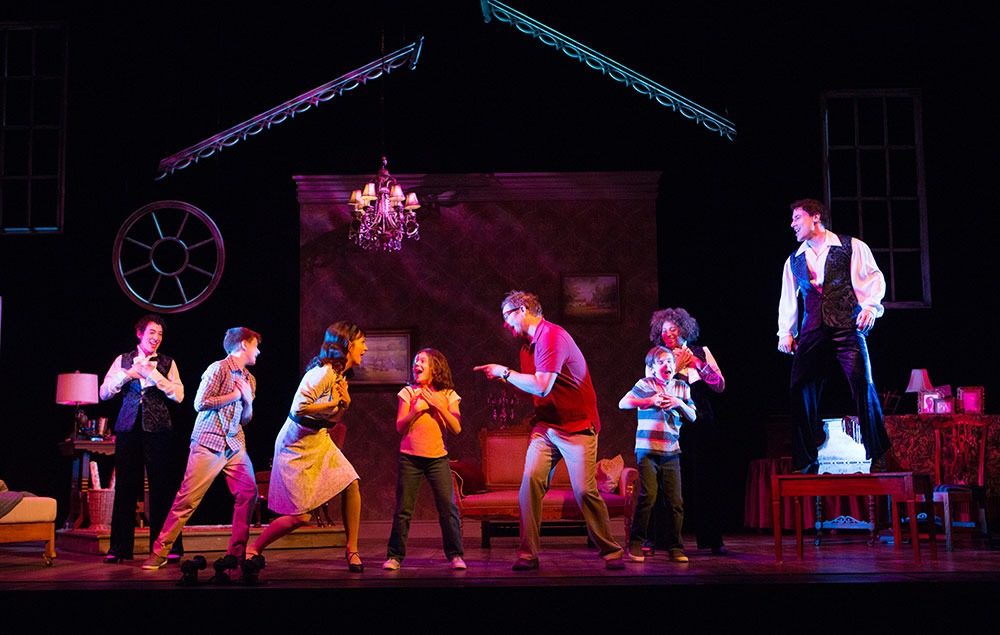 The cast of Fun Home. Photo by Cylla von Tiedemann 2018

Given this synopsis, I was curious to see how The Musical Stage Company was going to handle this delicate subject matter.

Director Robert McQueen handles and treats this story and its characters with utmost dignity. He lovingly respects these real, flesh and blood people and wants us to focus our attention on them. Camellia Koo’s set design artfully hints how the Bechdel house appears to be a museum piece through appropriate furniture used in what would have been found in funeral homes.

Rebecca Picherack’s lighting design finely accentuates the varying degrees of warm intimacy in each scene whether between Medium Alison and her growing attraction for Joan or those rare family moments where the young Alison wants to play airplane with her father.

Along with director McQueen’s empathetic vision of the story, the superlative vocal work of the cast with Music Director Reza Jacobs remains one of the high points of opening night.  As Alison’s mother, Helen Bechdel, Cynthia Dale broke my heart several times. Helen is a troubled woman who is keenly aware of her husband’s secret life and feels powerless in railing against it. Ms. Dale captures this turmoil with powerful intensity. Her solo number Days And Days is a tour de force that brought tears to my eyes.

Like Ms. Dale, Evan Buliung matches that focus in the intensity of turmoil as Alison’s father, Bruce Bechdel.  At one point, he is a father who loves his child and is in synchronicity with her as they play airplane. Conversely, he is also a man plagued with the demons from his past and present. Bruce recklessly leaves his children alone at night on a trip to New York City while he is out cruising. Although I was aware of the tragedy that will take place at the end of the performance, his Edges Of The World is gripping until the horrible events unfold.

Jasper Lincoln and Liam MacDonald are delightful as Alison’s brothers Christian and John Bechdel. Their rendition of an imaginary advertisement for their family funeral home Come To The Fun Home drew rousing applause from the audience. Eric Morin convincingly plays a few smaller roles of young men who sadly lead Bruce Bechdel on his sad road to eventual destruction. Sabryn Rock is confident and dynamic as Joan, Alison’s eventual lover from college. One quibble that I have with the script, and not Ms. Rock’s performance, occurs near the end of the play. No mention is made of Joan as Alison remembers her past while trying to draw a perfect balance. Wasn’t Joan in some way part of this balance of life’s events?

Hannah Levinson (Small Alison), Sara Farb (Medium Alison) and Laura Condlln (Alison) are outstanding and impressive in their performances of the complex nature of the central character.  Ms. Levinson sweetly stole my heart many times as the small Alison. Ms. Farb energetically captures the growing passion and awakening of Alison through her path to adulthood and her sexuality. Ms. Condlln commands the stage in those silent moments where we see the adult Alison looking back on her childhood sometimes with amusement and many times with regret. 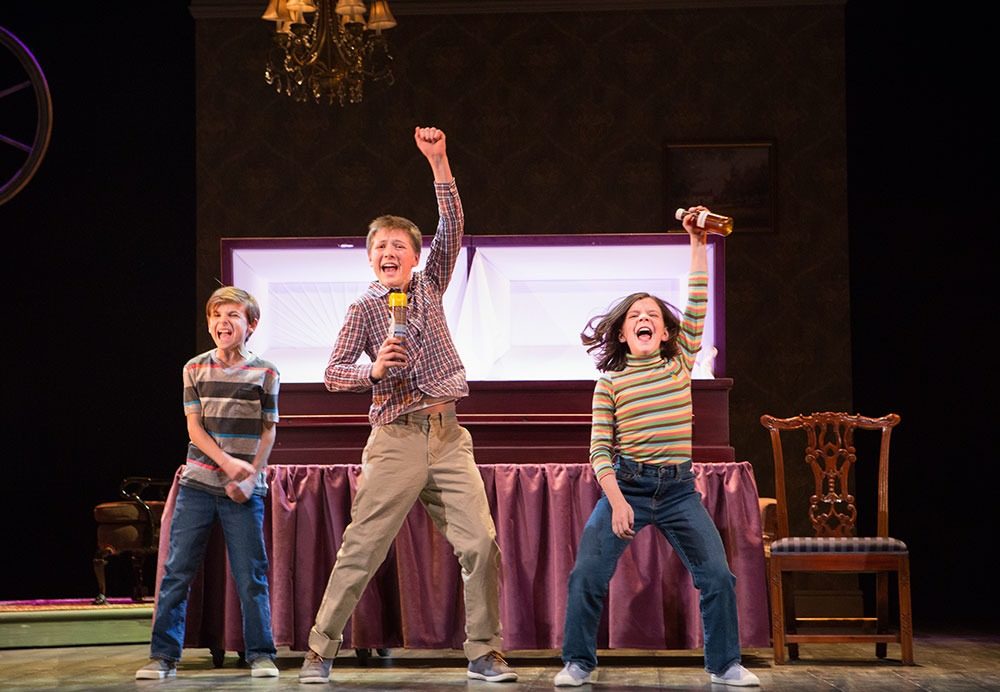 Since I knew nothing about this Tony award winning play for Best Musical, the title Fun Home is a tad perplexing. This is a story that most certainly was not a fun one where Alison and her brothers could grow up in a loving household.

Personally, this Fun Home accomplished what it set out to do. 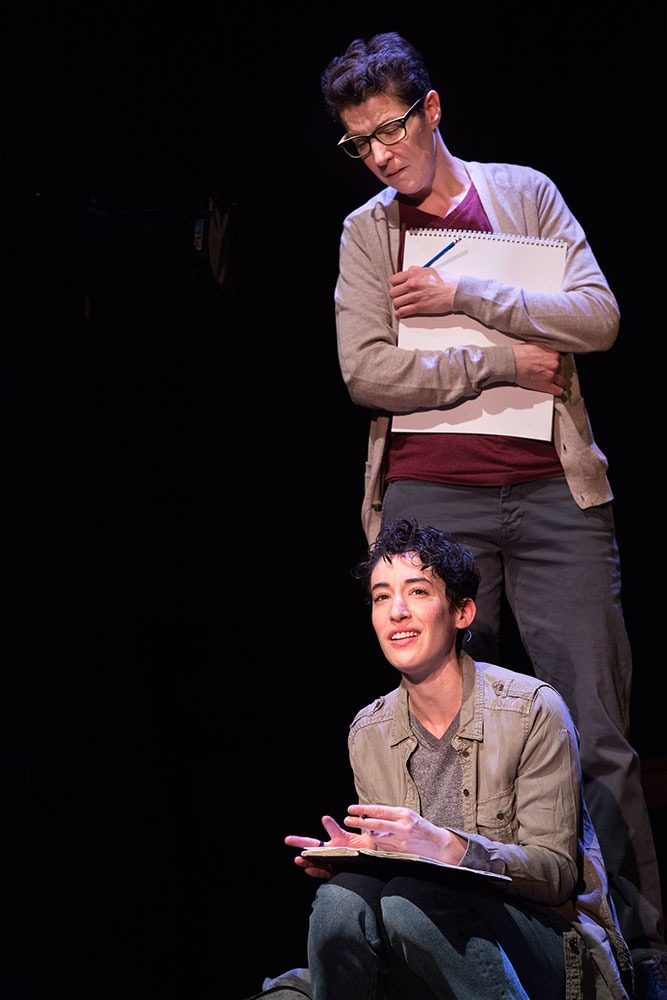 This article originally appeared in On Stage Blog on April 18, 2018, and has been republished with permission. 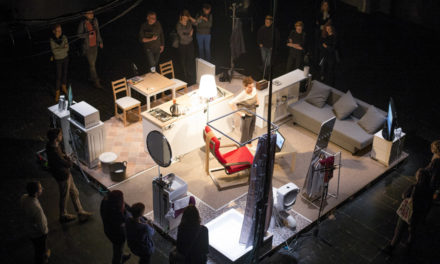