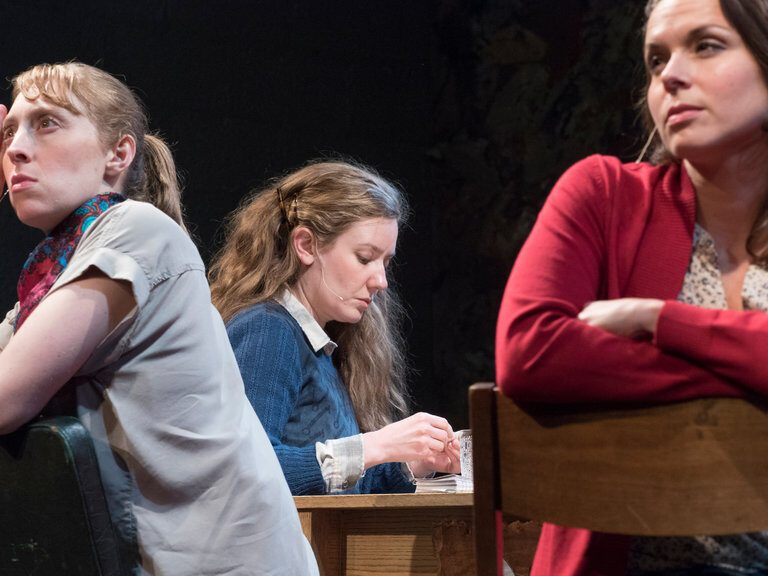 Trauma affects everyone differently. Survivors may become fragile or embittered, depressed or volatile or callused or numb. They may show no outward sign of inner injury at all. National trauma presents a special challenge because despite the incalculable diversity of responses to a country’s collective nightmare, the state has a responsibility to memorialize painful events of the past in a way that honors the experiences of all of its citizens. Should a monument to atrocity conserve or replicate a disturbing historical site? Should it create an emotional experience or an intellectual one for visitors? To what extent should the wishes of those directly impacted by the event in question be taken into account? Finally, is art an appropriate way to help a people work through feelings of loss, rage, and despair?

These are just a few of the questions that are fiercely debated by three young women named Alejandra in Guillermo Calderón’s Villa, this prodigiously brilliant Chilean playwright and director’s scalding reckoning with the legacy of the infamous Villa Grimaldi in Santiago. Under the dictatorial Pinochet regime, the Villa was one of many sites the military used as detention and torture centers, this one distinguished by the unusually sadistic sexual torments to which female leftists were subjected. Michelle Bachelet, Chile’s first female president, was an inmate there in 1975.

In Calderón’s play the tidy sum of twenty-six million euro has been made available for the Villa’s board of directors to put towards a fitting and proper memorial. The problem is that no one can agree on what qualifies as fitting or proper under these sordid circumstances. The last meeting to discuss it ended with one board member throwing an ashtray at another’s head. So now a “special committee” of the three Alejandras has been summoned to settle the matter. We don’t learn until late in the play that all three of them were conceived in the Villa, where their mothers were raped by guards while being held as political prisoners.

Despite (or because of) their proximity to the crimes the Villa accommodated, the women don’t have any easier a time deciding what to do with the site than the board did. The first option discussed is a meticulously reconstructed “house of horrors,” the second a beautiful contemporary art museum where visitors would confront the events of the past via installations and testimonials, mixing abstraction with visceral impact. While wary of turning the Villa into a fake-feeling Disneyland of defilement, the Alejandras are also circumspect about “emprettifying” the site too much. Isn’t that what all art ultimately does, they wonder? Prettify? The presence of art, one Alejandra argues, encourages people to believe that “in the end beauty triumphed, the human spirit triumphed, peace triumphed…when actually, the truth is there is no salvation here or anything: women die here, raped and covered in dog shit.”

As a work of art and a memorial to a tragedy in its own right, Villa holds out no such empty promises of redemption. Unless, as one could argue, it does so simply by virtue of existing. Calderón does not distill from accounts of the Pinochet-era barbarism uplifting stories about resilience or rebirth or forgiveness. One of the Alejandras has been considering plastic surgery. She looks just like her father. Her mother can’t bear to look her in the face.

The trio finally decides that the site should be razed and replaced by an empty field of grass. People can come and stand there to remember or imagine. They can sit with their friends and picnic and play the guitar. They can run through the field with their arms spread wide, screaming at the top of their lungs. Everyone reacts differently, and so the memorial will be nothing and everything, a blank canvas for singular experiences, a place not entirely unlike the theater at its best where the incommunicable can be communicated, where the loneliness of grief can be shared.

Written and directed by Guillermo Calderón

Presented by the Play Company