Theaters In Japan Are Looking At Longer Runs For Their Productions 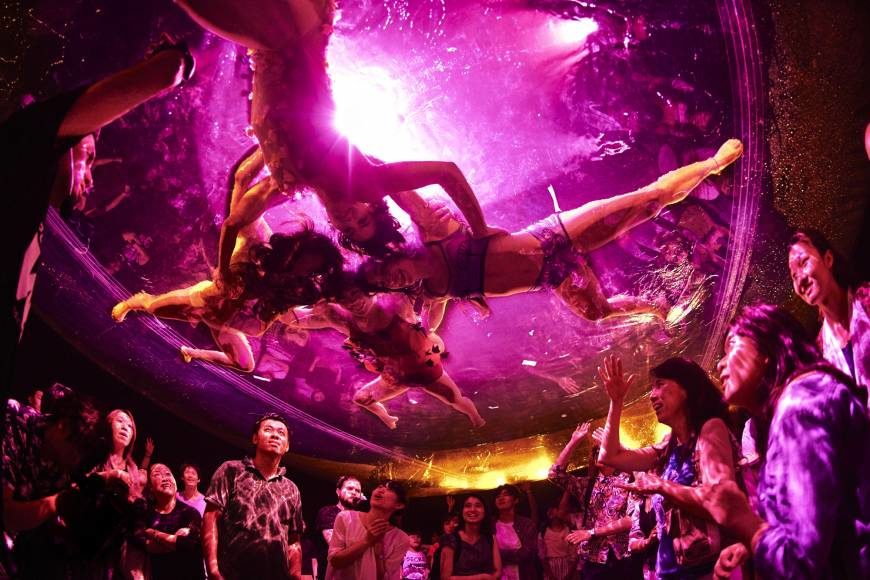 In it for the long haul: Productions such as "Fuerza Bruta Wa!" are extending their runs in an effort to attract overseas tourists. Photo: Keiko Tanabe

As I turned the pages of a free magazine in London this summer, a picture of a beaming woman clutching a signed CD and program for the West End musical Kinky Boots caught my eye. She was a 27-year-old named Emily who’d seen the show 199 times in the past two years without ever being the least bit bored.

In London, of course, that kind of devotion is nothing new, what with the hit musical Les Miserables still running after almost 32 years.

In stark contrast, it’s rare for a show in Japan to run for even a month — a week or two is the norm here. Virtually the only exception is a local version of the musical The Lion King, which Shiki Theatre Company has staged at its own Tokyo theater for 19 years.

Despite this state of affairs, several producers have lately begun overturning a penchant for short runs that fundamentally serves major financiers’ aversion to risk.

First, broadcaster TBS is underwriting a long-run project titled Seven Souls in the Skull Castle at the new IHI Stage Around Tokyo.

Although the show opened March 30 and the theatre is out by Tokyo Bay, the fact that tickets are still selling like hotcakes is a testament to the fresh business thinking involved — in particular, the decision to vary the direction and replace the leading actors every three months to encourage audiences to return for comparison.

When I spoke to director Hidenori Inoue before the Seven Souls premiere, he pointed out that “in Japan, many people just go to the theatre to see their favourite actors, rather than particular programs. There’s also a fickleness in their nature, so they prefer new things.”

Meanwhile, two other productions that opened this year are furthering this trend toward long runs: the samurai entertainment show Alata; and Fuerza Bruta Wa!, a made-for-Japan version of the global physical entertainment hit Fuerza Bruta (Brute Force). In both cases, the keywords are “nonverbal” and “audience turnover.”

For instance, their backers reasoned that by staging shows in hub sites — and, crucially, by making them words-free — they could tap into Japan’s fast-growing number of overseas visitors as well as appeal to younger locals more accustomed to visuals than verbiage.

Commenting on this trend, Amuse Inc.’s Kiyoshi Tatsumi, the producer of Fuerza Bruta Wa!, said, “it’s difficult to lure visitors into theaters because, unlike attractions such as museums and amusement parks, the times are fixed and that takes more planning.”

“Consequently,” he explained, “we chose a venue in a hotel in the busy transport hub of Shinagawa that ensures easy access for foreign tourists and a similar synergy to Broadway or Las Vegas.”

Similarly, Alata producer Kazutoshi Tanuma opted for the glitzy central shopping and dining district of Ginza to host his show since people can easily take in a show there to top off their evenings.

Whether or not today’s three pioneering projects will succeed — and whether their influence spreads so people in Tokyo may one day, like Emily in the West End, be able to return countless times to see regular plays or musicals as well — only time will tell. For now, though, this is an opportunity to welcome lots of visitors and give them a taste of Japan’s exciting and diverse performing arts scene.

This post originally appeared in The Japan Times on September 21, 2017 and has been reposted with permission.