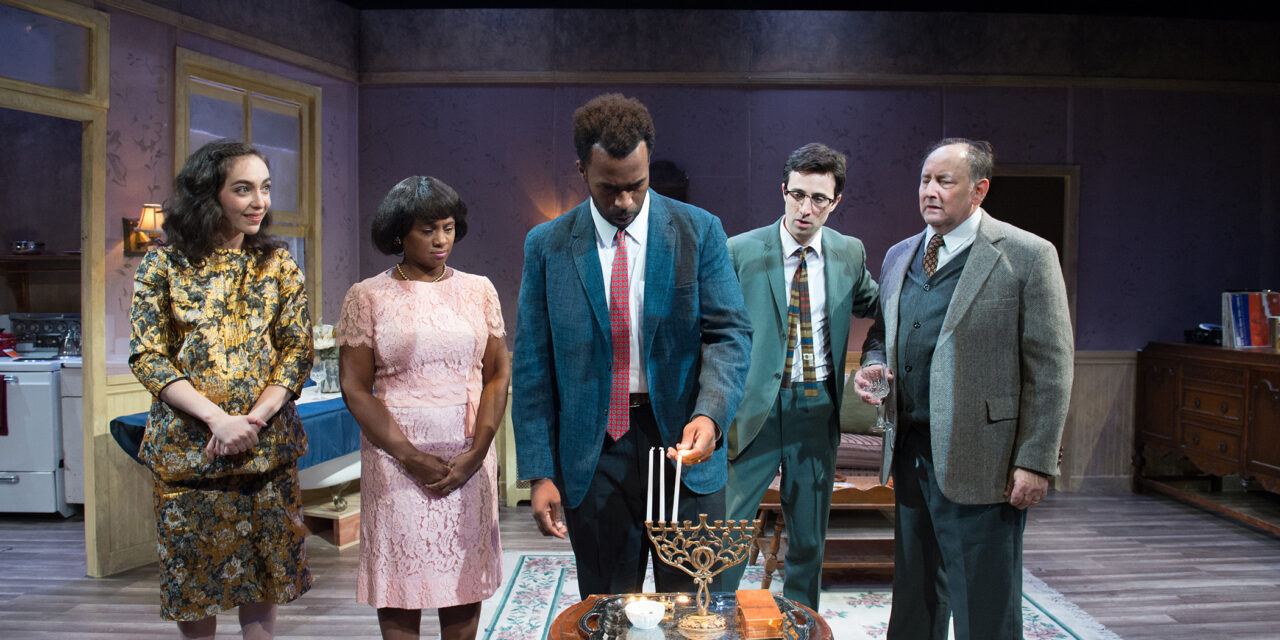 “We are moving in the right direction, we cannot go back – There won’t be more camps, more carnage.  We are too aware.  Now.  And we will fight.” – Erich Blum, Eight Nights

Antaeus Theatre Company in Glendale, CA has been instrumental in bringing a new play to life that is a deeply moving story about a Holocaust survivor set during eight different nights of Chanukah over the course of eight decades.  Written by Jennifer Maisel and directed by Emily Chase, Eight Nights was developed in the Antaeus Playwrights Lab and was a semi-finalist for the O’Neill National Playwrights Conference.  In addition to the production now up in Glendale, the play inspired a series of benefit staged readings in cities across the US called The 8 Nights of Eight Nights series after the Tree of Life Synagogue shooting in Pittsburgh with proceeds going to the Hebrew Immigrant Aid Society (an organization dedicated to assisting refugees worldwide).  This is the second full production of a play developed through Antaeus’ lab. 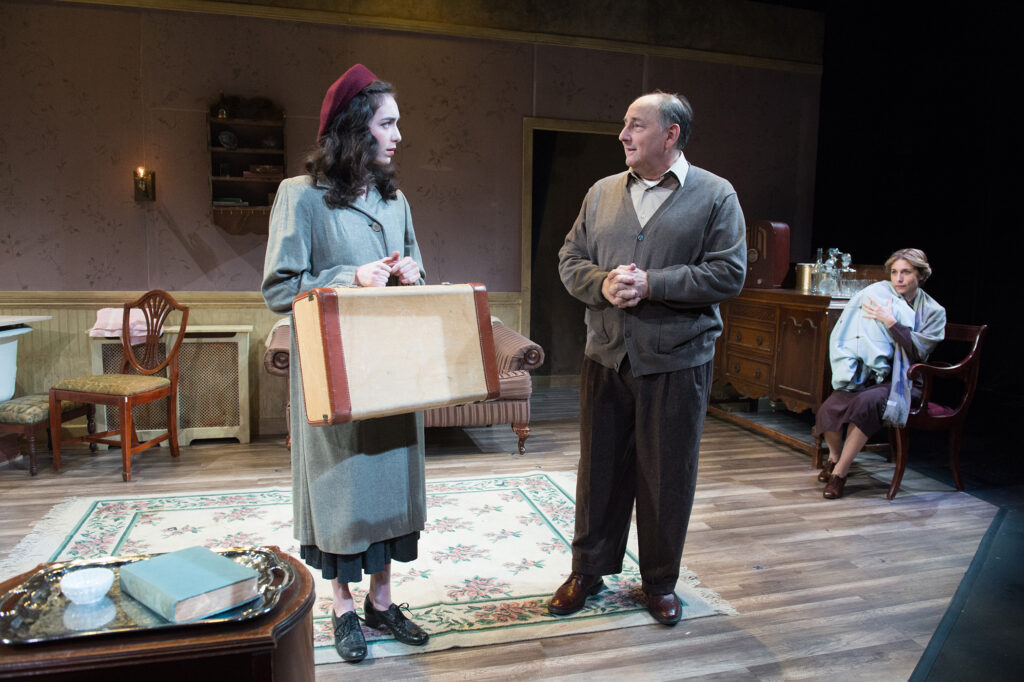 With a cast of seven mesmerizing actors taking on different roles throughout the timeline, the play opens with the arrival of 19-year old Rebecca Blum to her father’s apartment on the Lower East Side of Manhattan on December 15, 1949.  Zoe Yale is stunning as Younger Rebecca Blum and she looks fearful of everything no matter how hard her father Erich Blum (Arye Gross) tries to soothe her.  A knock on the door sends her diving behind the arm of a sofa and tells us almost everything we need to know about all she has experienced in Auschwitz and Dachau (as the play proves over time, there is more she isn’t telling).  Erich’s wife, Rebecca’s mother, Anna Blum (Tessa Auberjonois) sits in silence, holding a child wrapped in a blanket.  She watches Erich as he tries to calm and welcome his long-lost daughter.  Erich explains Mr. Szotzki took him in and all but gave him this apartment for him and Rebecca with no deposit.  Both were refugees, both lost family and both, Erich goes on to say, cried that moment.

Aaron (Josh Zuckerman) arrives with the gift of dinner from his mother, Mrs. Szotzki, and the moment he lays eyes on Rebecca, you can palpably feel the effect she has on him.  Zuckerman is as charming to watch as Yale is compelling and the two have instant chemistry that makes you want to root for them right away.  Arye Gross shows us again just why and how much we should be thankful to have him in our local theatre scene in these initial moments for Rebecca does not speak and it is up to Erich to help us gain a foothold in the world of the play.  We do not immediately understand that Anna is a ghost for she is seated in a chair watching young Rebecca’s back for so long, we might have taken her for a slightly put out if not disgruntled the second wife, but over time several characters take on the role of the spectral reminder in a character’s life in understated ways that ultimately work even if this initial understanding eludes us. 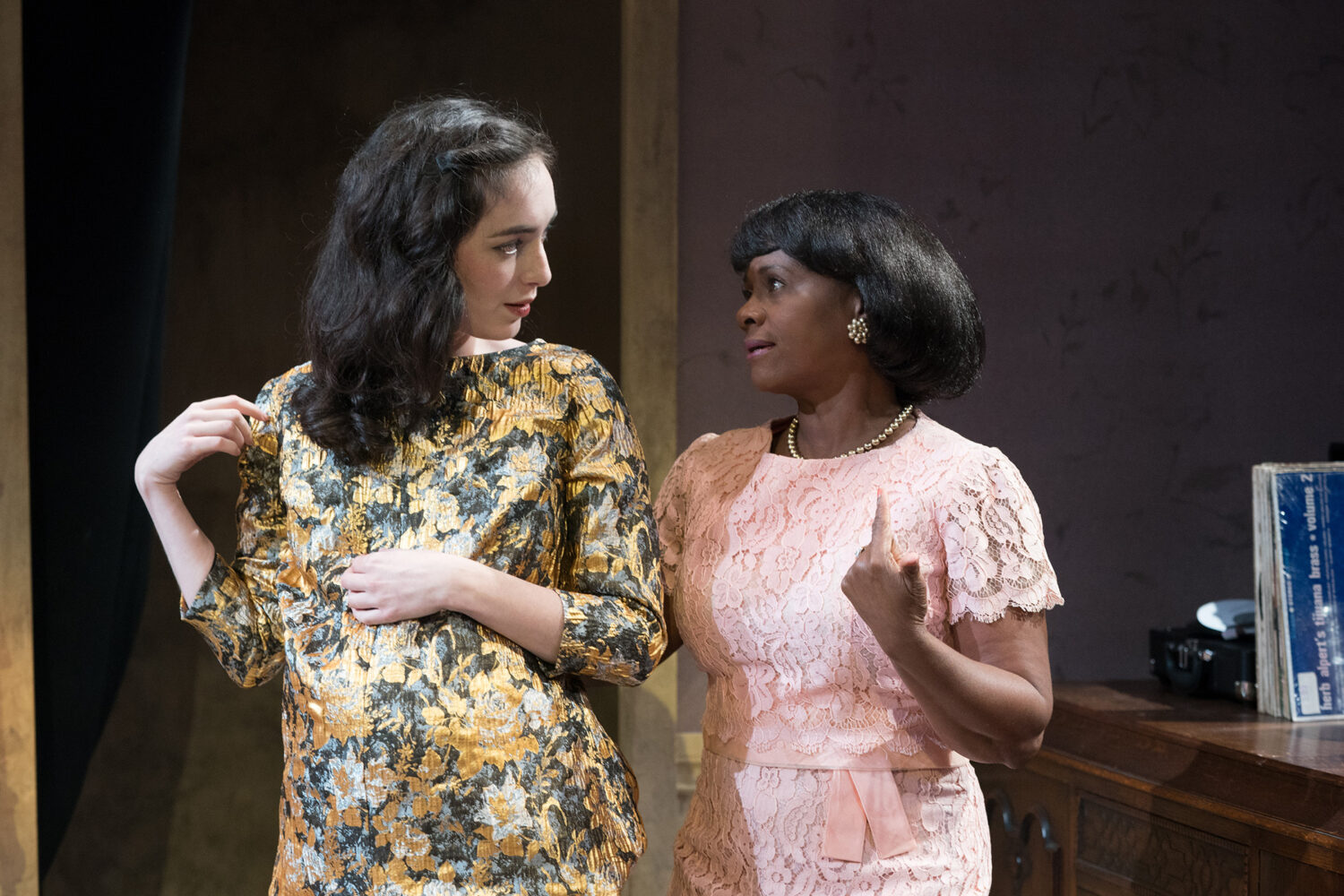 It takes some convincing and mostly on the part of her now-dead mother, but Rebecca lights the first candle in the menora then Anna remains on stage to recite a letter monologue to Erich explaining that she and her three daughters had been on the MS St. Louis, a German ship carrying 930 Jewish refugees from Nazi Germany to Cuba.  Historically, the ship was turned away, and so Rebecca and her family were sent back to face a life full of horrors many cannot imagine.  After the first of many intriguingly choreographed scene changes where actors and crew shift items in the apartment to indicate the passage of time, the next scene opens on December 18th, 1957 with Rebecca now married to Aaron. They both have nightmares after their experiences during the war; he was an American soldier, she a prisoner of the Germans who now believes she is being punished via an inability to have a child.  Each night, the menora sits downstage center and candles are added and removed in choreographed fashion to indicate the shifts in time.

The third shift takes us to December 1, 1964, where Rebecca is pregnant and she, Aaron and Erich are preparing for a visit from Benjamin (Christopher Watson, who also plays filmmaker Matt later) and his wife Arlene (Karen Malina White).  Benjamin was the American soldier who found Rebecca at Dachau and gave her a piece of chocolate that brought her whole world back to her.  Seeing Rebecca brings a mix of memories back to Benjamin that makes him emotional and though Erich remains ever the optimist, insisting nothing close to what they saw in WWII could ever happen again, Rebecca counters that optimism with her belief that it will never really be over until the two engage in a confrontation that neither is ready for.  When this night is concluded, Anna and Rebecca come together for a series of gestures crafted to tell us that there will be a shift of cast now.  Zoe exits as Tessa crosses to Josh and kisses him goodnight.  When the lights come up, it is December 27th, 1978 and Older Rebecca (Tessa Auberjonois) sits with Arlene on the couch having drinks, celebrating a business deal and generally illustrating what good friends they have become. 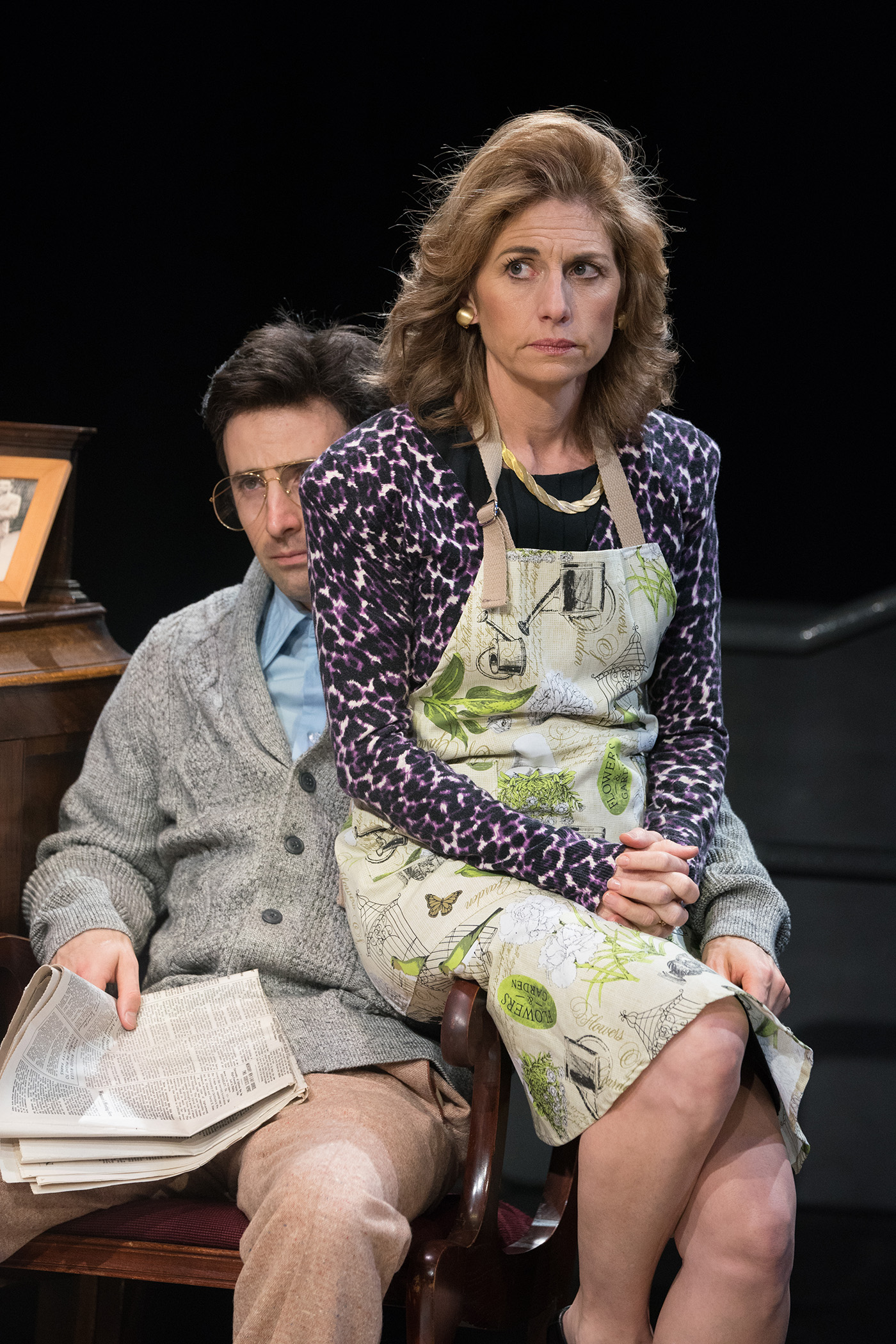 As Karen (and later on as Lacey) Karen Malina White has a strong almost relaxing presence but that doesn’t prevent her for being able to face off with Tessa as she insists that her friend finally tell her daughter Amy (played by Zeo Yale who also adds another generation to her credit when she plays Amy’s daughter Nina later on) what happened to her during the war.  Auberjonois’ reaction to this request is like a knife to the heart as she fiercely stands by her decision not to shape her daughter’s life with those truths.  It’s a strong argument and one that Older Rebecca never truly lets hold of even when she does agree to sit with filmmakers to record her story but it’s one that leaves the viewer with a lot of food for thought.  Night 5 brings us to December 7th, 1988 with Amy now in college coming home for a visit with boyfriend Steve (Devin Kawaoka, who also plays sound recordist Inge later on).   Night 6 takes us forward in time to 1996, Night 7 to 2007, and Night 8 to 2016 where Older Rebecca and her granddaughter Nina welcome Syrian refugee Joram (Arye Gross) and pay forward the favor of a worry-free home that once made Rebecca’s new life possible.

Rebecca isn’t punished the way she thought she might have been when she was a young wife, but she is haunted her entire life by a story she was not able to share.  That inability to face herself and that past have one astonishing consequence when her granddaughter Nina makes an indelible gesture to honor her that doesn’t land the way she had hoped.  It also results in those nightmares of hers stepping into the light when Older Rebecca’s mind starts to slip and she mistakes Nina for her sister, revealing more to the audience about the story she has been running from most of her life than it might to her granddaughter.  The play doesn’t come down either way regarding whether it would have been wise for Rebecca to tell her story or not; it leaves that up to us to debate and consider.  Throughout the years, Rebecca often says, ‘I can’t’ while other people around her say, ‘when you are ready’.  There is beauty and respect in the patience we must have with people who are not able to face their darkest times, but there is also beauty and respect in the effort people around them make to understand that darkness.  Overall, this is a well-written play that avoids easy answers, assumes we are able to keep up, and presents us with questions, which is ultimately ideal.