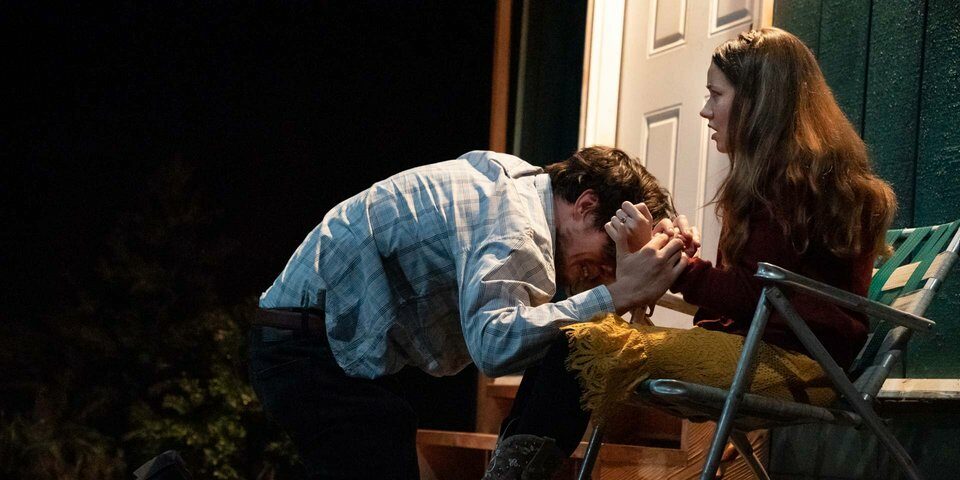 John Zdrojeski and Julia McDermott in "Heroes of the Fourth Turning." Photo by Joan Marcus.

We live in a time, especially in America, of increasing political divide. Many politicians and voters see the political landscape as black and white, “us vs. them,” and it seems like the point of reaching some common understandings has long since passed. However, Playwrights Horizons’ new play, Heroes of the Fourth Turning, seems to want to take a stab at showing audiences what life is like for those on the other side. By “the other side,” I mean conservatives, as judging by early reviews and overheard audience discussions, liberals seem to be the primary audience. The play focuses on four religious right-leaning people in Wyoming, who get together to celebrate the promotion of the professor they all had at the small Catholic liberal arts college they attended. A couple of them haven’t seen the others in years, so as they catch up, they reminisce about the past, talk about their hopes and fears, and naturally, discuss the current state of American politics.

Going into the show, I had fears that this premise could play out one of two ways. One, it simply pokes fun at the conservative crew, and aims to reassure liberal audiences of the righteousness of their own politics. They laugh, they feel good, and they leave the theater unchallenged and unchanged. On the other end of the spectrum, I worried that the premise would attempt to argue in favor of the politics of the characters. In this case, audiences would leave feeling lectured to at best and irate at worst. So I am happy to say that Heroes of the Fourth Turning successfully walks a fine line of challenging audiences, regardless of their politics, while shedding light on various belief systems while not forcing them down anyone’s throats. Playwright Will Arbery explains this best in a program note, which reads, “I’m not asking you to empathize with these characters. I’m representing their positions, with a goal of impartiality. You can do what you want with that access.”

It would be reductive and insulting to Arbery’s well-crafted writing to consider his characters as stock types or, even worse, interchangeable. Sure, each character is a religious conservative from Wyoming, but they all have different beliefs and opinions. To hammer this home, the play contains several heated arguments. Julia McDermott plays Emily, a young woman with a debilitating case of Lyme’s Disease. She has strong religious beliefs which inform her political views, but they also serve as the root of her kindness and understanding of others. Meanwhile, Zoe Winters plays Teresa, who had the same religious upbringing but boasts a cold demeanor that has little room for compassion or compromise. Throughout the first act, the group members catch up, argue, and question each other and themselves. In the second act, Gina, the aforementioned professor, arrives. Played by Michele Pawk, she serves as a source of validation for some and disappointing rejection for others. Some of the arguments with her seem more the result of misunderstandings or differing semantics, so the play becomes a little hard to follow at this point, when it should be growing to a crescendo. Against the other characters, the mysterious and yoda-like Gina comes off as less realized, but this is only because the others are defined so excellently. But her ultimate appearance, after being built to for so long, isn’t wasted thanks to the strong presence of Pawk, who conveys calm assuredness with flashes of ferociousness.

The scenic design by Laura Jellinek and lighting design of Isabella Byrd deserve special recognition of how well they work together in tandem. The well-lit porch stage left invites characters to discussion and discourse, while the dark and obscured area past the fire pit stage right suggests the wilderness, the great outdoors, and the unknown. Together with the mountain range upstage, this provides the illusion that the area extends much further than it does. It really does feel like this is somewhere in the middle of nowhere-Wyoming. The sound design is spare, but Justin Ellington crafts one distinct noise that is repeatedly heard throughout that deserves mention. Every now and then we here a shrieking banshee-like noise that we’re told is the generator , which we believe, but the otherworldly quality of it provides a strong sense of foreboding. I noticed several people jump each time it arrived.

For a show without much plot, Heroes of the Fourth Turning proves fascinating and thought-provoking. Director Danya Taymor also deserves praise for this, as the precise staging of the characters during each argument, fight, or compromise speaks volumes about their relationships, convictions, and insecurities. As I left the theater, I thought about my preconceived notions of the play. Does this kind of content have value? Absolutely. The play allows audiences to explore wildly differing viewpoints in a way that challenges them without every making them feel unsafe. When Donald Trump is brought up, Emily says something along the lines of, “Can we please not talk about him for once?” The play knows that Americans are weary of any more Trump discourse, so it steers clear of hot-button issues that one only has to turn on a news station to hear about (racism is another), and instead focuses on those that don’t get as much media attention but are still important. Ultimately, the argument of Heroes of the Fourth Turning is a philosophical one rather than a political one. It doesn’t provide any information or argument that will change anyone’s mind on any person, belief, or issue, but rather it humbly posits that each of these has contexts, nuances, and even contradictions, which is an exploration that proves valuable, now more than ever.