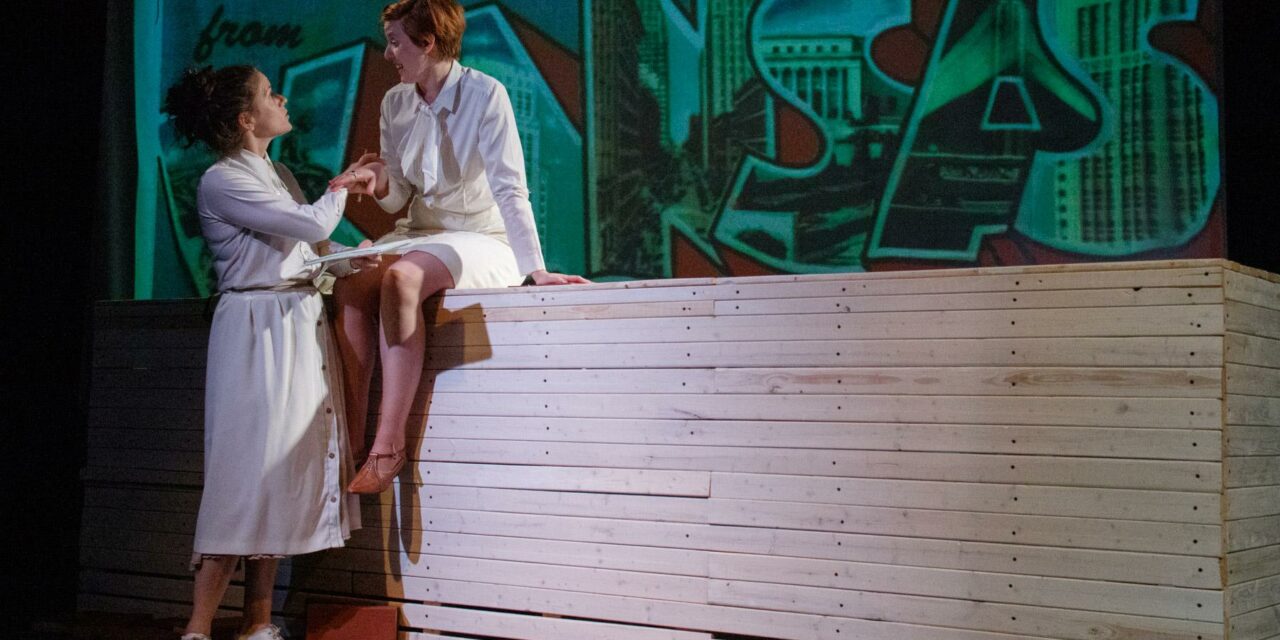 Representation within opera has always been thin; The Impossible She stood to try to expand those parameters by telling a queer perspective of Eleanor Roosevelt and Lorena Hickok.

The Impossible She featured Elisabeth Halliday as Eleanor Roosevelt, Bonnie Lander as Lorena Hickok, and Robert Maril as the abstract title of Outside World; the Outside World character is a heterogeneity including a journalist, unemployed worker, radio listener, and anonymous traveler. These three take vocal and text to elegant levels throughout The Impossible She, but on the opening night, I had the opportunity to also hear the world premiere of Colin Read’s On Loneliness and Solitude. This piece included stretching soprano range into the “middle,” or I would say for Lander, bottom notes, causing for some musical moments to be difficult to understand or to complete the tonal idea. There was a section where there was both singing and clapping and the rhythms because didn’t complement each other so there were moments of hesitation and the listener wonders, are we hearing intentional clash or is this accidental due to a load of singing, moving, and keeping a clapping rhythm that is unfavorable. Though the direction showed two people caressing, there was still poetry and tonality of empty and loneliness, things that often do happen to us, reminding us there is conflict in just existing. Even with those brief moments and questions, this piece truly conveys a feeling of loneliness.

That thought was a beautiful entry into The Impossible She.  The opera opens melodically aggressive, really pushing on Lander’s agility and contextualizing, setting the audience up to that this will be both heavily gendered and that Halliday’s dictation and projection were going to be spot on what I want in a full soprano voice. Throughout the show I found the orchestration to be truly what was pushing a lot of the scene tone and story essence. It was hard to get past some of the self-deprecating language of Eleanor Roosevelt and Lorena Hickok (Hick) in regard to themselves and their feelings for each other. The text took us through the storyline of the suffering of the two lovers to be together. Though that is definitely an angel, for any relationship to blossom, whether it be forbidden of difficult, there need to be moments of love and happiness. Outside of the scene with the two in the park, which also has the pain and suffering of hiding and the fear of being outed, there isn’t much representation of the love the two shared that would allow them to sustain a relationship over 2 years. There were moments of beauty in the lyrics of songs like “That Woman” and during the scene of November 1932. 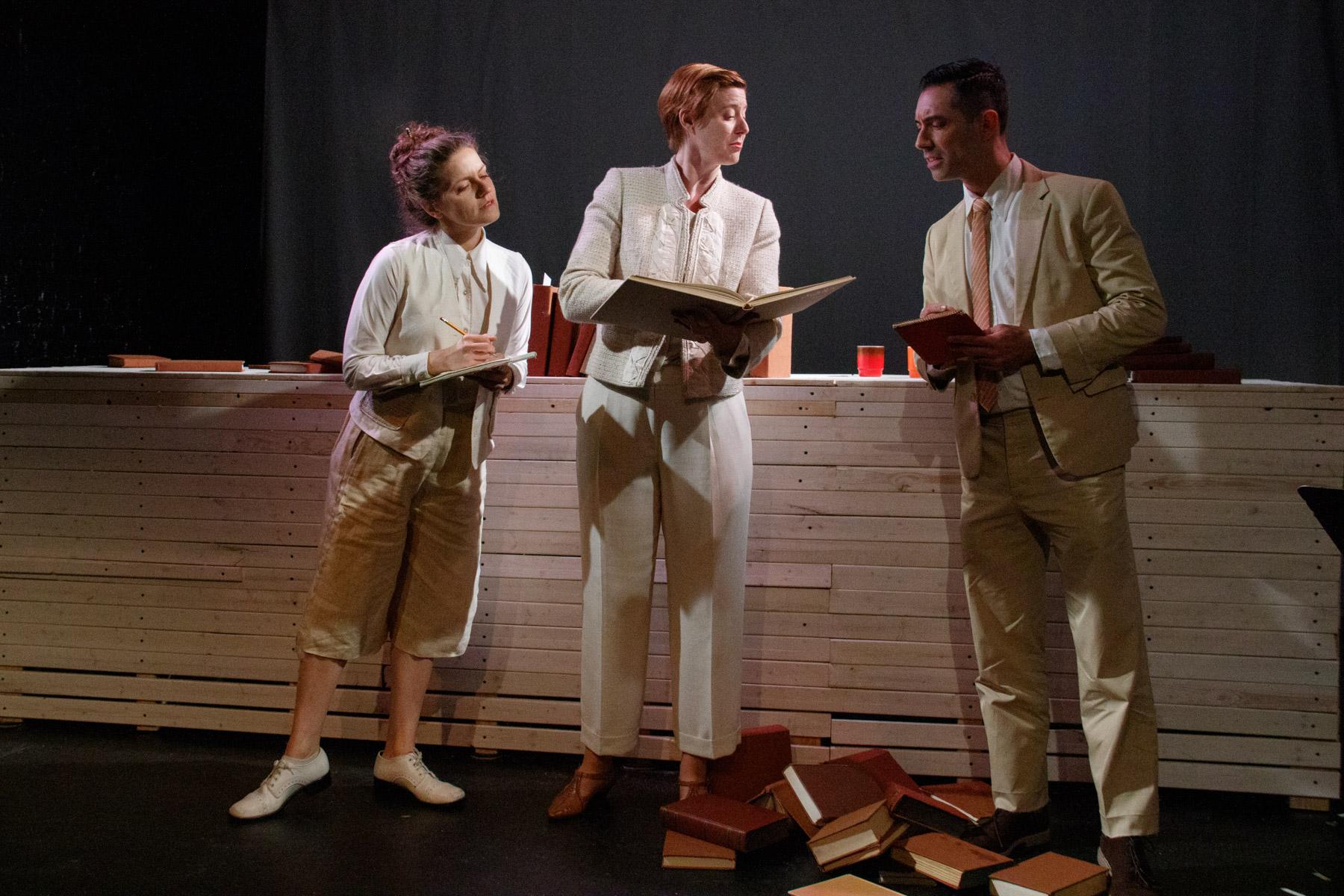 Though musically a lot of the music was beautifully executed by two Sopranos and the flexible range of Maril, I wondered why there wasn’t more vocal diversity. In some of the notes given to Hick, a mezzo would have a better grasp of that range, bringing richer tones to this story. The saxophone interludes and moments of breath took us through transitions, at times, but felt bumpy in some other ways in storytelling. The saxophonist, Zach Herchen, plays the character of Present Voice, described as “the composer’s ear and the artist’s eye; you, me, us; plays many saxophones but never speaks.” In a talk with the director afterward, she expressed excitement in really trying to make those moments still feel alive and a part of the story as opposed to transition segments; and overall unanimously the cast expressed excitement and intrigue in diving in this kind of work and this era of opera.

As a Queer, Afro-Latinx writer I would be repressed to mention that though seeing a story of love between two women in opera is exciting and intriguing. The more crucial question is, is the authenticity of queerness more important than the representation of it? I wonder, not because queerness needs to present a certain way or match hetero-norms, but in the true excitement, like the feeling when your skin grazes across the skin of a forbidden other or the authenticity to a wild and spontaneous rendezvous in a park. How we represent queerness in a genre that is about the highest of dramatic extremes in characters. It’s food for thought for us all as we enter into this age of wanting to see diversity in opera – but also, the beautiful thing about queerness is that I’m not here to validate or invalidate personal queerness. I’m here to point out the way it’s represented in bodies on a stage. It also is a conversation to be had that not a single person in the cast was POC (person of color). After doing even the slighting looking Rhymes With Opera I saw that in the past they’ve produced diverse shows and had a pretty diverse production team for this production; this is not a company-wide attach on diversity. This is an observation that in the age of Lin Manuel Miranda’s playing Alexander Hamilton and Rebecca Naomi Jones playing Laurey Williams, we know that stories about specifically non-POC figures in history can still be told by artists of color. I am always hopeful that these kinds of messages and ideals stretch into the opera industry, as we move away from only seeing singers of color in roles of poverty and suffrage. It’s important to advocate that showing diverse bodies and diverse people on stage; I can feel the change coming to the opera scene. I believe Rhymes With Opera will be the company that helps bring in that change, one world premiere at a time.

The Impossible She brought music and romance to a storyline that could be seen as a small blip in present Roosevelt’s life, a romantic and playful representation of the first Lady’s progression through the presidency, and through the public eye. Musically layered and melodically diverse THE The Impossible She has joined the dialogue on queer representation in opera and Daniel Thomas Davis has made sure to put his musical mark on it.