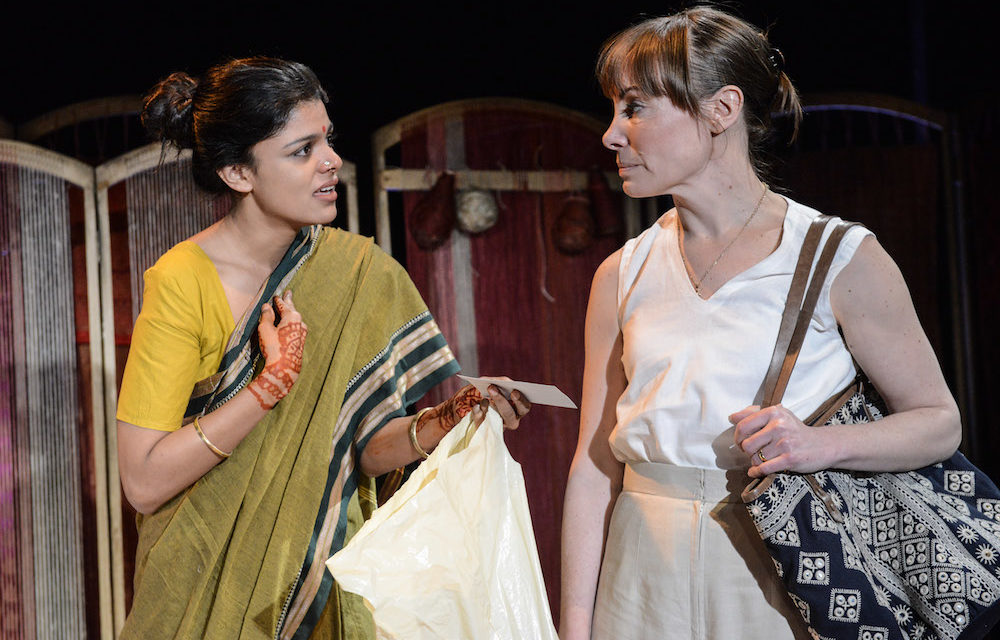 Ulrika Krishnamurti and Gina Isaac in "Made in India." Press photo

Tamasha is a touring company that specializes in cultural diversity. It nurtures new writers and new voices. A handful of years ago, it celebrated its 25th anniversary, and, since the arrival of its new artistic director, Fin Kennedy, in 2013 it has been expanding its interests to include all aspects of intercultural relationships. Its recent show, Satinder Chohan’s punningly titled Made in India, has been touring the country since January and it recently closed at the Soho Theatre in London. The show has been in development since its author received an OffWestEnd.com Adopt a Playwright Award in 2013. That’s a very long gestation period for a story about surrogate pregnancy, but it’s been worth the wait.

Which is exactly what Eva, an English professional who works in advertising, feels when she arrives at the Lajja Gauri Fertility Clinic in Gujarat. In her early 40s, she’s experienced 11 years of IVF treatment and, after the death of her husband Tom from cancer, is desperate to have a child before it is all too late. She’s already lost three babies. So she has travelled to the “surrogacy hub” of India, where a healthy young woman from a rural village will be paid to carry her and Tom’s egg and defrosted sperm to term. Tensions immediately surface as Eva asks Dr Gupta, the head of the clinic, if she can choose her surrogate, and then meets Aditi, a dairy farm worker who is poor and desperate to earn more money because her husband has recently died, and she has two daughters to bring up.

Complications arise because Gujarat state threatens to ban the practice of surrogacy, and when Eva gets to know Aditi a bit too well for comfort. As the three women interact, the desperate emotional and economic costs of surrogacy take their place on stage: Eva is desperate to have a child even if many countries are not keen on using the sperm of dead donors (she’s been through the courts); Dr Gupta is desperate to make money from Western women in order to expand her clinic; Aditi is desperate to earn more in nine months than she would in 10 years of village labour. Chochan neatly ties these motives together to produce a tight narrative that brings out the drama of the situation.

Without oversimplification, the complex ethics of surrogacy are explored. Aditi may be happy enough to carry Eva’s child, but does she really understand the process? When she conceives twins, does she deserve to be paid double for the one pregnancy? And what is the clash between traditional village morals and modern medical practice? Her family certainly has doubts about her being pregnant without being married, and the concept of a dead man’s seed is enough to appall any of her neighbours. And when local politicians threaten to ban surrogacy, how vulnerable is Dr Gupta to greed, and to the information her women are privy to?

Chohan’s play — helped by Kennedy’s dramaturgy — is beautifully structured, and replete with issues and information. The storytelling is swift and surefooted, with new ideas appearing in every scene. The bigger picture, in which babies are “made in India” in a place known as a “fertile state for milk”, gives the play its wider resonance. The colonial past casts a long shadow in this present-day exploitation of the labour of the East by the wealth of the West. However much sympathy we might have for Eva’s plight, it is difficult to be indifferent to Aditi’s problems. By the end, our empathy swings wildly between all three women.

Katie Posner’s compelling and atmospheric production highlights the performance of her cast: Gina Isaac (demanding and desperate Eva), Syreeta Kumar (cool and capable Dr Gupta) and Ulrika Krishnamurti (agreeable and then agonized Aditi). Each woman makes a journey and the actors bring this out brilliantly. Particularly striking are two transformation scenes, in which Arun Gosh’s music enhances the action, and the scene changes which have Shanaz Gulzar’s video projections. Lydia Denno’s design uses screens to evoke looms and local fabrics. With some exchanges in Gujarati, Made in India intelligently challenges preconceptions, makes links between the personal and the political, and paints a vivid picture of postcolonial exploitation.

This review was originally posted at http://www.sierz.co.uk. Reposted with permission of the author. To read an original article, click here.