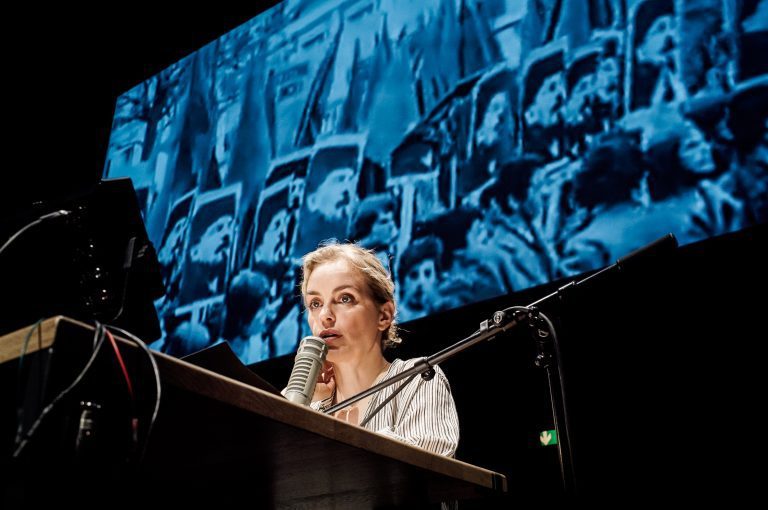 Plays set in recording studios, in my experience, are usually stories of entrapment. The spaces themselves—the soundproof walls and windows, the microphones poised to expose people’s emotional innards, the expensive equipment with its vague techno-promise of newness—are harbingers of pressure and trouble even before anyone enters them. Think of August Wilson’s Ma Rainey’s Black Bottom, where masterful black musicians gather to produce art and instead find themselves in a crucible of racism and exploitation that explodes in on them. And think of Eric Bogosian’s Talk Radio, where a popular shock-jock provokes, insults and brutishly titillates his callers, feeding voraciously on all the negative energy until he breaks down before our eyes.

Interestingly enough, the remarkable Berlin Schaubühne production Returning To Reims, now visiting St. Anne’s Warehouse, defies this pattern. It is entirely set in a claustrophobic recording studio somewhere in Europe, which we stare at for ten minutes before the action begins, particularly at a mic conspicuously planted center stage. Yes, this mic will be a tool for wrenching emotional revelation by the central character, and yes, the confined space will exacerbate tensions between all the characters, just as expected. In the end, though, the play doesn’t leave you feeling breathless or pummeled, or unsure whether you’ve just been abused or enlightened, as those other plays do. Instead, it leaves you grateful, motivated to go talk to someone different from you, and even cautiously hopeful that greater empathy and understanding across social and political class-lines might actually be possible.

Returning To Reims was created collaboratively by the director Thomas Ostermeier, who leads the Schaubühne, and the company member Nina Hoss, most familiar to Americans as the German spy, Astrid, in the TV series Homeland. The piece is structured as an adaptation of the French social philosopher Didier Eribon’s 2009 memoir Retour à Reims, which reflects on his escape from working-class French roots to discover and emancipate himself as a gay man and an intellectual. The book is a chillingly precise, remarkably self-possessed description of personal and class alienations that will feel depressingly familiar to any conscious Westerner in the Trump and Le Pen era. Eribon’s parents, staunch Communist voters for most of their lives, transformed into Le Pen supporters. He set out to explore how that happened in personal and macrosocial terms, and to figure out what might be learned from it.

Hoss plays an actress named Katy who arrives to record passages from Eribon for use as voice-over narration in a film by Paul (Bush Moukarzel), a self-confident, young white guy. As she reads, sections from the film are projected behind her, showing various political confrontations past and present, including workers’ rallies and student uprisings, as well as footage of the actual Eribon visiting his widowed mother in the dreary French town he abandoned. Katy ruffles feathers by not behaving as a mere hireling performer. She interrupts the work to argue about what she sees as distortions to Eribon’s politics in Paul’s text cuts and imagery. These delays, in turn, vex the non-white studio owner Toni (Ali Gadema), who has donated studio time to Paul and evidently thinks the argument effete and lame.

These low-key fractures in the peaceable recording session open up surprising avenues of new communication. Having apologized for his “unprofessional” snit, for instance, Toni drops the fact that he raps and then (with minimal prodding) performs an impressive number revealing sides of himself the other two never thought to inquire about. Katy (also with minimal prodding) then starts talking about “her” father, whose life story matches that of Nina Hoss’s father, Willi Hoss, a well-known politician and activist who started out as a farm laborer, became a prominent Communist and founder of Germany’s Green Party, and later traveled to Brazil to help indigenous people get access to clean water.

Paul soon realizes that this father’s story, told by Katy with intense admiration and steady passion, is exactly what he needs to make his film personal and compelling. Images of Willi from Katy-cum-Nina’s phone are projected onto the upstage screen, and Toni, watching and listening to it all, eventually melts his cool. After a while, these three very different people find themselves engaged in meaningful conversation.

That final scene is an inspiring, ice-breaking and trap-breaking moment.

Nevertheless, it ought to be said that the play’s immediacy and theatricality are almost entirely in its second half. The interrupted recording session in the first half is a bit word-heavy, and the swerve away from it belatedly refreshing.

It’s also worth pointing out that the parallel between Eribon and Hoss is inexact. They’ve both recently lost their fathers and Hoss obviously has deep empathy for the simple pride and practical mindset of laborers. As the child of a leftist activist, though, she doesn’t carry the guilt, shame or anger of someone like Eribon who fled a mind-numbing, abusive, right-wing environment for his very life.

This week, The New Yorker published an interesting piece by Cynthia Zarin that quotes from an interview with Ostermeier. In it, he reveals that he does have an abusive working-class background like Eribon’s, and harbors many of the same conflicted feelings about maintaining or cutting off contact. Those feelings were the initial spark for this extraordinary project; they moved him to send Hoss the Eribon book right after Trump was elected. Whoever our parents are and wherever we come from, we can be grateful he did.

This article originally appeared in Jonathan Kalb on February 19, 2018, and has been reposted with permission.