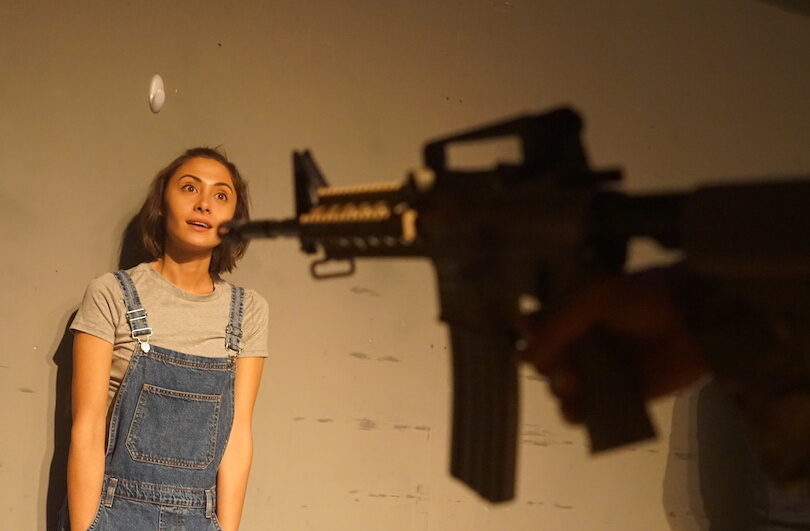 Post-Traumatic Stress Disorder (PTSD) is sometimes referred to as a silent illness. Typically, it takes time to manifest itself, its sufferers are often in denial and frequently don’t have the chance to articulate their feelings. Whatever they might think, they really need therapy. The aim of Taz Skylar and Ross Berkeley Simpson’s powerful new play, Warheads, is to give PTSD sufferers a voice, so although the subject of the play is hardly original, it does succeed in creating a sincere and strong account of trauma.

Miles is a 19-year-old working-class teen from Wood Green in north London. With little employment prospects, he decides to join the army reserves, along with his best mate Mory. Despite the fact that he is relatedly happy, having recently met and fallen in love with Tena, he accepts his commanding officer’s offer of a six-month tour in Afghanistan. With predictable results. When the two lads return, however, it’s obvious that Miles is not well. He’s changed. He needs help, but he can’t admit it. When Tena persuades him to seek counseling, he is openly contemptuous of Philippa, his twentysomething therapist. She’s a young woman so what does she know about being a man?

Skylar and Berkeley Simpson tell this story by using a fractured non-linear time scheme with effectively shows how past trauma is constantly in the present for PTSD sufferers, and how therapy takes place not only between therapist and patient but includes others in the room: comrades in arms, father figures, and lovers. They show how the different people in Miles’s life see him differently: his army captain sees him as a son, his therapist as a child, his girlfriend as frighteningly unpredictable. She’s an actor and her other main friend, Coby, who also works in the theatre, shares her misgivings about the way that Miles has been affected by war.

Like so many other war stories, which are alluded to by a poster of the Stanley Kubrick 1987 Vietnam film Full Metal Jacket and by the video game Call of Duty, this one argues that war persists because enough men get off on it. After serving in combat, Miles cannot easily fit back into civilian life again because the experience of war has awoken a lust for violence. Like other powerless men, war appeals to him because it gives him both power and significance. He is excited by danger and death. In contrast to his mate Mory, Miles feels that war “makes you feel alive”. It also makes him feel like a real man.

Perhaps unsurprisingly, Warheads is a study of masculinity in crisis. Miles feels that he can only be a “real man” if he has experienced the extremes of warfare, but is then ashamed and humbled when the effects of trauma follow him home. In his relationships with Mory, Tena, and Coby he feels that he always has to demonstrate his masculinity—with predictably awful results. At first, he cannot take therapy seriously, despite the fact that his paranoia has resulted in a violent incident in the street with an innocent foreigner, simply because he thinks its unmanly.

Much of the play is more of a case study than a drama, with most of the characters being mere sketches—especially the women—but just when you start to bemoan the absence of a plot, Skylar and Berkeley Simpson give the story a savage twist which neatly ups the stakes. Being based on a real story gives the writing a kind of blunt integrity and its humor is satisfying bleak. True Maverick Media’s production is directed by Toby Clark, whose committed cast make the battle scenes effectively fearsome, and Skylar’s convincing performance as Miles, who sees himself “as a pretty likable guy”, has been helped by the input of Eden Orfanos-Shoro, a psychotherapist who has treated many PTSD sufferers.

Although both Skylar and Hassan Najib (Mory) could do with some more drilling to improve their military bearing, they do well in conveying the youthful emotions of their characters, and are excellently supported by Klariza Clayton (Tena) and Craig Fairbrass (Captain), with Sophie Couch (therapist) and Joseph Connolly (Coby) both making their stage debuts. Roly Botha’s music, which cleverly samples Fleetwood Mac’s “Everywhere”, is effectively atmospheric and contributes to make this a powerful example of socially-aware experiential theatre.

Warheads is at the Park Theatre until September 7.