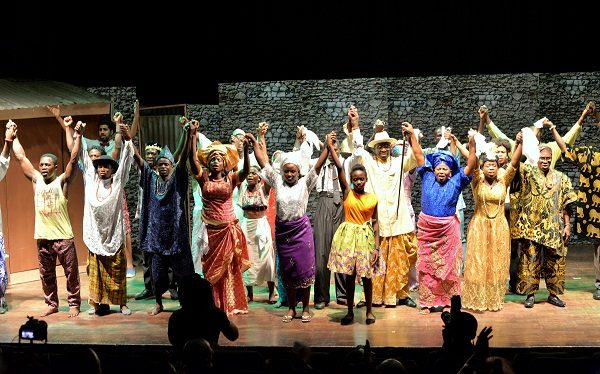 The Managing Director of Katunga Media, Betty Abang, presenters of the play, said: “it was such a thrilling experience, feedback from the audience revealed tremendous acceptance and a yearning for a repeat of the performance. Loud Whispers is a story that every Nigerian can relate with. The play makes bold to say what people will otherwise not divulge, and the story touches on themes that cut through all strata of the society.”

Each show lasted for two hours as every scene, move, song, dance and word told the Nigerian story in the most acerbic yet humorous way that stunned the audience. Each scene weaved through the famous “Agege” bread seller turned supermodel story, the infamous “what if you are a widow? Go and die” story, a prominent politician’s 3-page letter, amongst other themes.

Also highlighted were the prevalent issues of fuel scarcity, Boko Haram insurgency, political instability, and the unfortunate kidnap of the Chibok girls, all narrated in the most comical yet thought-stirring way that left audiences giving resounding applause scene after scene.

One of the highlights of the day was budding 12- year old actress Chantel Edgar, who played one of the rescued Chibok girls. She delivered a heart-wrenching monologue that left the audience in tears as they clapped. She cried for peace and asked that the younger generation be given the chance to lead Nigeria. Then veteran actor Tunde Alabi gave a brief but heart-warming performance with his elderly wisdom and long-standing experience that awakened memories of the good old soap opera Village Headmaster in which he played “Aditu.”

Popular broadcaster, Olisa Adibua, was the Executive Producer of the play, whilst Joseph Edgar, Shina Peller of Quilox and Mofoluwake Edgar were co-producers. The play was adapted and directed by thespian, scriptwriter, and artistic director behind Quebic 4 Productions, William Benson.