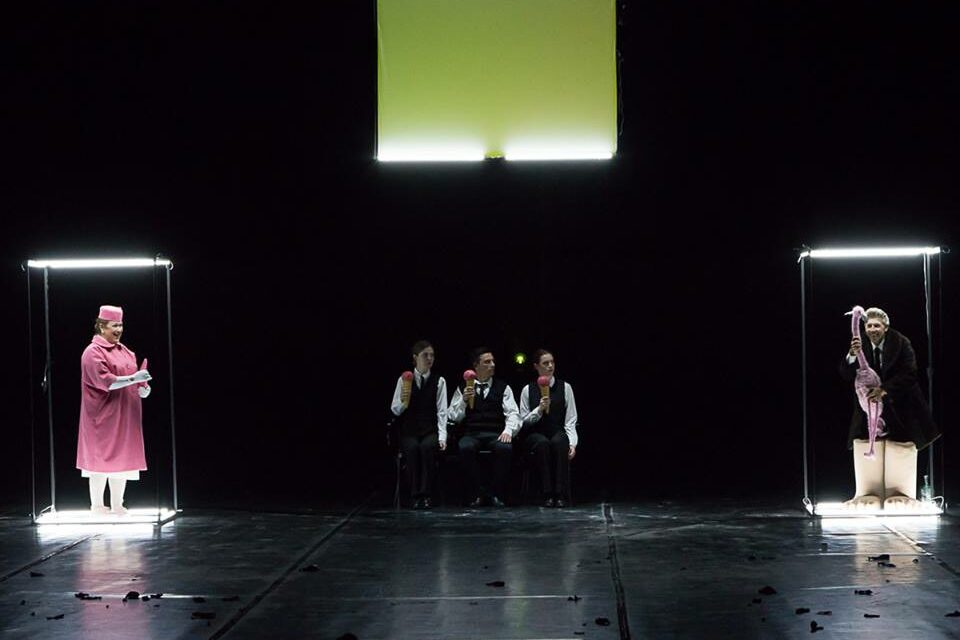 Belarusian stage director Yura Divakov is well-known in the region for his highly visual stagings. Divakov’s project Gogol. Fatum is based upon Nikolai Gogol’s The Overcoat novel. However, the initial authorship of this particular theatrical belongs more to the stage director, than to a writer. Divakov himself has written the introductory monologue of the Pink Dame and offered a motley mixture of associations, illusions, and subconscious fears. The director makes a complex overview of Gogol’s life and literary works. Divakov has marked genre of his production as a “lethargy” (which means “inaction” in Greek).

There’s an obvious referring of “Lethargy” to Gogol’s phobia of lethargic sleep. Also, the director wanted to point at that there’s a hidden reference to the “Liturgy” (since the words sound alike) term – a divine service, which foreruns the sacrament. Robert Walser’s epigraph “Gracious Sir, please no longer believe in me” given in the booklet of the staging should be read as a promise of debunking of human daily life rituals such as death, illness, power, sex, violence, possession, etc. The metaphorical performance was created by Yura Divakov in collaboration with his wife Tanya Divakova. Play is made as a specific form of “visualized poetry” thus reminding the viewers the role of poetic intentions in Gogol’s literary works. 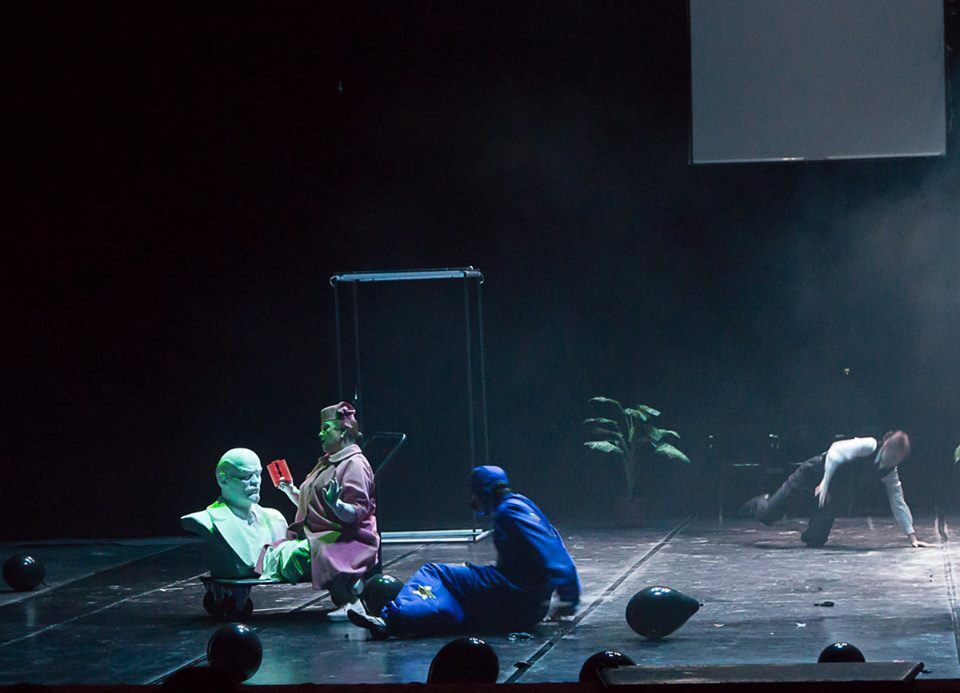 The Gogol. Fatum is full of visual and plot quotes from different Gogol works. There is a recognizable visual quote from the Gogol’s Dead Souls novel: “Russia, where are you rushing to? Give the answer”. There are images of the modernized version of Khlestakov from the The Inspector General. There is a Pink Dame character (performed by Natalia Zadorina), which embodies the casual feminine fate and energy. Her image is completely deceptive. There’s a mystical horror and female bullying hidden under the mask of an elegant old mistress. The Pink Dame scratches the bald head of Lenin’s statue with a huge pink razor blade while singing Laurette’s aria “Oh, my beloved father” from Giacomo Puccini’s opera Gianni Schicchi. There are two TV-headed characters, throwing dumplings at each other (an association with Gogol’s The Night before Christmas). The Pink Dame mercilessly stabs these TV-headed characters with a big knife. Then she shoots other characters with a starting gun. After being shot to death the characters are alternately placed in the ceremonial coffin (a visual quote to Gogol’s The Viy). 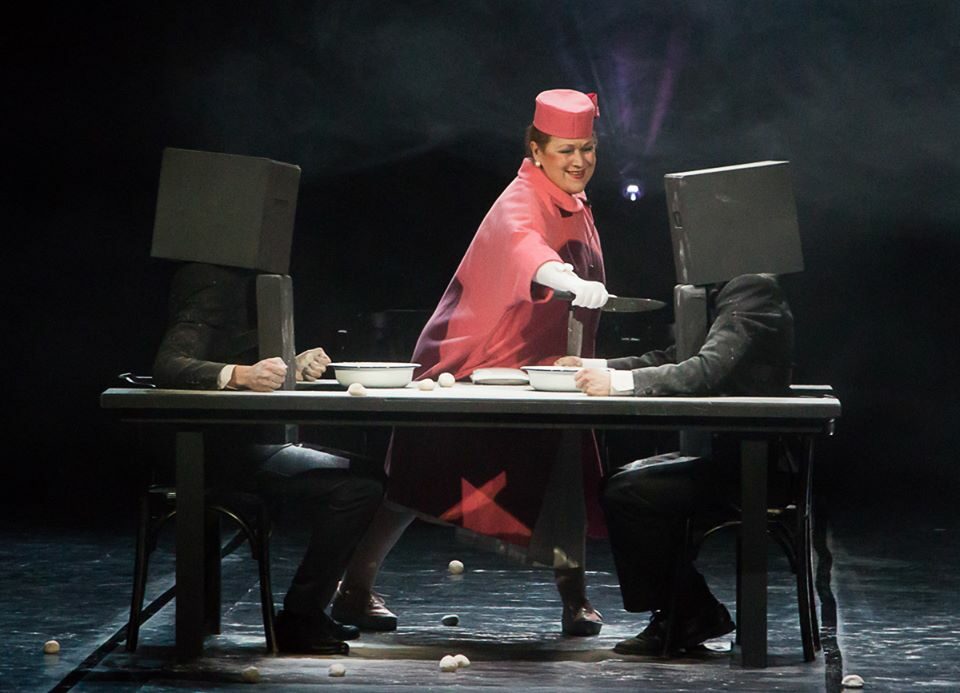 Scene topped by St. Sebastian icon shows the audience two graceful young clerks who are mocking Bashmachkin. Gay clerks arrange office relay race for survival, while two wailers (played by Alexandra Bychkova and Elizaveta Olkhovka) are shouting Latin names of diseases. In this homosexual erotic episode, Divakov sneers at the “fashion for success,” careerism, as well as corporate ethics. “Agnus Dei” scene depicts vanity and fluctuation of public recognition according to the director. The female character holds a lens near her face. Two clowns of Comedia-del-Arte aesthetics (played by Denis Sych and Yevgeny Perelygin) strew female character’s path of roses. When she stumbles, clowns roll her into the carpet, thus preparing the sacrifice. 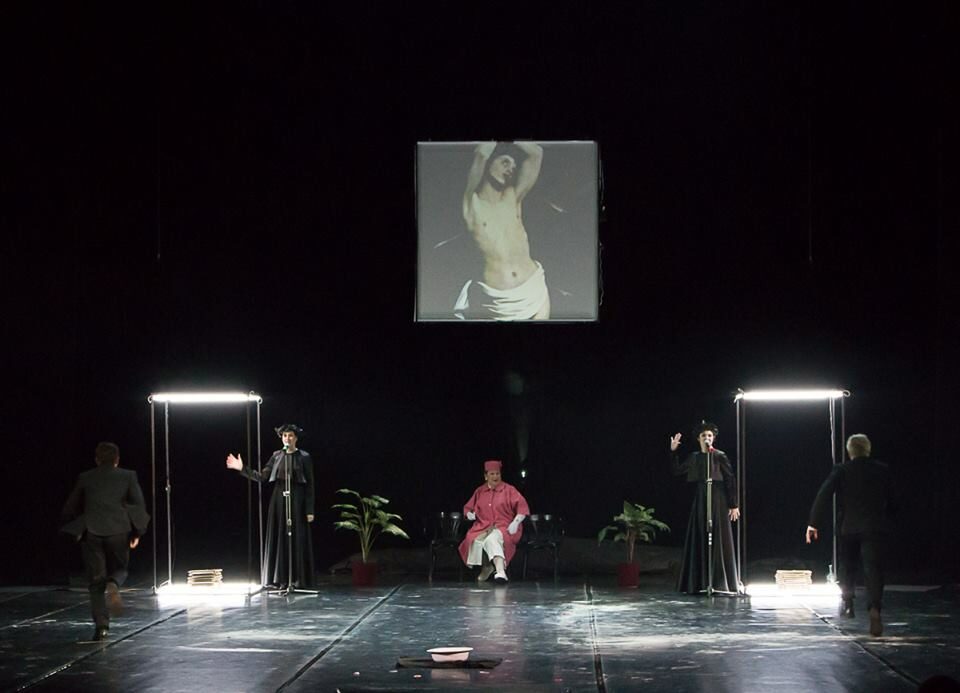 Psychedelic music for this stage play was composed by Eric Orlov-Shimikus, who is Diakov’s usual music co-editor. Two folk songs are played during the performance – the Ukrainian “Oy na hori zhentsy zhnuts” and the Russian “Vo poli berezka stoyala”. The first song was used in an ironic episode that refers to “Taras Bulba” while the second song was made as a circumlocution of Dead Souls. The scene is built around the set with a huge white bed full of Russian gangsters dressed in mink coats (as a paraphrase of an overcoat desired by Bashmachkin).

Yura Divakov’s Theatre is a unique and absolutely individual phenomenon, whilst the ultimate subjectivity, decorative aestheticization, the game of the subconscious, mythology, the world of dreams and hallucinations become fundamental on stage. Gogol. Fatum is on-the-bench testimony of the postmodern theatre striving for neo-modernism.