Surge Madrid is a performing arts festival that usually takes place in May. However, this year it was re-scheduled to October due to the lockdown. Focusing on alternative theatre, the festival is an opportunity for many little-known artists to showcase their latest works in the capital of Spain.

The number of performances every week is so large that it was impossible to cover the festival in its entirety. Consequently, a selection of plays was made based on the information provided by the festival and previous knowledge of the companies and artists.

¿Conoces a Arturo UI? (Do you know Arturo UI?) is an adaptation of The Resistible Rise of Arturo Ui by Brecht, created by Cesar Barló and produced by Alma Viva. This play has the intention of establishing a relationship between the rise of Nazism and what it is happening in Western democracies nowadays. It addresses how easily populism and charismatic leaders rose in our societies, and how all this stuff is facilitated by democratic legislation and journalism. The play becomes more interesting when the actors stop the Brecht play to discuss the plot according to the current Spanish and global political situation. Debates on TV, in newspapers, and of course, in the streets where right-wing extremists are rising, using the Arturo UI strategies and tricks, are referenced. These are people who know how to block democracies and erode them from inside. It is a production that reminds us of the Schaubühne theater’s ways of working or those of any national theater company.

En Inverness (At Inverness) is a version of Macbeth by Luis Miguel González Cruz and Antonia Domínguez, the director and the performer of the play, respectively. The story is told by Lady Macbeth as she manipulates puppets portraying the rest of the characters, her husband included. She is a metaphor for the plot of this Shakespearean classic. She is accompanied on stage by a pianist who play several pieces of contemporary music that create a creepy atmosphere for this bloody story, showing powerful people never have enough power. They always want more.

Fígaro by the baritone Andrés Jiménez-Ramírez takes opera out of opera houses. Based on Les nozzes de Figaro by Mozart, he sings some arias accompanied by a string quartet, which is surprisingly placed behind audience’s seats. The singer mixes songs and information about the play extracted from different essays. He attempts to clarify the character Don Juan‘s nature, and what this modern myth means in its own times and in the present. A play starring a baritone who loves this Mozart opera, it reasonably doubts if Don Juan, as a sexual predator, could be interesting to societies that promotes gender parity, as ours does.

Germen (Stem) written and directed by the actress Laura Garmo, has been the surprise of the festival. This play is about three outsiders who are looking for love and friendship. It is a simple story of broken hearts and tough lives told in a highly intelligent way, and grabs the attention of the public by moving them with an evocative soundtrack. Everything works, from the acting to the simple setting. It’s a very trendy play that would be appreciated by a wide range of spectators, especially anyone who has had a lonely heart at least once in their lives.

La tetraplejia del cor (The core tetraplegia) by Santi Senso is an autobiographic story about a gay boy in a little Spanish village in the 1990s. It tells the story of a naughty child who studied at a catholic school in a white middle-class neighborhood, where gypsy bands are seen a threat. The evocative text becomes amazing, contemporary choreography full of images that reminds us of pictures and sculptures of old churches, mixed with horses and centaurs, in a subtle reference to Lorca’s The Public. It celebrates handsome men’s bodies that are naked by the end of the show, as a way of release. The costume by Fede Pouso, which Santi Senso wore in the show, was one of the most celebrated parts of the performance and festival.

Las uñas rojas (The red nails) by Emilio Gómez, who is also the performer, is directed by Jacinto Bobo. It is a monologue by a middle-aged actor who decided to give up acting as he is delivering Hamlet‘s line, “To be or not to be?” He is fed up of living the actor’s life with no days off, and invites the audience to leave the theater. It is the beginning of a flashback about his life not just as an actor, but also as a child and teenager. It tells the story of a gay boy in a Spanish village who had to hide his sexuality in order to avoid bullying, until he moved to a big city to study theater. It’s a sad story but with plenty of fun and Spanish pop music, and demonstrates that few staging elements are needed when there is a good actor on stage.

Mientras tanto (Meanwhile) is by Lucio A. Baglivo, dancer and choreographer, who has recently been working with Bob Wilson in France. He created this dance piece about what happens between two people, beginning at the time they met, until they become a traditional couple (as traditional as a gay couple can be). The play features two young male dancers that dance, act, and sing; their signature is the popular Hypeballad by Björk. They play in an empty space serving as an adult playground where both actors and audience of any gender can feel happy and encouraged by watching them dance.

Mujer Hamlet (Hamlet Woman) is a version of Hamlet written and directed by Pedro Martínez, and produced by Casa Lagarta. Martínez asserts that Hamlet is a story about power showing that only men are powerful. Therefore, he decided that all the male characters should be performed by women, and all of the female characters are performed by men. Moreover, the actresses maintain the male character names and the actors the female ones. In addition, none of them play the same character for the whole performance because the director wanted to avoid any hierarchy among performers and keep the focus on the power in relationships. It could easily become a mess, a kind of weird Noises Off-style comedy but in fact, it is not. The direction and performances are so clever that people who had never seen Hamlet before may think it was written as it was performed in the Surge Madrid Festival. This is a Hamlet with empowered women and feasible men.

A lot of the performances in the Surge festival present a point of view on popular topics as love, equity, gender parity, sexual orientation, loneliness, politics, or power. The festival demonstrates a kind of theater that uses beauty as inspiration for building sympathetic and open-minded societies, and a way of working that shows how to get the most from a low financial investment. The artists are well prepared for getting the most out of the conditions in which they must work, because of their imaginative point of views. This is the kind of network that vivifies the cultural life of any big theater city and deserves the attention of fans beyond the alternative theater scene. 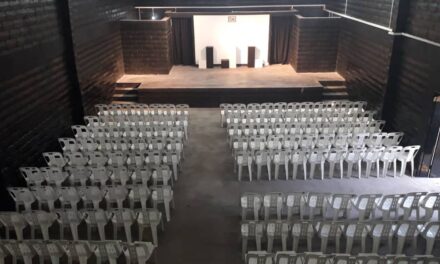