"Hamlet" production at Berlin’s Schaubühne: long-time ensemble member Lars Eidinger has also made a name for himself as a film actor. | Photo (detail): Arno Declair / Schaubühne am Lehniner Platz

With its three transformable stages, the “Schaubühne at Lehniner Platz” is the largest theatre in West Berlin and features productions on political and socio-political issues by renowned directors.

MAKING THEATRE HISTORY SINCE THE 1960S

Founded in 1962 as “the Schaubühne at Halleschen Ufer,” the Schaubühne has been committed to reflecting on political and social issues from the very beginning. It began writing theatre history in 1970 at the latest with the arrival of director Peter Stein and a young group of theatre-makers and performers. Working with actors like Bruno Ganz and Otto Sander, Stein developed his own directing style and new forms of theatrical collaboration.

In 1981 the theatre moved into a listed building on the upper Kurfürstendamm designed by Erich Mendelsohn. Originally a large cinema, the main room flexibly converts into as many as three smaller theatres as needed. Directors like Milo Rau, Falk Richter, Mina Salehpour, Lilja Rupprecht, Herbert Fritsch, and Patrick Wengenroth have worked here. Directors also come from abroad to work on individual productions, including Rodrigo García, Angélica Liddell and Katie Mitchell. The theatre’s artistic director since 1999, Thomas Ostermeier, staged pieces as well. Every year numerous awards bear witness to the Schaubühne’s success and stature. 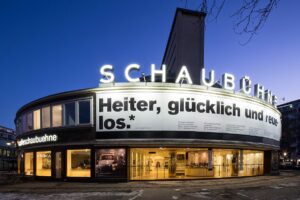 The Schaubühne moved into a listed former cinema in Berlin-Wilmersdorf in 1981. | Photo: Gianmarco Bresadola / Schaubühne am Lehniner Platz

At least ten performances premiere at the Schaubühne each season, where works from a repertoire of more than thirty contemporary and classical pieces alternately take the stage. The schedule features experimental, musical and dance theatre. The Schaubühne has also organized the Streitraum series since 2000, where scientists, politicians, artists and authors explore individual aspects of a current topic in panel discussions. Publicist Carolin Emcke has moderated and curated the series since 2004.

Since 1999, the Schaubühne has had a permanent ensemble, a circle that consistently expands with new talent. The core of the troupe includes thespians such as Lars Eidinger, Jörg Hartmann, Ursina Lardi, Nina Kunzendorf, Hans-Jochen Wagner and Mark Waschke, who have also made names for themselves on television.

The Schaubühne tours the world with its plays, holding around a hundred performances outside Germany every year, including at major international theatre festivals such as the Salzburg Festival, the Festival d’Avignon, and the Festival Internacional de Buenos Aires. Few German theatres have such an impressive international presence. Since 2000, the Schaubühne has also hosted the annual Festival Internationale Neue Dramatik (FIND), at which renowned theatre-makers and talented newcomers present their work. The festival’s workshop program provides a forum for acting, directing and dramaturgy students from all over the world.

Romy König is a freelance journalist who reports on healthcare, business, and culture.

This article was originally published on https://www.goethe.de in May 2019.