Earthport was performed in Berlin and Cairo in 2016. This article is based on the Berlin performance.

Earthport is a human-specific project of one-on-one performance, and an Egyptian–German collaboration by Lamusica Independent Theatre Group and meet MIMOSA. It is funded by Szenenwechsel—a program of the Robert Bosch Foundation and the International Theatre Institute—and supported with means from Bezirkuskulturfonds through Bezirkskulturamt Friedrichshain-Kreuzberg. 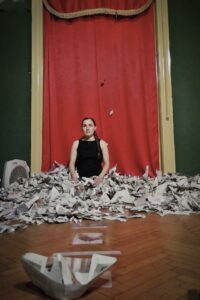 Getting to the performance space is tricky. I leave the train station and go upstairs to face a café that reeks of weed and heroin. I walk between a couple of its tables, conscious of the looks targeting me from people sitting in the café. I walk through what seems like an open-air hallway and wait by an iron gate until performance time. I feel that I’ve arrived at the wrong destination except for the fact that I see a small sign with the performance name and an arrow pointing at the iron gate. When the time of the performance approaches, the iron gate opens, and I finally breathe with relief that I’ve made it to the right location.

The performance consists of six acts and five transitions. In each act, one spectator faces one performer. In general, the logic of the performance depends on physical closeness to create a human connection that surmounts language barriers and race/gender differences. The physical closeness in itself constitutes an ephemeral bond with the performer and a potentially lasting bond with the self.

After getting the map of the experience, I enter my first destination; I am not sure what to do as a spectator, where to stand, what to look at. In my case, I am surprised to see an actor I met once in Amman, Jordan, a long time ago; my first reaction upon seeing him is to give him a hug and to exchange small talk before he begins the performance.

I restrain myself and try to immerse myself in the experience; I have to admit it is hard for me. Like many, I am used to going to see theatre where I would be nobody during the performance time. I would sit in the darkness and enjoy the performance. In this case, I am invited to be part of the performance; the performance will not happen until I rid myself of my comfortable spectatorship position and yield myself to the performer’s action. The scene presents the stereotype of the Arab brutal man who is transported to another level where the spectator is confronted with his/her prejudice. It is an encounter in which the physicality of the performer is threatening, yet it transforms to an image of vulnerability and childhood.

One of the most intriguing features of each of the episodes is the detailed precision that is given to objects. The performers for sure use their traditional acting tools such as voice and body, but they also use objects in such a way that all the focus of the performance moment yields to the way that a performer is immersed/engaged in his or her object. Immersion is transformed, then, on the spectatorship level as the spectator immerses herself in the world where suspending her disbelief is a must if she is to enter this creative territory.

An example is a brutal scene where Adel invests in a precise connection with the objects, the toys in his case. 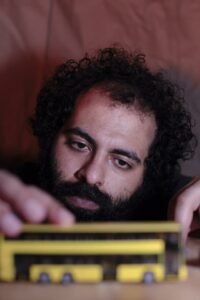 In most of the episodes, the objects support the performer’s discourse to unpend the spectator’s expectations. In one episode, in particular, I enter a room, a space that is empty aside from a small carpet, very similar to the Islamic praying carpet, and in which a dark-skinned actress faces me. Knowing that it is an international performance with an Egyptian director, I assume that she is going to tell a story about Egypt; instead, she shows me pictures of her mom, who is white, and tells a story about Austria during the Holocaust. I catch myself falling into the trap of labeling and using my stereotypical conclusions affected by the color of the performer, and the context of the performance, to find myself abandoning my judgment and allowing myself to witness the performer while she goes into a trance mode: the closeness to the performance space and the connection that is already there allow me as a spectator to immerse myself in her trance. In that episode, my spectatorship expectations are reversed in the same way that the carpet signification is reversed, as I suddenly begin to see it as a flying carpet, whereas I first saw it as a praying carpet.

In another episode, the performer invites the spectator to immerse himself in the “mood” of the scene through physical movements, in an attempt to make the spectator go back for his inner self, for a territory within the self that is maybe forgotten and to reconnect with this territory while connecting with the performer at the same time.

The scene about refugees, in particular, takes me to all the discourses surrounding refugees in Europe. While I face a performer who is labeling refugees, I become aware of the risk of using a single narrative making refugees in Europe fit within a single story. They are either demonized or purified. There is no middle ground or attempt to fathom the multiple layers and the complexities of the story of a single person who is running for her life.

Presenting a one-dimensional story usually is connected with the question of power: the minute you are labeling the other as either this or that, you are assuming the power to create a narrative that is one-sided, and encouraging the formation of stereotypes.

In general, Earthport offers the spectator the opportunity to leave her traditional role of observing and instead to enter a state of spectating, a territory that is characterized both by immersing the self in the mood of the scene and by witnessing the act.

The performance weaves its discourse in multiple languages; you hear Arabic, German, and English while the stories extend on the map and travel all the way to Egypt, Germany, Austria and elsewhere. Despite all the layers and differences between stories and languages, still, there is at least one moment in each scene that will ground the spectator’s experience. 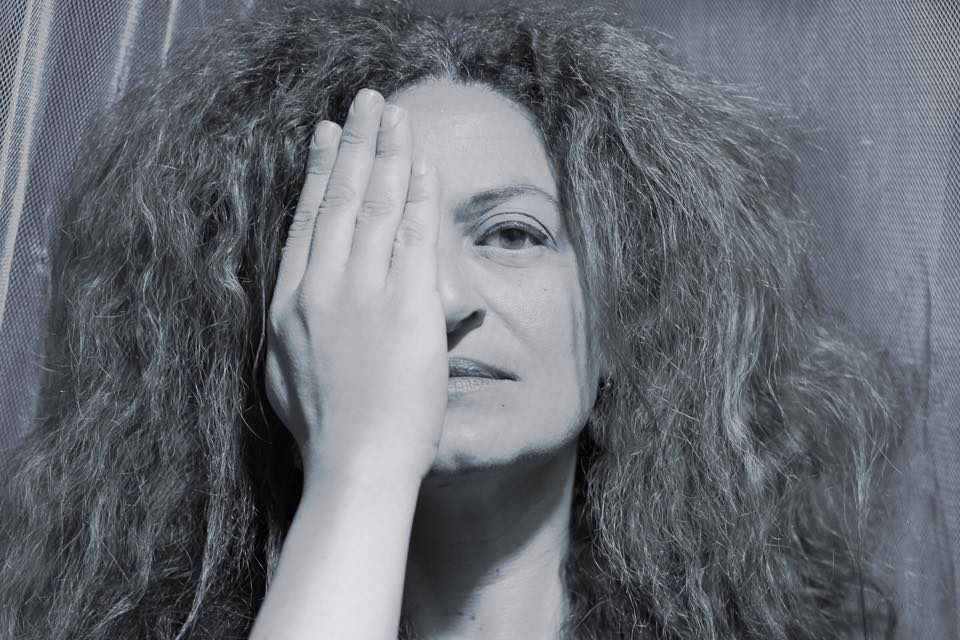 While traveling from one encounter to the next, you get the impression that each episode is different from the others, that borders exist as each performance territory is isolated in its space; however, in each of the episodes there is a moment where the performer and the spectator are unified as they become one in “it” together.

While the performance ends, the performers gather in the transition room while the spectator leaves the space, glancing at them together; they transcend their boarders and share the same space, the same way that the spectator gathers all the moments of connections while looking at them.

I leave the performance space, I walk through the café; this time, I am not bothered by the smell of weed reeking from the café; this time, I am not conscious of the looks of the people sitting there. I am so much connected to the rooted place in myself. I breathe, while I hear different languages in the street, I envision the world where people from different backgrounds accept each other, where the self and the other can be pieced into one.