Despite floods disrupting schedules, the theatre scene in Kerala managed to steal the show this year.

With shows canceled, rehearsals put off and funds cut short, 2018 proved a testing year for Kerala’s theatre fraternity. However, the months before the flood in August saw some commendable efforts.

Foremost among them would be Ali–Beyond The Ring that told the story of the boxing legend Mohammed Ali. Written by Madan Babu K, it traces the champion boxer’s life from Cassius Marcellius Clay Jr to Muhammed Ali, from the streets of Louisville in Kentucky till his twilight years. Directed by PP Joy, Ali proved to be an eventful theatre experience.

The play will be part of the 11th International Theatre Festival of Kerala (ITFoK 2019) to be held in January in Thrissur. Veendum Bhaganvante Maranam (The Death Of Bhagavan–Once Again), a theatrical adaptation of KR Meera’s short story Bhagavante Maranam, directed by Hazim Amaravila emerged as a significant production. 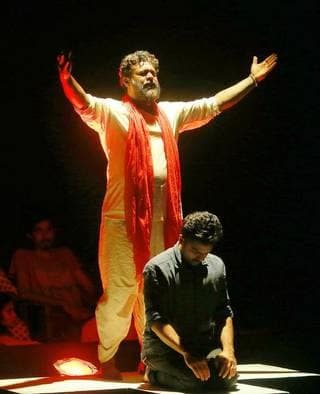 A fund-raiser performance of the play organized in the capital city managed to raise some ₹50,000 towards the Chief Minister’s Disaster Relief Fund. A bold political play that takes a clear stand against fanaticism and State terrorism, Bhagavante Maranam Veendum fearlessly takes a political position, while the “play within a play” structure worked out smoothly. It got selected for the 20th Bharat Rang Mahotsav, an international theatre festival organized by the National School of Drama in February 2019.

Thuramukham (The Port), directed by Gopan Chidambaram, a faculty at the Department of Theatre at Sree Sankaracharya University of Sanskrit, Kalady, which was staged in July, is based on a script written by his late father, K M Chidambaram, half a decade ago.

Shakuntalam–A Hunter’s Tale, an adaptation of Kalidasa’s classical work by Kochi-based theatre person Chandradasan for Lokadharmi, was one of the “flood-hit” plays. Though an in-house staging was held in September, a public staging had to wait till the next month. Sakunthalam will also be part of the ITFoK.

Though premièred last year, Thiruvananthapuram-based theatre person Prashanth Narayanan’s Mahasagaram came back to the stage this year after a short break. A memorable journey through the works of littérateur MT Vasudevan Nair, Mahasagaram has the writer’s voice as narrator connecting different episodes representing his literary and cinematic oeuvre. Around 30 characters from MT’s works appear on stage in this play, which brings together 18 actors, including Surabhi Lakshmi, Bineesh Kodiyeri, and Nisthar Ahmed. The play has been scripted by writer V R Sudheesh.

Pithala Salabham (Bronze Butterfly), written and directed by Sasidharan Naduvil, is woven around a mythological subaltern hero who meets a treacherous death at the hands of upper-class lords. It was premièred a couple of months ago. Nona (The Lie), which premièred last year, was very much in the news this year as well and went on to bag four awards at the Mahindra Excellence in Theatre Awards (META), including Best Play, Best Director, Best Light Design and Best Stage Design. Directed by Jino Joseph, Nona is a socio-political satirical play that examines falsehoods propagated by governments.

A couple of plays by up-and-coming theatre persons also premièred this year. Boiling Point directed by Aliyar, Sun Glass directed by Varun Madhav and Peru (Name) by Nikhil Das were some of the notable ones.

Despite suffering some setbacks, Kerala’s theatre scene looks set for brighter days in the coming year.

This article appeared in The Hindu on December 27, 2018, and has been reposted with permission.