The ‘Incubator 7 : An international virtual storytelling festival’ produced by POPArt was on various POPArt Virtual Theatre Channels (Website, FB, IGTV) on the Thursday 7th May 2020. Image Curtesy of POPArt.

In the midst of the Covid-19 pandemic which, among other industries, has adversely affected the theatre sector in South Africa and globally, POPArt, a cutting edge South African based experimental theatre production company (and venue), has taken to innovation and made real the adage that one must make lemonade when life throws you lemons!  Through the virtual online project dubbed the “Incubator 7: An international virtual storytelling festival,” which took place on Thursday 7th May 2020 and was broadcast live on all POPArt Virtual Theatre Channels namely, their website, Facebook and Instagram platforms, POPArt was once again at the forefront of experimentation, this time in the previously unexplored virtual theatre universe.

Accordingly, POPArt invited 7 writers, 7 directors, 7 cast members from 7 different parts and regions of the world, and gave each of them 7 days of preparation which produced 7 pieces of “theatrically styled” virtual storytelling pieces. This concept borrowed elements from POPArt’s ‘24 Hours in the City’ format and the culmination of the brave experiment premiered on the various POPArt Virtual Theatre Channels (Website, Facebook, IGTV) on Thursday 7th May 2020 to an audience of about 1,500 viewers globally.

Though it sounded like a simple concept, it immediately threw various complications at the creative-collaborators from navigating the challenges of conceptualizing and testing ideas virtually, creating or developing of theatrical aesthetics online (for an audience used to live-theatre aesthetics), working across multiple time zones, trying to develop and maintain a sense of ‘ensemble’ within a virtual space and many others about which the creative-collaborators had no idea when they started thinking of how this could work.

According to POPArt Artistic Director, Hayleigh Evans working on the project “was an entirely new experience – the newness mostly in being far away from each other and not being able to console or congratulate with a hug. We have done many experimental projects over the years where we give ourselves strange limitations to test our boundaries – but this was by far the strangest. Having said that, I was blown away to see how the prompt pushed us into such a fertile place for further experiments. I was so pleased that it did not feel like anything was trying to be film and it felt like all the pieces understood that and had a route in theatre. It really is a testament to the agility of independent theatre makers!”

What this project showed was that though theatre conventions have existed for centuries, Covid-19 gave impetus to unpacking and experimenting with them in ways that nothing else ever could – and watching the various performances one got a sense that there is value in exploring the virtual and online space because as much as Covid-19 will end new hybrid mediums and aesthetics will emerge and producers, performers and audiences will have to embrace them as the ‘new normal’.

Dintshitile Mashile who was one of the Project Coordinators found that “the experience was extremely fruitful. I am overwhelmed. As a theatre maker and producer it was imperative that the creative space gets held during this time in a way that was contained but not confining either. I did not know how to express it in this particular way until Hayleigh (POPArt Artistic Director) and I had a conversation with Chelsea Dee (a USA-based Playwright) during our INCUBATOR7 briefing session with her over ZOOM. She used the words “contained but not confined” to describe the measures at play”.

For Tefo Paya, one of the performers from Botswana, what stood out were the challenges of navigating the virtual collaborative elements meaning there were multiple dialogues with his fellow creative-collaborators around script interpretation and ways of digital presentation but in the end, the experience was “a welcome to the future and endless possibilities for collaboration, type moment”.

The challenge will be that after Covid-19 ends, what happens to this newly found audience who may not necessarily be the same audience that was going out to theatres before the pandemic. POPArt and a few others seem to be well ahead of the pack in responding to these challenges of our times!

POPArt has also been doing other work during the Covid-19 pandemic such as the Zoom-Prov: Live Improv in a time of Covid series which again pits different actors in various situations to explore their improvisation skills all broadcast on their website.

This article was originally posted at theafricantheatremagazine.com on May 15, 2020, and has been reposted with permission. Read the original here. 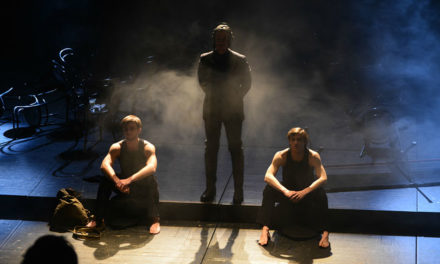 “En Masse” Is An Arresting Fusion Of Circus, Dance, And Classical Music