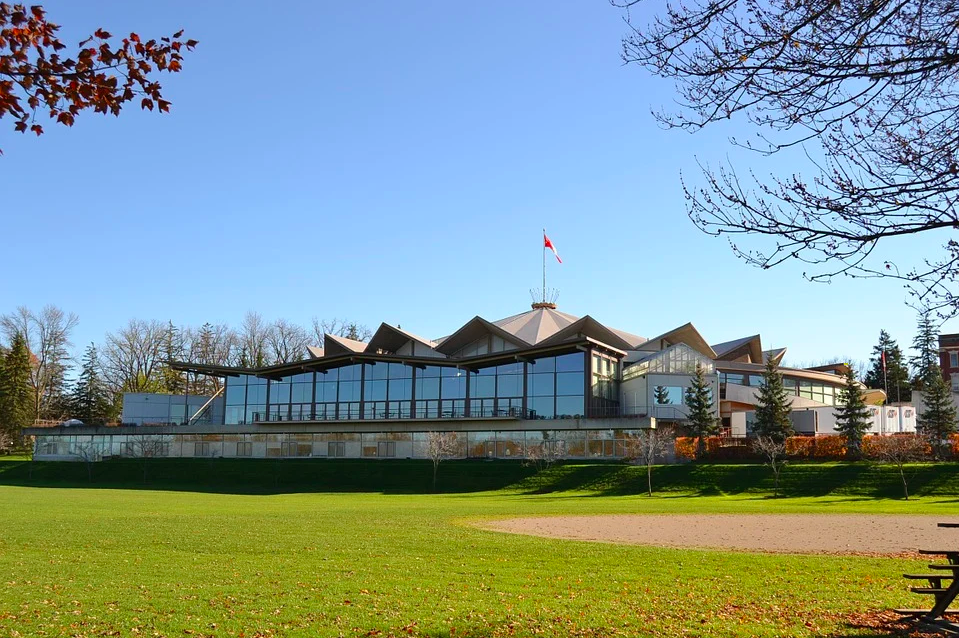 The outside of the Stratford Festival in Ontario, Canada. Photo courtesy of Pixabay.

Imagine you have just experienced one of the most extraordinary performances you have ever seen in your life. You, along with the rest of the audience, are on your feet applauding enthusiastically, and everyone in the room is bonded by the knowledge that they were involved with a wonderful, maybe even transformative, adventure. You take a moment to note how you feel, and start to gather your things. Then, out comes a person without a flashy costume, maybe holding a clipboard or a cup of tea. They confidently step center stage and announce that if you would like, they will be hosting a post-show discussion in five minutes, and would love to dive deeper into the performance you just experienced.

As a theatre maker and dramaturgy major, I usually do (but you probably could have guessed that one). Whether it is called a post-show discussion, a talkback, a Forum, or any other title, I enjoy digging into performances by comparing my takeaways to others’ thoughts and reactions. While most performances are planned down to the last cue, the post-show discussion is entirely improvised, which means every session is unique and the possibilities for dramaturgical discovery are endless.

According to The Art of Active Dramaturgy: Transforming Critical Thought Into Dramatic Action by Lenora Inez Brown, playwright Laurie Brooks invented the Forum, a talkback with the intention to “conclude the action [of a performance] and help young audiences develop their critical reading skills” (Brown, 166). In her essay “Put a Little Boal in Your Theatre: A New Model for Talkbacks,” Brooks explains that many of the post-show discussions she had attended were shrouded in “clichéd queries” that denied the audience the chance to further explore the material they just experienced. She felt that post-show discussions were an opportunity for the audience to engage with one another, but with the way that talks were being formatted, they usually didn’t ask anything more in-depth than “how did [the actors] learn all of those lines?”

Working with The Coterie Theatre on her play The Wrestling Season, Brooks set out to challenge audiences with a new approach to the talkback. The Forum’s goal was to invite the audience to engage with the material they just experienced in a setup that “allowed the audience to reach their own reckoning,” as opposed to reaching a prescribed lesson. In this first Forum, a neutral discussion facilitator asked the audience to respond to what they thought of the “morally ambiguous characters” and their actions in the play while the actors improvised responses to those thoughts while remaining in character. Because there was no script or desired outcome, the people behind the project (including Brooks herself) were petrified that the discussion would spiral out of control. To their delight, the portion of the audience that chose to attend the Forum was enthusiastic and participated with passion.

Since The Wrestling Season’s premiere in 2000, the Forum has become a chameleon in the theatre world, adapting to each production, theatre, and audience’s needs. While the core mission remains the same (to facilitate a discussion with the goal of diving deeper into the play and production), there have been many iterations of the talkback format that have further progressed the practice. The Meighen Forum is, in my opinion, one of the most inventive and inspirational innovations to the practice of talkbacks.

Known as the Stratford Festival Forum until the name change in 2019, the Meighen Forum was created by Stratford Festival Artistic Director Antoni Cimolino in 2013. Its mission is to illuminate the audience’s experience of a performance by going above and beyond to provide willing audiences with knowledge that will hopefully encourage further exploration of a play or topic. Post-show discussions are still a cornerstone aspect of the Forum, but they are accompanied by other learning opportunities, including discussions that feature knowledgeable speakers and/or panels digging into a particular topic, readings of new work, workshops open to the public, and much, much more.

While the Strat Fest’s 2020 season is unfortunately a wash, it has (like many other theatre and performance venues) generously uploaded archived performances from previous seasons on their YouTube channel to make sure that theatre lovers are able to get a digital fix. Along with the “Online Shakespeare Festival,” The Strat Fest’s YouTube channel has compiled a list of recorded Meighen Forum sessions, some of which coordinate with the shows being streamed. Here are brief summaries of some of the Forums I have enjoyed watching so far.

In 2018, the author of The Handmaid’s Tale paid a visit to an absolutely packed house to talk about The Tempest, which the Strat Fest was showcasing that summer. Atwood, a celebrated Canadian author, was invited to speak on the play because she had recently published Hag-Seed, a novel (in both definitions of the word) retelling of the play. Hag-Seed was the first of many books that publishing company Hogarth Shakespeare commissioned, inviting various authors to retell Shakespearean plays in book-form.

Out of the entire canon, why did she choose The Tempest? “It was the only one I wanted to do,” she answers in a matter of fact manner. While looking through the Shakespearean canon for the script she was going to be spending a lot of time with, she discovered that every character in The Tempest was being “imprisoned” in some way (“except Miranda, but she doesn’t know it because she doesn’t know anything else,” Atwood clarifies), which planted the seed to set Hag-Seed in a prison. The conversation bounces between Hag-Seed, anecdotes from Atwood’s extensive research process about The Tempest, and of course, the legacy of The Handmaid’s Tale.

Most people are good at one thing, but Atwood is just as well versed in writing dystopian literature as she is in Shakespearean knowledge and cracking jokes (about Shakespearean fairies, not Handmaids). She isn’t afraid to share her opinions about which parts of the canon she favors over others. When it was mentioned that the Stratford Festival would be producing Henry VIII in the 2019 season, Atwood commented “everyone will see [Henry VIII] because it’s never done.” She allowed herself a brief dramatic pause, smiled mischievously, and then added: “for good reason.”

In the first Meighen Forum recording uploaded to the Strat Fest’s YouTube channel, guest speaker and staff writer at The New Yorker Adam Gopnik shares “a horribly well-researched thesis on Elizabethan feasting and its manners,” ironically, at what looks like a celebratory meal. He begins by diving into some of the Shakespearean phrases about food we’re all familiar with, but asserts that “if you actually go back and look… the phrases are about suffering.” He uses the ubiquitous example of “if music be the food of love, play on,” from Twelfth Night as an example, acknowledging that most people cut the next part of the line, “give me excess of it, that surfeiting, the appetite may sicken and so die.”

Why there’s a connection between food and suffering in Shakespearean works is not a coincidence. Gopnik argues it’s due to the Puritan values under which Shakespeare was raised. In preparation for his talk, Gopnik went into “dietaries” (literary works about food) from the 1580s and discovered that they were, in his words, “not books about the pleasures of the table,” but “books about the perils of gluttony.” The positive connotations we have in the 21st century about the abundance of food being a good thing was a “much later development in Western thinking;” Shakespeare lived in a time of “famine and fear,” where there wasn’t much food to begin with and overconsumption of anything was considered a sin.

With this new lens, Gopnik spends the remainder of the talk dissecting Shakespeare’s most famous and beloved glutton: Falstaff.

This was by far and away one of the most thought-provoking and educational talks I have ever experienced, and I highly recommend watching it. This talk gathered a panel of actors in the Stratford company to talk about, in the host Dr. Adrienne Harris’ words, “identity and difference.” In true Forum fashion, the goal of the talk was not to come to a single solution, but to “shake up our expectations,” “[reveal] our biases and anxieties,” and make space for important conversations that need to happen in order to create more impactful theatre and a better informed theatre community.

Dr. Harris kicked the Forum off by inviting the actors to share their experiences working in the theatre, what they took away from important moments in their lives and careers, and their goals for the future of the theatrical world as a whole. Many of the participants shared the moment where they discovered they were “different” in the eyes of the theatre, various microaggressions they’ve faced throughout their careers, and sentences that stuck with them throughout their lives. The sentence that shocked me the most was when panelist Anusree Roy told the story of when she was rejected from collegiate acting programs, someone told her that “[the colleges] know you’re not going to play leads [because of your race], so they [didn’t] want to waste a spot.”

However, the participants also talked about what they’ve learned from their experiences, and what they now actively do (and encourage others to do) in order to counteract implicit biases on the stage. Roy discussed how she only accepts roles in shows that align with her morals, because “[she would] regret being in that [rehearsal] room if it’s not the right room.” Panelist E.B. Smith urges theatres to expand and redefine the definition of “classical theatre” to include the “countless plays from other cultures,” and for the “administrative structures of theatre… [to] diversify, immensely.” Panelist Jani Smith asserted the importance of rehearsal rooms and audiences having an “open and conscious mind,” because “that’s when the art truly transcends into something great.”

Towards the end of “Implications of Inclusivity,” E.B. Smith makes the point that “what we do on stage, the images we present, have larger ramifications, they have an implication beyond just the words we’re saying and the characters we play on stage.” Theatre has the power to extend an invitation to an audience to explore adventurous, complex, and at times uncomfortable topics, but this power can only be harnessed if the cast and creative team have invested their time, energy, and hearts in the work, and the audience walks in the room with an open mind. Making space for participants who wish to go above and beyond by sharing their takeaways from the performance in a Forum is a way to not just reexamine the show, but to realize the potential theatre has to speak to audience members in completely different ways. The more we seize the opportunity to allow artists and audiences alike to speak their minds, the more we are able to expand our horizons, and in doing so, step out of our comfort zones. Stepping into a Forum is a brave choice to engage in a discussion that might poke and prod at everything: from the meaning of a stage direction to personal beliefs. But it is the commitment to meaningful conversation in post-show discussions, the commute home, and online events that will ultimately improve theatre for the better, and challenge the people who frequent the theatre as well.

If you can, please consider donating to a theatre near you (or not near you) to make sure performances and meaningful conversations will be something that we can continue to learn from and enjoy in our post-COVID-19 new normal.