Divorced, beheaded, died, divorced, beheaded, survived: a mnemonic burned into the memory of anyone with a fleeting knowledge of Tudor history but soon to be replaced by the irresistible Europop-cum-Greensleeves-cum-Destiny’s Child earworms in Six, the vampy, campy, scream of a musical about the wives of King Henry VIII, written and directed by Toby Marlow and Lucy Moss.

The show–in which the wives are a girl band and each member attempts to usurp the others in song with how much worse they suffered with their mutual “famous ex”–has been a word-of-mouth sensation since it opened in 2017, and is about to begin its second West End run, just extended to January 2020 at Arts Theatre after a nationwide tour. Dates in Chicago have also been announced.

For him, the success of Six is “overwhelming and bemusing.” Moss says for a second before its debut they imagined doing a week in London.

“We laughed at ourselves for being so self-indulgent…now it’s like a horrifying joke that’s gone too far.” 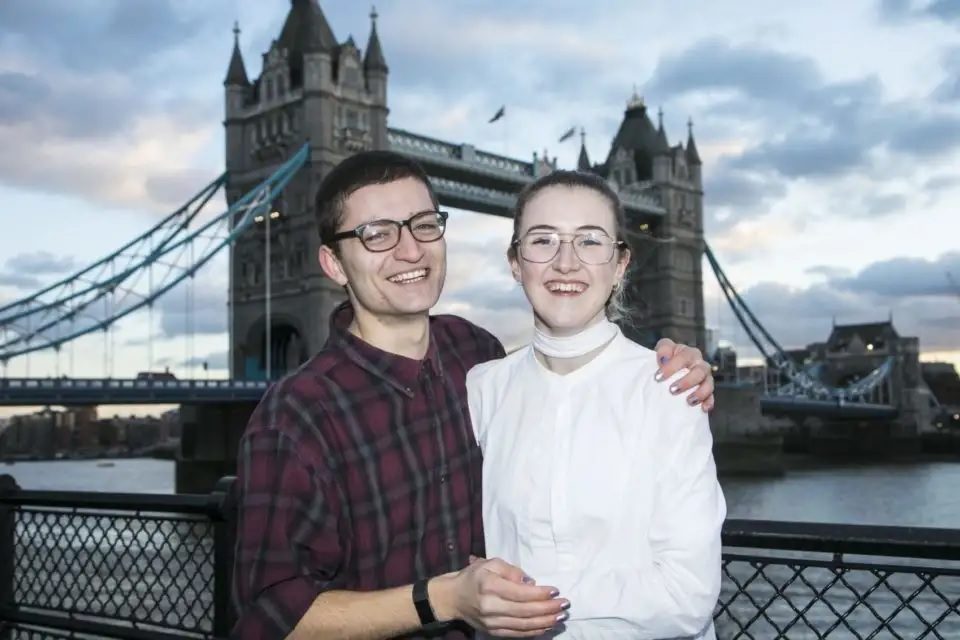 Marlow and Moss are both 24. They met at university–Cambridge, but they just say “uni” and it is clear they are conscious of their privileges. They became friends working on theatre productions, Moss had been at dance school for two years before studying history (she was racing to finish her dissertation on American musical choreographer Busby Berkeley while writing Six) and spent all her time directing and choreographing.

Marlow, who had been a child actor, studied English and always imagined he might do an EP afterward and become a singer-songwriter, “Ed Sheeran vibes.” Both of them still worry that two years down the line they’ll be forced to give this up and do a law conversion.

They are very young to have their own musical of this scale, and show business can be a daunting and exclusive world. Initially, Moss attempted to “look like a grown-up, pretend I know what I’m doing” but now prefers Marlow’s approach in embracing his relative inexperience. At the beginning, “We had to ask what a producer was.” They have rarely found people snooty or condescending, but if they are it’s “usually with good reason…We are just babies” says Marlow.

“People don’t treat us like we’re bottom of the ladder.”

I am not surprised: they are garrulous, but clearly meticulously thorough, considered, and in control.

Toby describes their relationship as “weird married siblings” which seems about right. We meet in the basement dressing room at Trafalgar Studios, where they’re one night into the run of their second musical, Hot Gay Time Machine, which chronicles experiences of coming out.

Given all the bizarre and entertaining tangents that are dissected in detail as we talk–Jessie J’s Chinese fame, the snobbery about pop music in A Star Is Born–I wonder how they get anything done: writing involves “us in a room together staring at each other until something happens” and they recently rented a studio in Dulwich, “far from everywhere” (she lives in Bethnal Green, he is a friend’s parents’ house on the Strand) to help them concentrate.

They speak rapidly, constantly self-deprecating, cracking intelligent jokes and quick to acknowledge anything that might be misunderstood as inflated or uninformed. It is not performative millennial “wokeness” but an earnest desire and responsibility to get things right when “so much of the great entertainment we love always has a horrifyingly problematic message, or is really outdated,” as Moss puts it.

When it came to the concept of Six, Marlow was savvy.

“At Edinburgh, everyone’s shoving flyers in your face, so if you want people to come to your random production you’ve got to make sure the subject is something people recognize. A classic example is Wicked–the backstory to The Wizard Of Oz, done in a funky way. ‘Ooh, what’s that?’” 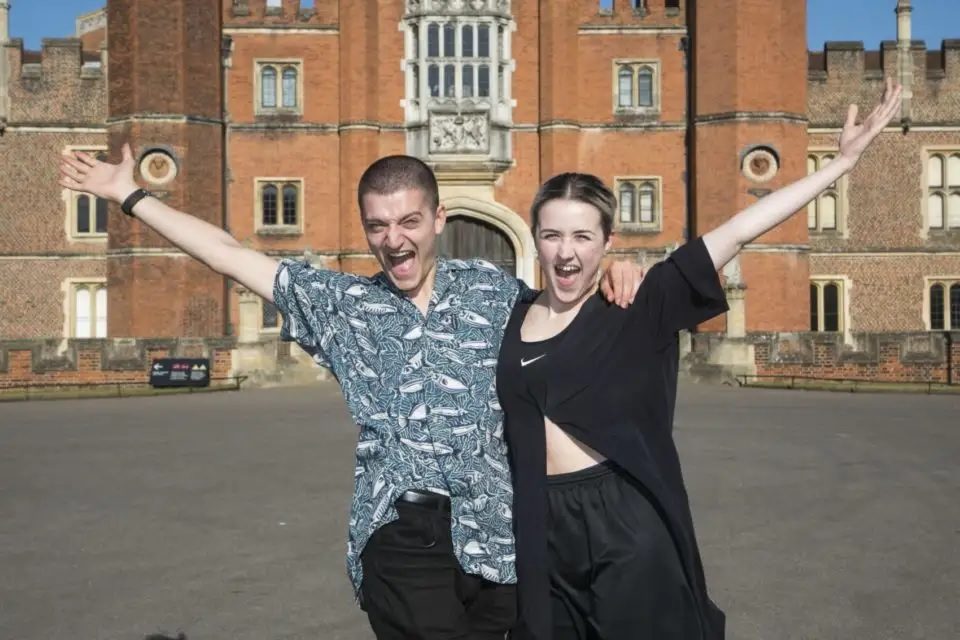 He thought about groups of women from history or literature that hadn’t been fictionalised in musical theatre before. Early ideas included The Real Housewives of Shakespeare and a musical backstory to the witches of Macbeth, but he landed on the wives of Henry VIII and–“because I’m super gay and love pop stars”–came up with the girl band pop-concert idea during a poetry class and thought “Need Lucy, need Lucy!”

Six is cheeky, ironic, musically polished and full clever nods to influences like Beyoncé and Ariana Grande and Little Mix with acerbic historical references in lines like “Ladies let’s get in reformation” and “I tried to elope but the Pope said ‘nope.’”

Asked about their inspirations, instead of the usual “Rodgers and Hammerstein” they launch into a discussion about the American screenwriter Amy Sherman-Palladino (creator of Gilmore Girls and The Marvelous Mrs. Maisel) for Moss and for Marlow, the Swedish songwriter and producer Max Martin–writer of Britney Spears’s Baby One More Time and–their favorite–Katy Perry’s Teenage Dream, among other masterpieces.

What’s more important when you’re writing a show: its message, or its entertainment value? Moss and Marlow are delighted when I tell them my sister saw Six on a girls’ night out–“that’s exactly what we wanted”–but it’s clear they are fiercely aware of the need for a deeper, progressive meaning.

“It would be great if we lived in a world where everything that was fun didn’t reinforce horrible stereotypes like Disney,” Moss says.

Before they started writing they had a “pretentious” six-point plan for the show’s intentions.

It included “Meaty roles for women–we have friends who are really funny performers who never had the parts. Show parallels in the female experience between 500 years ago and today, show that women can tell amazing stories without men being present, that they don’t have to be about men to be funny, do it within something that’s first and foremost to entertain and is completely aware of its own silliness and campness and not too earnest or sincere.”

Quite a mission statement, then, and one that hindsight (and a handful of criticisms of the show’s take on feminism) has forced them to assess.

“The feminism of Six isn’t revolutionary in any way,” says Moss. “It’s very 2017. If we were writing it now, we wouldn’t be thinking about women in the same way.” She says that “the fact that the wives talk about Henry VIII the entire time, and don’t pass the Bechdel Test [which measures whether a work features two or more women who talk to each other about something other than a man], is kind of half the point but also a bit of a disaster.”

For Marlow, “If I went to see Six, not having written it, I’d be like ‘It’s really fun, songs are fun, but six straight narratives shoved down my throat, again.’ It’s a bit ‘girl power.’ I’m proud of Six and I love it, but I feel like we’ve also learnt from it. The narrative we chose to tell didn’t allow for much cutting-edge feminist message…But then who are we to write about queer black feminism?”

Moss also frets about their tongue-in-cheek treatment of some of the wives. Take Anne Boleyn, recast here as a ditzy smartphone addict.

“We’ve reduced her to this idiot. Fourteen-year-old girls come away and say ‘I’m obsessed with her, she was so funny’ but with no idea that she was one of the most accomplished, witty, artful, brilliant, savvy women in history.”

That is, of course, part of the whole joke, but she worries that perhaps “the commercial poppy sparkly extravaganza that this show is can cloud what it’s trying to say”.

Something that plays on both their minds is “How do you shift the boundaries of what is considered to be broadly appealing?” Moss has friends whose fathers have seen Six thinking they’d hate it, but had a brilliant time.

“Maybe after that, they’re more likely to go and see something with a bunch of women that will push the boundaries more than we have.”

Marlow is quick to point out that too often when intending a show to be broadly appealing, the assumption is “that audiences should be cis-het white men. Why are they the ones we should be impressing?”

The only way forward is never to settle for “good enough,” so they welcome and heed criticism of their work.

“I think you should keep complaining. We have the diversity and representation that we have at the moment–still a fraction of what it will be one day–because people in the margins of society complained,” Marlow says.

Still, Six stands out: an all-female cast, all-female band, and open casting that encouraged any woman (or non-binary person) who could sing pop, of any age, body shape, and ethnicity to audition, is still rare, and the pair are immensely proud of it.

“I hope it reflects the diversity of talent that we look to employ,” says Marlow. “People come to Six for a great night and see a stage filled with 10 insanely talented brilliant women just being amazing.”

This article originally appeared in iNews on January 16, 2019, and has been reposted with permission. 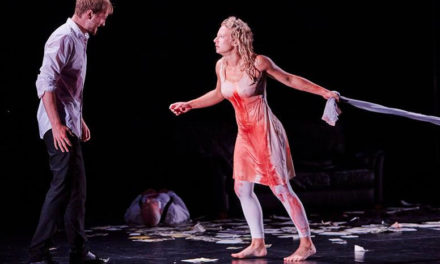 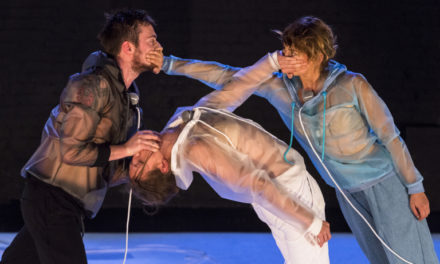