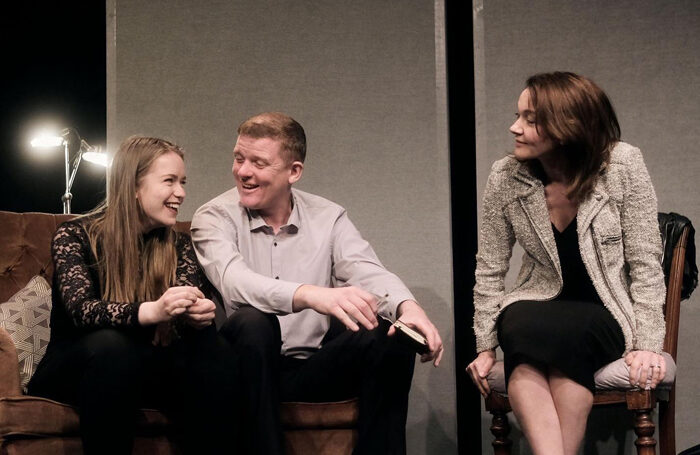 Last performed at the National Theatre, Simon Stephen’s Harper Regan is great at making an audience uncomfortable. His drawn-out scenes build tension to the point that it is totally unbearable, and Contentment Productions bring their own sense of intensity to this writing that for the most part works, but can sometimes feel slightly tired and draining for the audience.

At the helm of this production is Emmy Happisburgh, who plays the title role of Harper, and is the founder of Contentment Productions. A woman who finds herself at the whim of everyone around her, she leaves her home one night without telling anyone where she is going. The result of this is her confrontations with fears and secrets that she has held deep within her, and more often than not, lead to strange and tense situations.

Her performance is a total tour-de-force, with Happisburgh appearing in every scene and leading the story with elegance and raw energy that scorches throughout. Her chemistry with the other actors is clear, particularly between herself and Cameron Roberston, who plays a man she meets after an online encounter, as well as Joseph Langdon, a teenage boy who she meets by a canal near her London home.

The complicated and flawed nature of all the characters is interesting to watch, and as Harper encounters various people in her two days away from her family, we notice the inherent difference between the way Harper acts when she is with them and the way she is when she is not. Her sharp and combative conversation with young Mancunian journalist Mickey (Marcus McManus) is particularly good, as Harper slips into an alternate version of herself – one that is abrasive, overtly sexual and ultimately violent.

Stephens writing is clever in this way, as it establishes the power shifts between women and men and the way in which many women alter themselves depending on who they are with. The role of Harper’s daughter Sarah (Bea Watson) is a great juxtaposition to this, as she is written as a young woman who is completely sure of herself, intelligent and strong.

The cast is a lovely ensemble and works together to create a story that is often untold, focusing on a group of people who are not tied up neatly with ribbons, but who express their own strange habits and flaws. However, some of the scenes do tend to drag and the audience grows restless at points, as the text tends to be overly wordy and repetitive. Overall though, this show is a strong starting point for a company that are striving to tell more female-led stories.

This article was originally published on The Play’s the Thing UK. Reposted with permission.